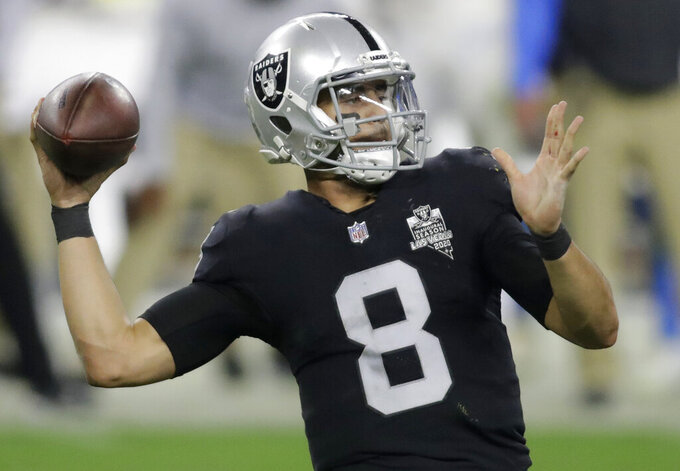 FILE - In this Thursday, Dec. 17, 2020 file photo, Las Vegas Raiders quarterback Marcus Mariota (8) looks to pass against the Los Angeles Chargers during the second half of an NFL football game in Las Vegas. The Las Vegas Raiders placed backup quarterback Marcus Mariota on injured reserve Saturday, Sept. 18, 2021 after he hurt his quadriceps on his only snap in the season opener.(AP Photo/Isaac Brekken, File)

The Las Vegas Raiders placed backup quarterback Marcus Mariota on injured reserve Saturday after he hurt his quadriceps on his only snap in the season opener.

Mariota came on for one play in the first quarter for the Raiders in Monday night's 33-27 overtime win over the Baltimore Ravens. He ran for 31 yards but reinjured his quadriceps and didn't return despite the Raiders having planned a package of plays for him.

Mariota has struggled to stay healthy since signing with the Raiders last season to back up Derek Carr after getting paid more than $12.6 million in 2020-21. He spent the first five games on injured reserve last season and was inactive for the next six.

He provided a spark when he replaced an injured Carr in a Week 15 loss to the Chargers, throwing for 226 yards and a TD and rushing for 88 yards and a score.

The Raiders brought him back this season with hopes of using his mobility in short yardage and the red zone but now he will be out for at least the next three weeks.

Nathan Peterman will back up Carr while Mariota is sidelined, starting with Sunday's game at Pittsburgh.

The Raiders promoted linebacker Marquel Lee from the practice squad to take Mariota's place on the active roster. Lee was a fifth-round pick by the Raiders in 2017 before cutting get last summer. He returned to the Raiders earlier this month but hasn't played an NFL game since 2019.

The Raiders also activated guard Lester Cotton Sr. and running back Trey Ragas from the practice squad for Sunday's game against the Steelers.