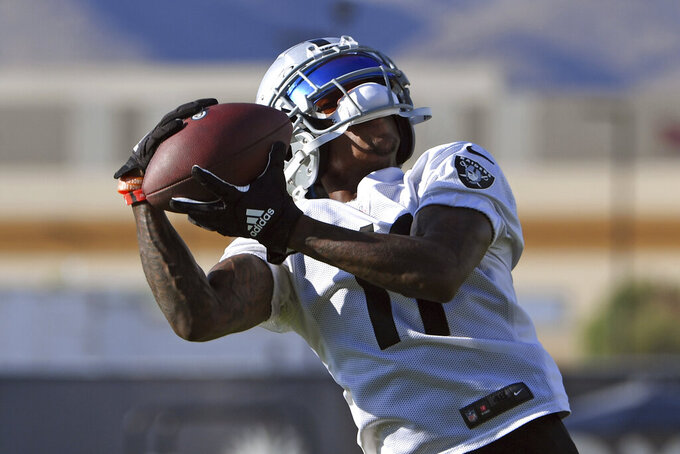 HENDERSON, Nev. (AP) — Las Vegas quarterback Derek Carr says this year's Raiders have a do-it-all group of receivers that he believes are the best he’s had in eight seasons.

“Oh yeah, absolutely, very diverse,” Carr said this week. "(Coach Jon) Gruden is going to get what Gruden wants. He wanted guys at the skill positions that when he thinks of a play, that’s the guy that can do that. And he’s got exactly what he wants so then he can freely call plays and I can freely just read them out.”

Leading the way the past two weeks has been big-bodied Bryan Edwards, who endured an injury-riddled rookie season last year, when he caught just 11 passes for 193 yards and one touchdown in 12 games. Two days into wearing pads at camp, Edwards has showed off his athleticism, going up for passes from Carr on several deep routes.

“He’s running with the (starters) a lot ... he’s making a lot of plays,” Carr said. “Sometimes he’ll catch a ball and he’s so strong that he doesn’t bring it into the body where they can punch it out, he’ll just hold it away from them. Not many guys can do that, but he can.”

Also in his second year and having an impressive camp has been speedster Henry Ruggs, the first receiver taken in last year's draft. The former Alabama standout has looked tremendous out of the gate after falling short of expectations last season and leaving some fans wondering whether Gruden and general manager Mike Mayock made the right choice from a talented crop of receivers who were available.

“I think the big thing with Henry is he’s out here, he’s practicing, and he knows the offense,” Gruden said. “He anticipates what’s going to be called now instead of reacting to what’s called as he’s lining up. We’re seeing really good things from Ruggs and Edwards, really proud of them so far.”

Complementing them is the hard-nosed Hunter Renfrow, who can be likened to a Wes Welker type, and, who in Edwards’ words, is a “Swiss Army knife, tough as nails"; there are the steadily improving Zay Jones and Keelan Doss, both of whom can line up inside or in the slot and can battle defenders deep or over the middle; and there’s newcomers Willie Snead and John Brown, both of whom add experience and wisdom to the receivers’ room.

The Raiders’ pass attack gets even more interesting when you factor in Carr’s No. 1 target last season, Darren Waller.

The sixth-year standout, who is as agile as a receiver but who employs a physical style that makes him one of the most dangerous tight ends, was a major contributor as Las Vegas finished seventh in the NFL last season with 4,217 yards through the air, and 11th with 28 passing touchdowns.

Waller, who missed the last two practices for an undisclosed reason, ranked fourth in the league with 107 receptions and 10th with 1,196 yards receiving.