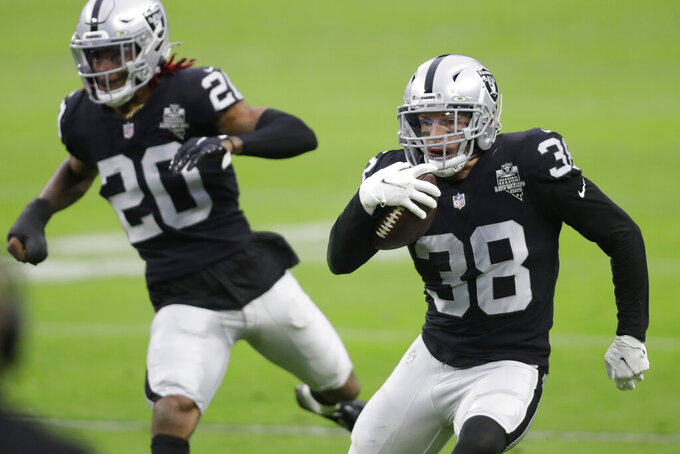 Las Vegas Raiders strong safety Jeff Heath (38) runs after making an interception against against the Denver Broncos during the first half of an NFL football game, Sunday, Nov. 15, 2020, in Las Vegas. (AP Photo/Isaac Brekken)

Preparing to play Patrick Mahomes and the Super Bowl champion Kansas City Chiefs can cause nightmares for opposing defensive coordinators in the best of circumstances.

With speed on the outside in Tyreek Hill, perhaps the best receiving tight end in Travis Kelce and a dynamic rookie running back in Clyde Edwards-Helaire for Mahomes to utilize, the Chiefs have had the NFL’s most prolific offense the past few years.

Now the Las Vegas Raiders (6-3) have to try to slow Kansas City (8-1) down in an AFC West showdown on Sunday night despite missing 10 defensive players, including six starters, in practice this week because of COVID-19 protocols.

“I don’t know how we can beat these guys with a full lineup at practice, let alone three-quarters of your lineup not here all week,” defensive coordinator Paul Guenther said. “We’re playing the world champs. What don’t they have? They have a great quarterback, great receivers, great tight ends, line is physical. And they’re coming off a bye, so it’s a daunting task.”

The Raiders have had issues on defense for much of the year before a recent streak of success the past three games thanks in part to one game in bad weather and a rough outing from Denver’s Drew Lock.

The test of whether those improvements were real was supposed to come this week against the Chiefs but now it will be hard to tell much thanks to the absences.

Starting linebacker Cory Littleton tested positive for the coronavirus last week and missed one game. He hasn’t returned to practice yet and there’s no word on his condition.

The problems only multiplied when starting defensive end Clelin Ferrell was placed on the COVID-19 list Tuesday following a positive test, along with starting slot cornerback Lamarcus Joyner, who was a “high risk” close contact.

Many of those players could return by Sunday if they keep testing negative and have no symptoms, but they will still miss the entire week of practice. They are taking part in virtual meetings and doing whatever conditioning they can at home.

“It’s tough,” Guenther said. “It’s tough enough when you have a full allotment of guys at practice. You’ve got to get them on the Zoom. It’s just not the same when you’re not taking the reps. It’ll be a big challenge for us either way, whoever can play, whenever they can get here to play to get them caught up on the plans of those things.”

Perhaps the only potential bright spot is these teams played last month so the absent players are familiar with the Chiefs.

After allowing 24 points in the first half, the Raiders stiffened up in the second half and allowed only eight points on five drives as Jeff Heath recorded the only interception of the season against Mahomes and the Las Vegas line managed to generate some pressure without blitzing.

But that only goes so far.

“The familiarity part is good, but I think again, it’s a different opponent,” Guenther said. “They’re coming off a bye week. They have changed somewhat over the last three or four weeks since we played them. But yeah, the familiarity of the offense helps in that we aren’t playing an unfamiliar opponent. They’ll have recall on some of those things, so that will be helpful.”