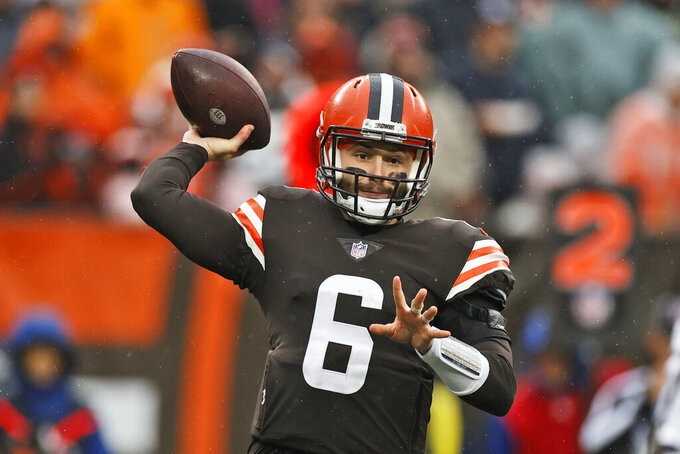 Cleveland Browns quarterback Baker Mayfield throws during the first half of an NFL football game against the Detroit Lions, Sunday, Nov. 21, 2021, in Cleveland. (AP Photo/Ron Schwane)

BETTING LINE: Ravens by 3 1/2, according to FanDuel SportsBook.

TURNOVER DIFFERENTIAL: Browns minus-1; Ravens minus-5.

BROWNS PLAYER TO WATCH: RB Kareem Hunt returns from a five-game stint on injured reserve with a calf injury. Cleveland’s offense missed his explosive playmaking abilities and can use a boost after scoring 17 points or less in six of the past eight games. He’s also a perfect complement to star Nick Chubb, who is coming off a 130-yard performance.

RAVENS PLAYER TO WATCH: QB Lamar Jackson missed last weekend's game because of an illness. He was back on the practice field this week and declared himself healthy enough to play, but even if he's back, he's not coming off the best of performances. Baltimore lost to Miami two games ago when the Ravens couldn't handle the Dolphins' constant blitzing.

KEY MATCHUP: Chubb vs. the Baltimore defensive front. Chubb ranks third in the NFL in rushing and the Browns are No. 1 in the team category after Baltimore led the league the past two seasons. The Ravens have been vulnerable to big plays defensively this year, but they have been strong against the run.

KEY INJURIES: Browns QB Baker Mayfield has been playing with shoulder, heel and knee injuries for weeks. Mayfield said his shoulder, injured in Week 2, has become his “new normal” and the lower-body issues have affected throws. … WRs Jarvis Landry (knee), Anthony Schwartz (concussion) and Donovan Peoples-Jones (groin) and DT Malik Jackson (knee) missed practice time this week. ... Jackson seems on track to return this week, and WR Marquise Brown (thigh) was also back on the practice field after missing last week's game for Baltimore. ... Injuries have been a problem for Baltimore all season: The Ravens lost RBs J.K. Dobbins and Gus Edwards before they even played their opener.

SERIES NOTES: In a scheduling oddity, the AFC North rivals will meet twice in three weeks. ... The Ravens have dominated this series since the team's move from Cleveland created the new franchise in Baltimore. Coach John Harbaugh is 22-4 against the Browns. In the last meeting between the teams, they combined for nine rushing touchdowns, and Justin Tucker's 55-yard field goal with 2 seconds left won it for the Ravens. ... Cleveland has dropped 10 of the past 13 against Baltimore, with two of the wins coming in overtime.

STATS AND STUFF: Despite drama, injuries and inconsistency, the Browns are still positioned to challenge for the AFC North title and make the playoffs. … Cleveland’s narrow win over Detroit felt more like a loss, and Mayfield compounded issues by glumly walking off the field and ducking his postgame interview. Mayfield said he was frustrated with his play. … Cleveland’s offense has lacked firepower of late, so Hunt’s return should help as the Browns deal with numerous injuries at receiver. … Mayfield passed for 343 yards and two TDs in the most recent matchup with the Ravens — one of last season's most exciting games. ... Chubb returned last week after missing one game with COVID-19 and was instrumental in the win, picking up 68 yards in the fourth quarter and helping run out the clock. ... Browns two-time Pro Bowl RT Jack Conklin could be back after missing three games with an elbow injury. ... Browns DE Myles Garrett leads the NFL with 13 sacks. His career high is 13 1/2 and the club record is 14 set by Reggie Camp in 1984. ... Garrett has just 1 1/2 sacks in six career games against the Ravens. ... The Browns lead the AFC with 29 sacks. ... Harbaugh's teams shine under the lights. The Ravens are 17-2 in prime-time games during his tenure. ... Jackson has rushed for at least 100 yards in two of the last three meetings with the Browns, including 124 and two touchdowns in the most recent matchup. ... Jackson is one of five players in the NFL with 600 yards rushing in each of the past four seasons. ... LB Tyus Bowser had two sacks and a forced fumble last weekend. ... This will be Baltimore's fifth night game of the season. The Ravens lost at Las Vegas and beat Indianapolis in Monday night games, beat Kansas City on a Sunday night and lost at Miami on a Thursday night.

FANTASY TIP: The Browns have traditionally struggled against quality tight ends and Baltimore's Mark Andrews is certainly one of them. He's feasted on Cleveland, scoring five touchdowns in six career games.