Ravens open camp with new cast while delving into unknown 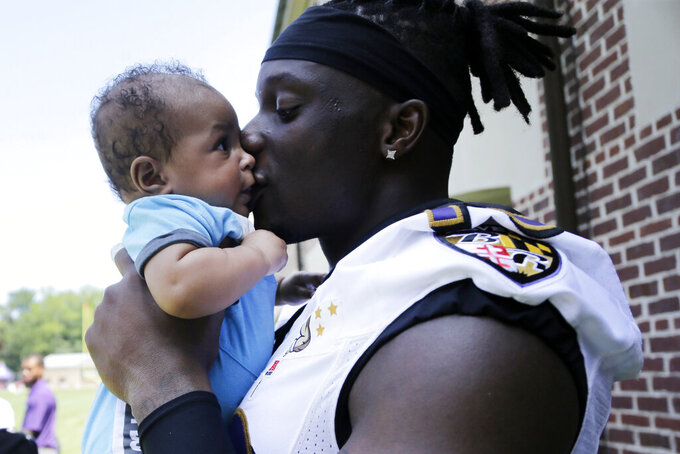 The Baltimore Ravens opened training camp Thursday with a revamped roster, a rewritten playbook and a starting quarterback who last summer didn't have a lick of NFL experience.

Operating in idyllic temperatures and under a clear blue sky, the Ravens began the process of coming up with a sufficient encore to last season, when they won the AFC North to reach the playoffs for the first time in four years.

Much has changed since rookie QB Lamar Jackson replaced Joe Flacco and fueled a 6-1 finish that earned Baltimore its first home postseason game since 2012.

After taking over for Ozzie Newsome as general manager in January, Eric DeCosta was put into scramble mode after the defense lost Terrell Suggs, Eric Weddle, C.J. Mosley and Za'Darius Smith to free agency. DeCosta signed free agent safety Earl Thomas to replace Weddle, but the league's No. 1 ranked defense in 2018 will be pressed to find pass rushers to replace Suggs and Smith, who combined for 15 1/2 sacks.

Just as important, this training camp will go a long way toward determining how good a replacement Patrick Onwuasor is for Mosley, a standout middle linebacker who led Baltimore in tackles in each of the past two years before leaving to join the New York Jets.

"It really doesn't matter who we lost," outside linebacker Matthew Judon said. "Those were some key guys, but we're going to have guys step up."

On offense, free agent running back Mark Ingram will spend the summer learning an attack designed by offensive coordinator Greg Roman, who overhauled the playbook after replacing fired Marty Mornhinweg.

"It's a different type of an offense, we've expanded our defense and we'll be doing things we haven't done before," coach John Harbaugh said after practice. "There will be some unknowns. We need to find out what we do well, what we don't do well, and see what direction our capabilities take us."

Suggs was the defensive leader and Flacco was the voice of the offense last summer. New mentors will likely emerge in the weeks ahead, but for now, the makeup of the team on the field and in the locker room is probably going to take some getting used to.

"The Ravens of this year are not like the Ravens of last year," defensive tackle Brandon Williams said. "Coming in, it feels like a new team. But at the same time, we know our mission."

Baltimore has every intention of getting back to the playoffs, and this time the team intends to get far beyond the first round. The process started Thursday and will continue right up to the opener in Miami on Sept. 8.

"We just have to keep working at it every day," Ingram said. "These training camp practices, it's a race to get better."

The offense will center around Jackson, the 2016 Heisman Trophy winner who starred after taking over for an injured Flacco on Nov. 18 against Cincinnati. Jackson's ability to run, pitch and throw makes him a weapon unlike Harbaugh has ever had before.

Jackson ran for a whopping 695 yards last season. That part of his game needs no improvement, but he threw for more than 200 yards only once, and thus will focus this summer on building a rapport with a variety of receivers , most notably top draft pick Marquise Brown.

Brown is still recovering from a foot injury, but he passed the team's conditioning test and could be on the field as soon as next week.

NOTES: DT Michael Pierce was delighted to be practicing after being deemed ineligible for minicamp for being out of shape. Pierce lost around 30 pounds since then, despite taking a vacation in Italy. "Very impressed with the progress Michael Pierce has made," Harbaugh said. ... G Jermaine Eluemunor, RT Orlando Brown Jr. and LB Shane Ray failed the conditioning test and did not practice.