Ravens without top 2 QBs after Huntley lands on COVID list 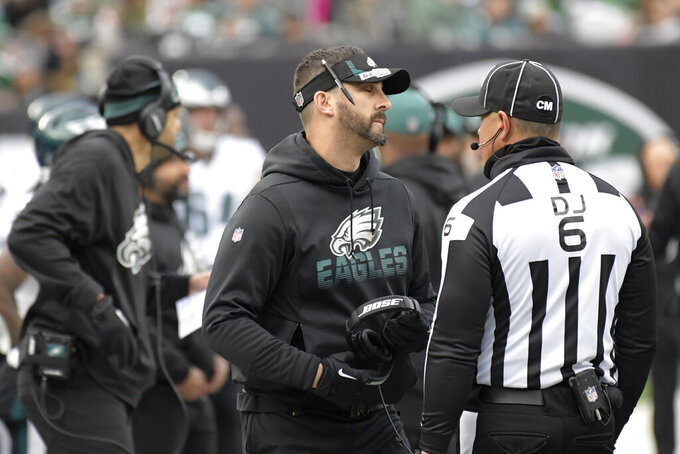 The Baltimore Ravens put quarterback Tyler Huntley on the reserve/COVID-19 list Saturday, leaving them without their top two QBs for Sunday’s showdown at Cincinnati for first place in the AFC North.

Lamar Jackson missed last week’s game with a sprained ankle, and the Ravens announced this weekend that he would not travel with the team. Huntley played well in Jackson’s place in last weekend’s loss to Green Bay, but now Josh Johnson is the team’s top healthy quarterback.

The Ravens signed the 35-year-old journeyman Johnson before last week’s game. He appeared in three games earlier this season for the New York Jets.

It’s been one major blow after another for the Ravens ever since running backs J.K. Dobbins and Gus Edwards went down with season-ending knee injuries before the season even began. Baltimore has more than a dozen players on injured reserve and several more on the COVID-19 list.

The Ravens (8-6) have managed to hold at least a share of first place for almost the whole season, but they would fall out with a loss to the Bengals (8-6). Baltimore activated quarterback Kenji Bahar from the practice squad.

Cincinnati got back CB Chidobe Awuzie from the COVID-19 list, but also had to place two defensive linemen, D.J. Reader and Wyatt Ray, on that list.

Philadelphia Eagles coach Nick Sirianni has cleared the NFL's COVID-19 testing protocol and will be on the sideline for Sunday's game against the New York Giants. The team said Sirianni returned to its facility on Saturday morning.

The Eagles (7-7) are hoping to secure a playoff spot with a strong finish to the season. They have won two in a row and four of five overall.

New York Jets coach Robert Saleh was ruled out for the game against the Jaguars on because he didn’t clear COVID-19 protocols Saturday. Tight ends coach Ron Middleton will assume the head coaching duties.

Saleh tested positive for the coronavirus Wednesday and needed to have two negative tests by Saturday afternoon to return to the sideline. The coach has been quarantining in a hotel while running team meetings remotely.

The first-year head coach said he called Cleveland coach Kevin Stefanski earlier in the week to get some feedback on how he handled not being on the sideline twice because of COVID-19: a playoff game last season and the Browns’ 16-14 loss to Las Vegas last week.

“He said, ‘Well, everything is going to be fine. It’s all virtual anyway. You’re just going to miss practice, but Sunday is going to be miserable,’” Saleh said of his conversation with Stefanski. “So, I’m looking for misery.”

The Jets have been hit particular hard this week by a surge of COVID-19 cases. There were 18 players on the active and practice squad rosters — including injured reserve — on the COVID-19 list Saturday. They elevated tight end Dan Brown, wide receiver DJ Montgomery, offensive lineman Isaiah Williams, defensive lineman Ronnie Blair, linebacker LaRoy Reynolds and safety Elijah Benton from the practice squad.

— Kansas City, which hosts Pittsburgh on Sunday, will be significantly strengthened as star tight end Travis Kelce and wideout Tyreek Hill have been activated. The Chiefs, who have won seven straight games to take over the top spot in the AFC, also get back linebacker Nick Bolton, and tackle Lucas Niang.

— The Los Angeles Rams placed veteran offensive lineman Andrew Whitworth on the team's COVID-19 list. The 40-year-old Whitworth is a key performer for Los Angeles' high-powered offense in his fifth year with the team. The four-time Pro Bowler has appeared in 13 of the Rams' 14 games this season.

Los Angeles (10-4) is tied with Arizona for the NFC West lead heading into Sunday's game at Minnesota. The Rams have won three in a row.

— The other LA team, the Chargers, will be missing two of its top players, Mike Williams and Austin Ekeler for Sunday's game at Houston. Wideout Williams has a career-high 64 receptions for 964 yards and seven touchdowns. It is the second time Williams has been in league protocols this season, following leading up to the Dec. 12 game against the Giants, but from which he tested out. Williams is unvaccinated and will also miss the Chargers’ Jan. 2 game against the Broncos.

Running back Ekeler said on Instagram he has tested positive. Also out are center Corey Linsley and linebacker Joey Bosa.

— In their game Saturday against Cleveland, the Packers were missing cornerback Kevin King and placed practice squad linebacker La’Darius Hamilton on the COVID-19 list.

For the late game Saturday, the Colts took a hard hit when they placed 2020 All-Pro linebacker Darius Leonard on the list. Leonard has been their defensive leader since winning Defensive Rookie of the Year honors in 2018. Indianapolis also will be without safety Khari Willis and wide receiver Zach Pascal at Arizona.

—- Seattle activated reserve defensive lineman Kerry Hyder Jr. off the list but added CB Bless Austin to it. Austin’s addition means John Reid could be in line to make his first start at cornerback on Sunday against Chicago. Austin started last week with D.J. Reed on the virus list. Reed has not been cleared to return from the virus list.

Seattle also announced linebackers coach John Glenn has been cleared to return after missing last week due to the virus.

— Against New England, Buffalo will have back offensive lineman Dion Dawkins but will miss two assistant coaches. Eric Washington will be replaced as defensive line coach by Jacques Cesaire, while Matt Smiley will handle special teams in place of Heath Farwell.

— Offensive tackle Nate Solder and defensive tackle Danny Shelton were added to the list by the Giants. Solder opted out of the 2020 season.

—The Titans, who beat San Francisco 20-17 on Thursday night, put a fourth offensive lineman — and third starter — on the list, right guard Nate Davis. It’s the fourth straight day the Titans have placed a lineman on the list: left guard Rodger Saffold, reserve Kendall Lamm — who wrote on social media he tested positive before being placed on the reserve list hours before the game against the Niners — and Taylor Lewan. He missed that game with a back issue only to go on the COVID-19 list Friday, though he wrote on social media that he had no symptoms. Davis started against San Francisco.