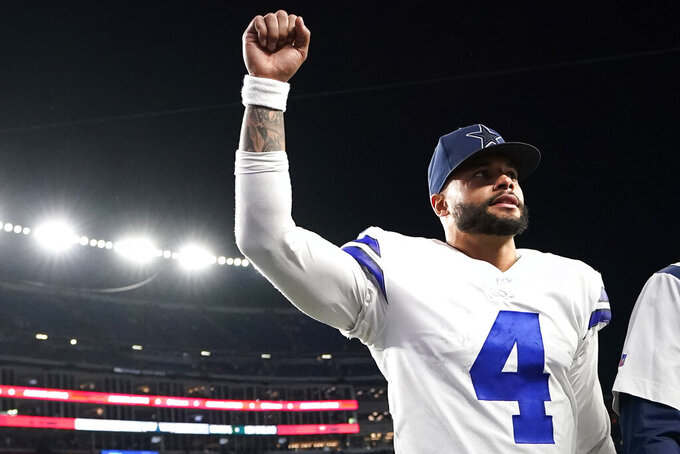 OPENING LINE: Cowboys by 1, according to FanDuel SportsBook.

TURNOVER DIFFERENTIAL: Cowboys plus-7; Vikings plus-2.

COWBOYS PLAYER TO WATCH: DE Randy Gregory is finally thriving six years after the Cowboys gambled on him in the second round. Off-the-field issues were the concern, and they derailed the oft-suspended former Nebraska standout for about four seasons. Gregory has a pair of two-sack games to lead Dallas with four sacks. One against New England forced a fumble that Dallas recovered, and that came one play after Gregory drew a holding penalty that negated a touchdown.

KEY MATCHUP: Vikings CBs Bashaud Breeland and Cameron Dantzler vs. Cowboys WRs Amari Cooper and CeeDee Lamb. With 11-year veteran Patrick Peterson (hamstring) out for at least three games, Dantzler will take his starting spot on the outside.

KEY INJURIES: Cowboys QB Dak Prescott’s strained right calf will be discussed ad nauseam, possibly even up until game time. The Cowboys have been cautiously optimistic about his status since the results of the first MRI test after his injury on the winning touchdown pass against New England, and owner/GM Jerry Jones is confident Prescott will play. ... Cowboys WR Michael Gallup was activated off injured reserve. He hasn’t played since the opener because of a calf strain. ... The Cowboys have placed DT Brent Urban (triceps) and backup CB Maurice Canady (concussion) on IR, sidelining each player for at least three weeks. ... DT Michael Pierce (elbow) was the only starter not practicing for the Vikings on Wednesday. He missed the last two games before the bye. ... Peterson went on IR and will miss a game due to injury for the first time in his 11-year career.

SERIES NOTES: The Cowboys have won three of the last four meetings, including on the road in 2016 and 2020. Their last loss at Minnesota was at the Metrodome in 2010. ... Backup QB Andy Dalton, with Prescott out with a broken ankle, threw the go-ahead TD pass to TE Dalton Schultz with 1:37 left to lift the Cowboys past the Vikings last year. ... Seven of the all-time matchups have come in the playoffs. The Cowboys are tied with the Rams as the opponent the Vikings have faced most often in their postseason history. ... Cowboys head coach Mike McCarthy, who was Green Bay's head coach for 13 years, is 16-9-2 in his career against the Vikings, including last season's win with Dallas. The 27 matchups are the most he's had against any opponent.

STATS AND STUFF: Cowboys CB Trevon Diggs would set an NFL record with an interception in this game, giving him at least one in the first seven contests to start a season. The overall longest streak in league history in eight straight games. ... The Cowboys have the NFL's longest active streak with multiple takeaways at 10 straight games, tied for the best run in franchise history. ... Prescott is the first Dallas QB with at least three touchdown passes in four consecutive games. Tom Brady has the NFL record with 10. ... The Cowboys have at least two straight games of 500-plus yards of total offense for the second year in a row. Last year, they hit that mark for a club-record three consecutive games. ... Micah Parsons has 2½ sacks and could join DeMarcus Ware, Victor Butler and Anthony Spencer as the only Cowboys rookie LBs with three sacks in a season. ... Cousins has 20 career games with at least 300 passing yards, three touchdown passes and a 110-plus passer rating. That’s the most by any player in his first 10 seasons in NFL history, one more than Aaron Rodgers. ... The Vikings are tied with the Bears for the league lead with 21 sacks, despite playing one fewer game. ... The Vikings have allowed only nine sacks, tied for the lowest six-game total in team history. ... Vikings WR Justin Jefferson has at least five catches in nine straight games, the third-longest active streak in the NFL.

FANTASY TIP: Cowboys RB Tony Pollard totaled 24 carries and seven receptions over the last two games despite being firmly behind Ezekiel Elliott on the depth chart. Pollard had a 42-yard touchdown run against the Vikings last year.