Rhule not ready to throw in towel on Bridgewater 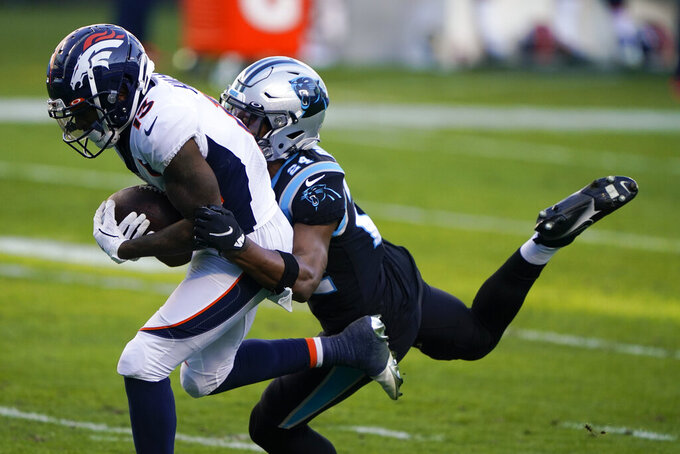 The Panthers' first-year coach still believes Bridgewater can be the quarterback who helps set the foundation for a winning franchise, even though he is 3-9 in 2020 as a starter.

That’s why Bridgewater will remain the starter for the rest of the season — and possibly the foreseeable future.

Bridgewater came under more scrutiny Sunday after the Panthers failed to pick up a first down on their final drive and lost 32-27 to the Denver Broncos. It continues a frustrating pattern in which Bridgewater has had the ball in his hands with a chance to win or send the game into overtime late in a game only to come up short.

“There are always going to be lightning rod topics, I get it,” Rhule said. “But I hate putting games like this on one guy, because we could have gotten run out of the building like we did (earlier this season) against Tampa Bay."

It's easy to overlook that Bridgewater led the Panthers to 17 points in the fourth quarter, mostly putting the game on his arm and legs. And it's easy to forget he did it once again without Christian McCaffrey in the backfield, who missed his 10th game because of injuries. Bridgewater didn't have wide receiver D.J. Moore (COVID-19/reserve) either, or his left tackle Russell Okung down the stretch after he reinjured his calf.

Still, Bridgewater did what he has done all season — he gave his team a chance.

Now he just has to finish.

Rhule is confident that will eventually happen.

“As we all know Teddy is going to be measured by the end of game, take it down there and go win. It hasn't worked out here, but a lot of other things have," Rhule said. "So I'm of the mindset that we have to build around him and build with him and go win this game (Saturday night) against Green Bay."

The bottom line is very few expected the Panthers would win more than four games this season or be as competitive as they have been.

But Bridgewater has kept them close. The next hurdle is winning.

Wide receiver Robby Anderson had eight catches for 84 yards against the Broncos, giving him a career-high 996 yards receiving on the season. Anderson has been a solid free agent pickup for general manager Marty Hurney and has proven this season he's more than just a deep threat.

Carolina's pass defense allowed Drew Lock to throw for 280 yards and four touchdowns (with no interceptions). With the front four struggling to get pressure on its own, defensive coordinator Phil Snow is having to gamble more with blitzes to cause some disruption. That has resulted in a league-high 13 fumble recoveries for Carolina, but at times has left the team's cornerbacks exposed. Ultimately the Panthers need to find some defensive linemen who can pressure the quarterback other than just Brian Burns.

Rookie linebacker/safety Jeremy Chinn continues to have an incredible season. He leads all NFL rookies in tackles and had eight tackles, including a sack-fumble on Lock that led to a 53-yard return by Efe Obada. That play set up a 3-yard touchdown run by Mike Davis giving Carolina its only lead of the game at 7-6.

Panthers veteran cornerback Rasul Douglas got beat twice on double moves by Broncos rookie wide receiver KJ Hamler for touchdowns of 37 and 49 yards. Yes, Douglas should have had safety help over the top in Cover 3 on the 49-yard score, but he still wasn't close enough to the receiver after biting on the move. Douglas had been one of the team's top success stories earlier this season, but now finds himself struggling to keep a spot on the field. Donte Jackson and Troy Pride started at cornerback against the Broncos.

Rhule said it's too early in the week to know if McCaffrey or Moore will play Saturday night at Green Bay.

0 — Number of playoff games the Panthers have won since reaching Super Bowl 50 in the 2015 season.

Rhule said he will continue to play his starters the rest of the way, saying that he thinks using the final three games “as a tryout” would send the wrong message to his players.