Rhule: Panthers will 'look at everything' at quarterback 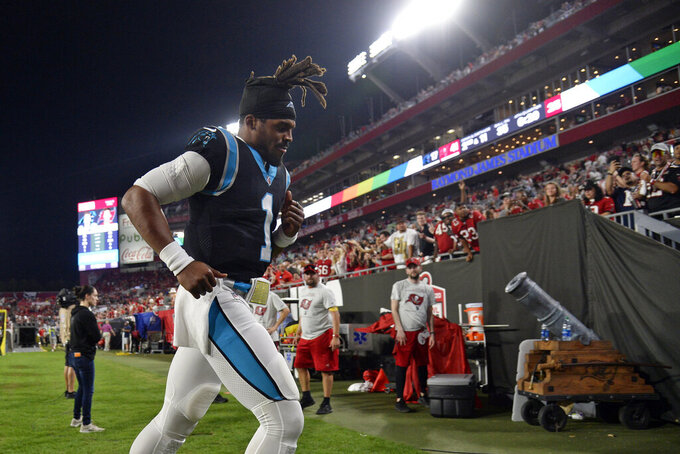 Such as how to fix the quarterback situation, hiring the right offensive coordinator, and upgrading a porous offensive line.

The Panthers are 10-23 in two seasons under Rhule and the team's offense has been among the worst in the league. Rhule struck out last season with Teddy Bridgewater, while Sam Darnold and the return of Cam Newton failed to get the team any success this year as Carolina lost its last seven games — prompting “Fire Rhule” chants at the team's home finale on Dec. 26.

Rhule said the Panthers “will look at everything” when it comes to finding a quarterback who can take them to the next level.

“We recognize that we have to improve the overall quarterback play here,” Rhule said. “We have started four quarterbacks in two years and that's not a recipe for success. If you look at the teams in the playoffs, they have consistency at quarterback."

Carolina enters the offseason with Darnold under contract for $18.8 million and Newton set to become an unrestricted free agent.

Rhule said Monday he'd love to have Newton on his team “forever” if he could, because of the leadership he brings to the locker room. And general manager Scott Fitterer praised Newton, saying he’s “never been more impressed with a player” after meeting him.

But while Fitterer said the Panthers are open to re-signing Newton, it’s unclear if the 2015 league MVP would consider a return to Carolina after enduring the embarrassment of being benched in the final two games following going 0-5 as the team's starter.

“At this point forward, I’m not coming back for no 5-12. I can tell you that now,” said Newton, referring to the Panthers’ disappointing record.

Newton, who turns 33 in May, said he doesn’t regret returning to Carolina, saying it served as “closure” for him. When asked if he would consider re-signing, Newton said he didn’t want to “jump the gun” so soon after the season.

Newton mentioned he would be open to joining a playoff contender as a backup, providing it is the right fit.

“I don’t necessarily need to play, and if it’s about winning, yeah, I can do that,” Newton said.

As for Darnold, Fitterer said the ex-Jets signal caller would be back next season despite throwing 13 interceptions and nine touchdown passes.

“The story is not written on Sam,” Fitterer said. “He is still developing.”

Fitterer said the Panthers can help the quarterbacks by upgrading the offensive line, which will be the team's No. 1 priority this offseason, along with adding to the defensive line.

Rhule's return won't sit well with some angry fans, but Panthers cornerback Donte Jackson called him a “tremendous leader of men” and said he has the support of the locker room.

Christian McCaffrey said sometimes it takes patience to reach your goals. He quoted AC/DC by saying “it's a long way to the top if you wanna rock-n-roll” and that sometimes you have to endure “people throwing tomatoes at you" along the way.

“As a GM, I’ll take any call,” Fitterer said. "It doesn’t mean we’re shopping you. ... If someone calls and offers something crazy, yeah, you would look at it. But I have no intention of trading Christian McCaffrey.”

Rhule’s first task will be finding an offensive coordinator to replace Joe Brady, who was fired midseason. Ideally he wants someone with NFL play-calling experience, but said the individual doesn't necessarily need to have head coaching experience, as some outlets have reported.

Jay Gruden, Bill O’Brien and Pep Hamilton have been reported as potential candidates.

The Panthers are about $28 million under the salary cap.

The Panthers have the sixth overall pick in the NFL draft, the highest they've selected since taking Newton first overall in 2011.

Fitterer said the team is interested in getting a long-term deal done with D.J. Moore, calling the wide receiver a “foundational piece” of the franchise. Moore, a three-time 1,000-yard receiver, has one year left on his contract.

The Panthers have a solid nucleus returning on defense with end Brian Burns, tackle Derrick Brown, linebacker Shaq Thompson, cornerback Jaycee Horn and safety Jeremy Chinn under contract. The big issue will be fixing an offense that struggled tremendously throughout the season.

“We know what our issues are,” Rhule said. “We have the 30th-ranked offense and the second-ranked defense.”