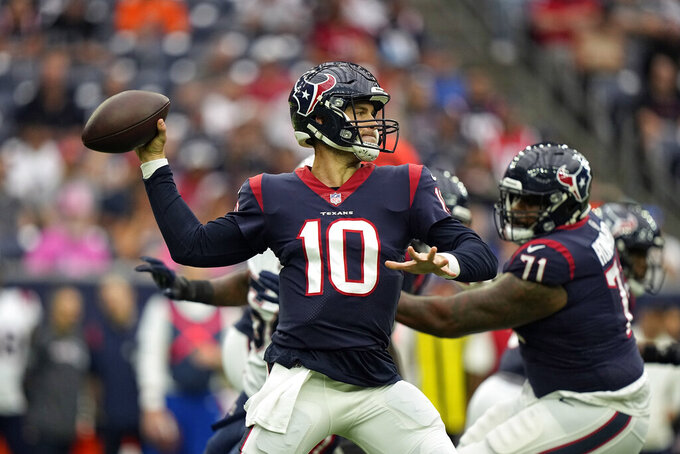 HOUSTON (AP) — Houston’s Davis Mills took a huge step forward with his performance this weekend against the New England Patriots.

Now the Texans are looking for the rookie quarterback to translate that progress into a win.

“He just did what our game plan was,” coach David Culley said. “Once he got comfortable, he got really comfortable, and then we got in a good flow offensively, and he executed our offense perfectly with the first three drives.”

But a second half filled with mistakes, penalties and inconsistent play doomed the Texans in a 25-22 loss.

The Texans led 22-9 in the third quarter after a third TD pass by Mills. Houston was held scoreless after that as the Patriots used a last-minute field goal to get the win and send the Texans to their fourth consecutive loss.

Although the Texans played well in the first half, Culley was disappointed that they didn’t take better advantage of their scoring opportunities in the first two quarters. He pointed to a series late in the second quarter where they had a first down from the New England 2.

Offensive tackle Tytus Howard was called for a false start on the next play to push the Texans back. Mills was then sacked on two of the next three plays and Houston settled for a field goal.

“That should’ve been seven points for us, which would end up putting the game in a whole different light for everybody, how they played us and how we played,” Culley said.

The Texans need Mills to continue making progress with Tyrod Taylor out indefinitely with a hamstring injury. He’s eligible to come off injured reserve this week, but Culley said he doesn’t think he’s ready to return yet.

“The big thing is just learning from mistakes and not making the same mistake twice,” Mills said. “I felt like protecting the football was my biggest role, biggest job. I thought we did pretty well with that (Sunday).”

Mills got the offense going in his third start since Taylor was injured after the Texans had managed just nine points combined in the previous two games. Culley thought the rookie’s decision-making was better on Sunday and he was impressed with some long throws Mills made after failing to make many big plays in his first two starts.

Culley was particularly impressed with a 67-yard TD touchdown pass Mills threw to Chris Moore in tight coverage in the second quarter.

“If there were any hesitation at all with him, he wouldn’t have made that throw because he would have been thinking about an interception,” Culley said.

Houston had a terrible special teams performance Sunday. They missed two extra points and a field goal. But the worst special teams miscue came when Cameron Johnston’s punt bounced off the back of teammate Terrence Brooks for zero yards, giving the Patriots the ball at the Houston 36. New England took advantage of the mistake when Nick Folk made a 52-yard field goal that cut the lead to 22-12.

Moore, who was promoted from the practice squad Saturday, had five catches and led the team with a career-high 109 yards and a touchdown Sunday. It was the first time the six-year veteran had caught a pass since 2019 with Baltimore. He spent five years with the Ravens before signing with the Texans this season. He appeared in three games last season, but didn’t have a reception.

K Ka’imi Fairbairn, who made his debut last week after opening the season on injured reserve, missed his first two extra points Sunday before missing a 56-yard field goal early in the fourth quarter.

LT Laremy Tunsil injured one of his thumbs Sunday. He was undergoing tests Monday and Culley said he’d know more about his status later in the week. ... Culley said WR Danny Amendola should play this week after missing three games with a thigh injury.

0 — Mills had zero turnovers Sunday after having five combined in the past three games.

The Texans return to AFC South play this week when they visit the Colts. Culley was asked if he thinks the team will have to be perfect Sunday to end its skid.