Ryan endures one of his least productive games with Falcons 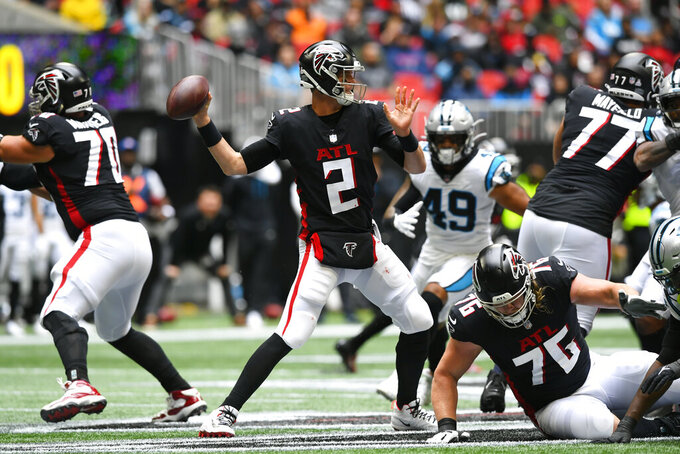 Atlanta Falcons quarterback Matt Ryan (2) works in the pocket against the Carolina Panthers during the first half of an NFL football game, Sunday, Oct. 31, 2021, in Atlanta. (AP Photo/John Amis)

ATLANTA (AP) — Matt Ryan had an afternoon to forget Sunday at Mercedes-Benz Stadium.

The 14th-year veteran endured one of his worst days as Atlanta’s quarterback, getting his hand stepped on in the second quarter, throwing for 146 yards on 20 of 27 passing and finishing with a 67.8 passer rating. He had two interceptions in a 19-13 loss to the Carolina Panthers.

“I’ve been through worse, unfortunately,” Ryan said. “It was a low-possession game. They did a good job on the offensive side of the ball for Carolina running the football, kind of shrinking the clock. When you’re going into it and that’s the case, you have to be opportunistic and you can’t worry about what the stats are. You have to find a way to get it done when we needed to, but we certainly were in that football game all the way through it.”

Carolina defensive end Morgan Fox stepped on Ryan’s left, non-throwing hand, causing blood to ooze out and him to wear a black glove the rest of he way after it was bandaged. Ryan said it had no bearing on his performance.

Falcons coach Arthur Smith, whose team snapped a two-game winning streak and dropped to 3-4, defended Ryan when asked why the intermediate and deep passing game was clogged up most of the day.

“Did you see last week? It happened this week, too. We tried to press the ball on them. You’ve got to give them credit,” Smith said. “There’s also something called a pass rush that speeds it up. That’s another false narrative. We tried to go right at them. Give them credit. They executed.”

Ryan was at a disadvantage from the coin flip with the team’s best receiver, Calvin Ridley, out for the game with mental health issues. And it hardly helped that Russell Gage, the team’s No. 2 wideout, was not targeted.

Without Ridley and with Gage a nonfactor, the Panthers were able to zero in on rookie tight end Kyle Pitts, who was coming off back-to-back 100-yard games. He was held to two catches on six targets for 13 yards. Pitts, shadowed much of the afternoon by standout cornerback Stephon Gilmore, dropped a pass on the left sideline early in the fourth quarter that would’ve given the Falcons a first down deep in the red zone.

Younghoe Koo missed a 45-yard goal on the next snap that would’ve given Atlanta a 13-12 lead.

“I thought (Pitts) competed really hard,” Ryan said. “That’s one of the best defensive players in the game, has been a defensive player of the year, so it’s a great learning opportunity for Kyle moving forward. I think he’ll be better going against guys like that, so you can learn how to become the best version of himself.”

Ryan, the 2016 NFL MVP and a four-time Pro Bowl selection, is hardly giving up on the season. Atlanta has 10 games remaining but failed to move above .500 for the first time since the end of 2017, the last time it made the playoffs.

“I tell our young guys all the time, you are a week away from being humbled in this league,” Ryan said. “There are good players across the board, and some days are like that.

“You have to have the mental strength to come back tomorrow to get back to work, be honest with what we did well, what we didn’t do well, and make sure that we’re better than what we were today moving forward. Because we’re going to see good football teams and good defenses as we go through the months of November, December, and January.”