Saints working 500 miles from home after displaced by Ida 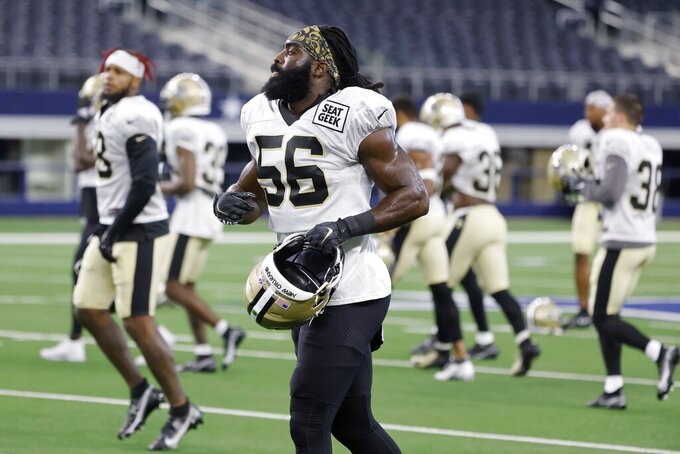 New Orleans Saints linebacker Demario Davis (56) participates in the team's NFL football workout at AT&T Stadium in Arlington, Texas, Monday, Aug. 30, 2021. Displaced by Hurricane Ida, the Saints went back to work Monday about 500 miles away in the home of another NFL team. (AP Photo/Michael Ainsworth)

ARLINGTON, Texas (AP) — Displaced by Hurricane Ida, the New Orleans Saints went back to work Monday about 500 miles away in the stadium of another NFL team.

Coach Sean Payton stood on the star logo in the middle of the home field of the Dallas Cowboys as the Saints stretched out for their first practice since before the powerful Category 4 hurricane made landfall just south of New Orleans. They will practice at AT&T Stadium through Wednesday before a previously planned break leading into the start of the regular season.

“Then we’re going through a ton of contingency plans,” Payton said.

Saints players and staff, along with about 120 family members, relocated to North Texas on Saturday, when their final preseason game was canceled a day before the destructive hurricane made landfall south of New Orleans with winds of 150 mph, and left that entire area without power.

“Left behind are obviously apartments, condominiums, homes. Those are all physical things. Nonetheless, they're still home for so many people,” Payton said on a conference call before practice. “I think to some degree that going out and being able to practice today is going to be good for everyone, because from afar, there’s only so much you can do.”

After the break at the end of this week, part of the number of days off required by the CBA, the Saints are scheduled to resume practice next Monday.

Payton said that it would be unrealistic to believe that would be at their headquarters in Metairie, Louisiana, even though initial reports from people there indicated that the facility handled the storm overall pretty well.

"There’ll be important time for everyone to kind of assess where they’re at. And there’s a good chance when we start up (next) Monday ... that’s going to be somewhere other than Metairie,” he said.

There has been no word yet about the scheduled Sept. 12 season opener at home against the Green Bay Packers that is supposed to be at the Superdome.

“Obviously we’ll have a plan B. And, you know, there are a lot of other things probably from a priority standpoint that are more important for our city,” Payton said. “But that all being said, you know, we fully anticipate starting the regular season with Green Bay and then the question would be where that game’s at.”

The office of Louisiana Gov. John Bel Edwards has described damage to the area's power grid appeared “catastrophic,” and officials warned it could be weeks before power is fully restored.

Saints owner Gayle Benson said she is making an initial $1 million donation toward the Gulf Coast Renewal Fund. The team added “those wishing to donate can do so by going to NewOrleansSaints.com/hurricaneida. We will continue to be in close communication with governmental and community leaders to determine where aid and assistance can most effectively be directed. More details on the fund and other initiatives will be provided in the coming days.”

Because of not playing last Saturday, the Saints got in only two preseason games, taking away an opportunity for some players trying to make the final roster to get more evaluation. There was another practice scheduled Tuesday, the same day the roster has to be reduced to 53 players.

While glad to have the players and their families safe, Payton doesn’t like the environment relative to having to cut some players.

“With all the families here, I think that’s challenging. I brought it up this morning. And we talked about it as a team and I just said hey, we just have to understand that there’s a lot of good about us being here,” Payton said. “But there are challenges when it comes to your jobs that are on the line, and we’re going to do our best to take care of everyone."

The arrival of Ida came 16 years to the day after Katrina devastated New Orleans. The Saints were forced to move for the entire 2005 season, setting up operations in San Antonio while playing home games there and in Baton Rouge at LSU. New Orleans also played one "home" game at Giants Stadium.

That was before the current regime led by Payton joined the franchise fresh off three seasons as assistant head coach and quarterbacks coach for the Cowboys. The Saints went 3-13 in 2005, but spurred on by the quick restoration of the Louisiana Superdome, they went 10-6 and won the NFC South the next year.

In 2012, the Saints evacuated to Cincinnati when Hurricane Isaac, a less powerful storm, approached New Orleans. That storm made landfall with winds of about 80 mph.

“We were there for a couple of days and came back. Our area had not been truly affected, so we were back to normal,” said six-time Pro Bowl defensive end Cameron Jordan, a second-year Saints player then who is still with the team. "Now, we wake up this morning and it’s a lot more damage than there was in 2012 for sure ... From 2012 to now, it’s completely different.”

After seeing pictures of his house, Jordan said it will need some immediate attention, including a new roof. He said all that matters is his family is with him and safe.

Veteran linebacker Demario Davis said his wife, who is due with another child in October, and four young kids are with him in Texas.

“My kids think they are on vacation right now. They don’t know, they’re so young. So they’re seeing a lot of their friends. And so they just run around and play,” Davis said. “They’re not at the age where they can fully grasp what a natural disaster is just yet.”