Steelers rookie Highsmith not focused on being "Bud Light" 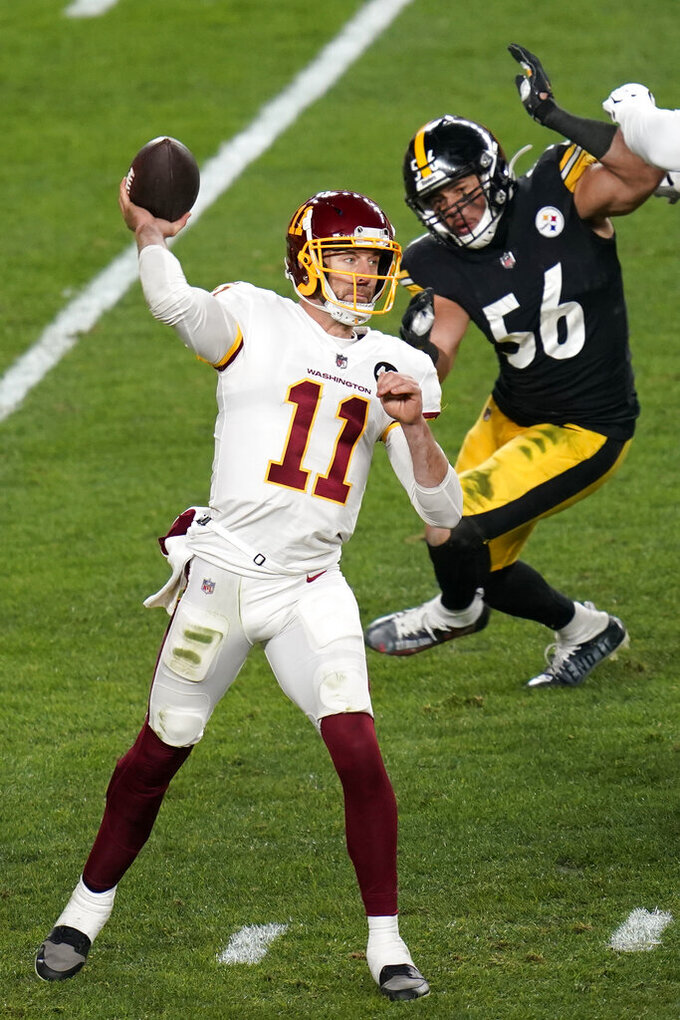 Washington Football Team quarterback Alex Smith (11) gets off a pass under pressure from Pittsburgh Steelers linebacker Alex Highsmith (56) during the first half of an NFL football game, Monday, Dec. 7, 2020, in Pittsburgh. (AP Photo/Keith Srakocic)

PITTSBURGH (AP) — Alex Highsmith is not trying to imitate Bud Dupree. There's no point. The rookie Pittsburgh Steelers linebacker understands he doesn't have Dupree's mixture of experience, size and physicality.

Yet Highsmith also knows he doesn't have to be “Bud Light" to be effective for the Steelers (11-1), who will try to bounce back from their first loss of the season on Sunday night in Buffalo.

As long as Highsmith can keep opponents from focusing too much attention on T.J. Watt — whose 12 sacks lead the NFL — on the other side of the defensive front, Highsmith figures he's doing his job.

“Just coming in, doing whatever they’re asking me to do,” Highsmith said Thursday. "Now I have to step up into a bigger role. ... I’m just taking the same mindset that I have when I wasn’t playing as much as I am right now.”

It's one of the reasons the Steelers jumped at the opportunity to take Highsmith in the third round of the draft. Highsmith played defensive end at Charlotte, but Pittsburgh general manager Kevin Colbert and coach Mike Tomlin saw something in the way the 23-year-old went about his business that made them believe he could make the transition to outside linebacker.

They just might not have envisioned Highsmith having to make it so quickly. Yet the Steelers were left with little choice when Dupree — playing under a one-year franchise tender and likely to become a free agent next spring — tore the ACL in his right knee late in a victory over Baltimore on Dec. 2. Highsmith showed flashes in limited snaps early in the season, including a game-changing interception of Lamar Jackson against the Ravens on Nov. 1 that set the stage for a second-half comeback win.

There's a difference, a huge difference, between playing 15-20 snaps a game and nearly three times that. While Highsmith didn't exactly make a flashy impression in his first NFL start on Monday against Washington, finishing with five tackles on a season-high 60 snaps, he didn't embarrass himself either.

“I’ve never worried about Alex because, like I said last week, you tell him one time and he’s got it,” defensive coordinator Keith Butler said.

“You don’t have to worry about him making mental mistakes or missed tackles. Maybe more so just being an outside linebacker in this league makes it tougher in terms of taking on people and trying to lead tackles and stuff like that (but) he did a good job for us.”

Butler has given Highsmith the freedom to figure things out as he goes along. That means turning each snap into a battle of wits between Highsmith and opposing offensive tackles as he toggles back and forth between standing up or getting down into a three-point stance, as he did in college. If anything, getting more playing time gives Highsmith more opportunities to experiment.

“It’s easier to set up rushes, the more rushes that you have,” he said. "Really it’s a chess match.”

One that will be particularly difficult against Bills quarterback Josh Allen. While not quite as dangerous as Jackson in the open field, Allen presents his own set of problems because he's an even more accomplished passer, capable of staying in the pocket and throwing the ball down the field or making things up on the fly when forced to scramble.

Pittsburgh, whose streak of 69 straight games with at least one sack is tied for the NFL record originally set by Tampa Bay between 1999-2003, making Allen uncomfortable is a priority if it wants to leave Buffalo with the franchise's first playoff berth in three years.

“It’s going to start with getting to him and rushing the passer,” Highsmith said. “That’s really what it’s all going to be about.”

Allen's numbers were relatively pedestrian last December when he came to Pittsburgh and g uided the Bills to a 17-10 win. He threw for a touchdown and ran for another, but accounted for just 167 total yards. Allen has taken a significant step forward this season, look no further than his 375 yards passing, four-touchdown performance on Monday night against San Francisco as proof.

Highsmith hopes he will be too. He's still searching for his first NFL sack after getting 15 in his senior year at Charlotte. He's not worried about it. At this point, he knows they'll come if he just goes out there and does his job.

“The next-man up mentality is something that has always been (important here),” he said. “I just know I’m filling in right now and I want to be (successful).”