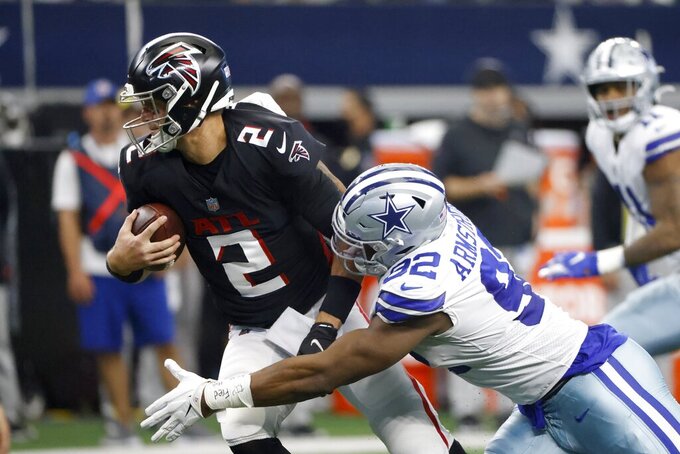 BETTING LINE: Patriots by 7, according to FanDuel SportsBook.

TURNOVER DIFFERENTIAL: Patriots plus-3; Falcons minus-5

PATRIOTS PLAYER TO WATCH: LB Matt Judon has led New England’s’ pass rush this season, getting a team-high 9 1/2 sacks. No other Patriots defender has more than three.

FALCONS PLAYER TO WATCH: QB Matt Ryan is coming off the lowest-rated game (21.4) of his career. He completed just 9 of 21 passes for 117 yards and two interceptions in the ugly loss to Dallas.

KEY MATCHUP: Falcons wideouts vs. Patriots secondary. Atlanta's receiving corps is a mess after trading Julio Jones and losing Calvin Ridley, who will miss his fourth straight game to deal with mental health issues. The wideouts accounted for just 36 yards on four catches vs. the Cowboys, and now they're facing one of the NFL's highest-rated pass defenses. Atlanta must generate more downfield plays to take the heat off TE Kyle Pitts and the running game.

KEY INJURIES: The Patriots placed pass rushing LB Josh Uche on injured reserve with an ankle issue, meaning he will miss at least three games. DL Chase Winovich was activated from the IR, after being sidelined since Oct. 19 with a hamstring injury. RBs Damien Harris and PR/KR Gunner Olszewski began the week in the concussion protocol after being sidelined against Cleveland, but neither was on the final injury report. The Falcons' biggest concern was RB Cordarrelle Patterson, who has been slowed by an ankle injury and will be a game-time decision. He has been one of Atlanta's most dynamic players in almost every facet of the offense, so it would be a huge blow if he can't go. The Falcons will definitely be without TE Hayden Hurst (ankle) and CB Kendall Sheffield (hamstring).

SERIES NOTES: New England has won the past six meetings with Atlanta, including a 34-28 overtime victory in the 2017 Super Bowl when Tom Brady and the Patriots overcame a 28-3 deficit late in the third quarter. ... Atlanta’s most recent home victory over New England was a 30-17 win in 1995.

STATS AND STUFF: The Patriots have won four straight games and five of their past six after a 1-3 start. ... With a victory, New England coach Bill Belichick would take sole possession of third place on the regular-season career win list with one team. He is tied at 250 wins with former Dallas coach Tom Landry, trailing George Halas (318 with Chicago) and Don Shula (257 with Miami). … The Patriots are one of two teams, along with Tampa Bay, to score at least 45 points in multiple games. … Rookie QB Mac Jones has completed at least 70% of his passes in six of his first 10 games, the only rookie quarterback to do so. The rookie record is nine such games by Dallas’ Dak Prescott. ... The Patriots have scored in the first half in 96 consecutive games (regular season and playoffs), an NFL record. … The Patriots are tied with Dallas for second in the NFL with 14 interceptions, one behind Buffalo. ... The Falcons fell behind 36-3 against the Cowboys, the second-largest halftime deficit in franchise history. The largest was a 35-0 deficit to Johnny Unitas and the Baltimore Colts in 1967, the franchise's second year in the NFL. ... The 40-point loss was Atlanta's worst since a 56-10 rout by the Kansas City Chiefs in 2004. ... Atlanta has lost five straight games at Mercedes-Benz Stadium, including an 0-3 mark this year. Since moving into the retractable-roof stadium in 2017, Atlanta is just 14-21 at home. ... The Falcons will try to get to .500 for the third time this season. They have not been above .500 since the end of the 2017 season. ... K Younghoe Koo has made 15 of 16 field goals and all 17 PATs. ... The Falcons have won six of their past seven prime-time games in Atlanta. ... Pitts has a team-high 606 yards receiving, second most through the first nine games of a season by a rookie tight end in NFL history. ... In his first two games against the AFC East opponents, Pitts had 16 receptions for 282 yards and one TD.

FANTASY TIPS: Patriots tight end Hunter Henry had a season-high two touchdown receptions last week and leads all tight ends with seven TD receptions this season. He has a touchdown catch in each of his previous three Thursday night games. ... Given Patterson's health and Mike Davis' ineffectiveness, Falcons RB Wayne Gallman might be worth a shot. He played extensively last Sunday and had the team's longest running and receiving play.