Surging Vikings get yet another stellar show from Jefferson 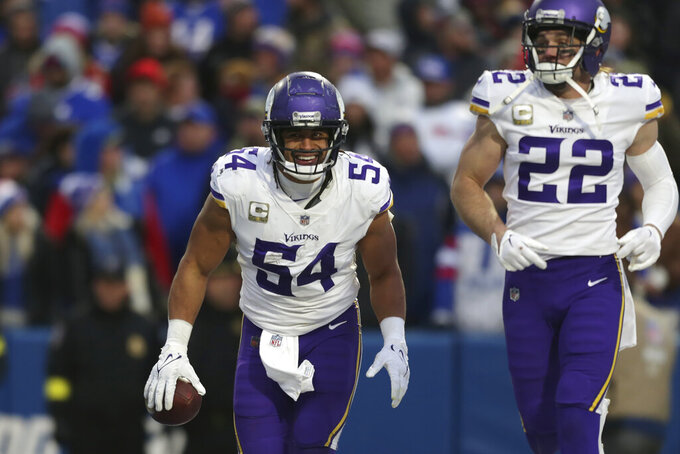 Minnesota Vikings linebacker Eric Kendricks (54) celebrates with safety Harrison Smith (22) after recovering a fumble in the end zone for a touchdown in the second half of an NFL football game against the Buffalo Bills, Sunday, Nov. 13, 2022, in Orchard Park, N.Y. (AP Photo/Joshua Bessex)

MINNEAPOLIS (AP) — The Minnesota Vikings have leaned on their late-game resilience on a weekly basis this season, a trait that's as vital as ever in a league staging a record amount of close contests.

Winning seven straight games, all by one score, wouldn't be possible without the intangible asset of crunch-time confidence. This streak that has propelled the Vikings (8-1) into a runaway lead of the NFC North also owes as much to their possession of one of the NFL's true elite pass-catchers.

“He truly believes that he is capable of greatness every time he goes on the field,” coach Kevin O'Connell said, “and I happen to agree with him.”

With 193 receiving yards and a first-quarter touchdown that aided the Vikings in their exhilarating 33-30 overtime victory at Buffalo on Sunday, Jefferson was again the star of a show that featured all kinds of stellar performances.

There was no play more fitting of his impact on the game than the unfathomable one-handed grab he made on fourth-and-18 to keep them alive with a four-point deficit late in the fourth quarter. O'Connell's mantra of pushing his team to be at its best when its best is required has no better pitchman than Jefferson, who's only 2½ seasons into his stellar career.

“Big-time players making big-time plays,” said cornerback Patrick Peterson, who had two interceptions of Josh Allen in the end zone, including the game-ending pick in overtime.

The Vikings have a long way to go in a lot of areas. They also have a lot of success to build on.

“Keep fighting all the way to the end,” Jefferson said. "I just feel like this team is so together as one.”

The often-overlooked art of blocking beyond the five offensive linemen was superb.

Dalvin Cook knocked defensive end Von Miller off his pass-rushing path with a jarring blow to help Cousins complete the fourth-and-18 throw to Jefferson. On Cook's 81-yard touchdown run in the third quarter that sparked the rally, Jefferson stonewalled then flattened safety Damar Hamlin to create a big seam. Tight end T.J. Hockenson also hustled downfield to cut off cornerback Cam Lewis help spring Jefferson for the last part of his 46-yard gain on third-and-11 in the first quarter.

The Vikings are sixth in the NFL in interception rate and 11th in sacks per pass attempt, two vital measurements of pass defense, and they've faced five of the top 10 teams in passing yardage. Still, they're allowing an average of 7.35 yards per pass play for the fourth-worst rate in the league.

Both the offense and the defense had an out-of-nowhere boost from a deep reserve.

Blake Brandel filled in at LT after Christian Darrisaw left with a head injury in the third quarter. Drafted in the sixth round in 2020, Brandel had played only one snap on offense this year until Sunday. Duke Shelley, who was promoted from the practice squad prior to the game, was an overtime sub at CB who broke up a pass in the end zone for Dawson Knox to deny what would've been the game-winning touchdown. Shelley spent the past three seasons with Chicago.

Greg Joseph has four missed extra points, the most in the NFL. He made both of his field-goal attempts in Buffalo, including the 33-yard try in overtime that provided the winning margin, but he's also tied for the most missed field goals (five) in the league this season. That's a total of 19 points for a team that has played seven straight one-score games.

Darrisaw and CB Akayleb Evans are both in the concussion protocol, and O'Connell declined to speculate about their availability. Evans started in place of Cameron Dantzler, who went on injured reserve with an ankle injury and must miss at least three more games. Andrew Booth Jr. replaced Evans, was picked on by Allen and benched for Shelley for the final three plays. DE Dalvin Tomlinson missed his second straight game with a calf injury.

9 — All but one of Jefferson's 10 receptions came with a sub-50% completion probability, according to the NFL's Next Gen Stats. No other player has had more than six in one game since the data was tracked starting in 2016.

The Vikings get five of their next six games at home, starting with Dallas this week. The Cowboys (6-3) are coming off an overtime loss at Green Bay in which they blew a 14-point lead early in the fourth quarter. The Vikings need only four more victories to clinch the division, or fewer than that when coupled with the correct amount of losses by the Packers (4-6), Lions (3-6) and Bears (3-7).