In the trenches: Chargers may focus on lines in early rounds 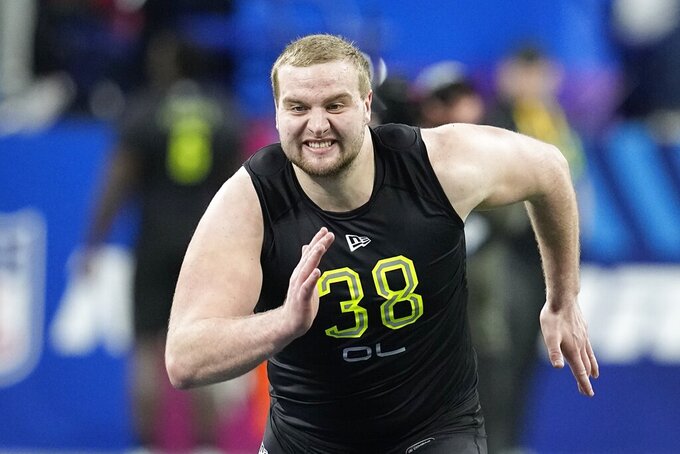 The Los Angeles Chargers found their franchise left tackle in the first round of last year’s NFL draft. It wouldn’t be a surprise if they addressed the right side of the offensive line this time.

Even though general manager Tom Telesco made considerable upgrades to the line last year — including the selection of Rashawn Slater with the 13th overall pick — the Bolts still have question marks at right tackle and right guard. The Chargers released oft-injured right tackle Bryan Bulaga before the start of free agency, and right guard Oday Aboushi played in only six games before suffering a season-ending knee injury.

“I think we’re in a much better spot than a year ago. We’re in a good position, but we’re definitely looking to strengthen that because we want to be a line of scrimmage team,” coach Brandon Staley said during the league meetings.

The Chargers could land an offensive tackle with the 17th pick in the first round. Mississippi State’s Charles Cross is likely to be off the board when Los Angeles is on the clock, but Northern Iowa’s Trevor Penning could still be there. Many scouts consider Penning the top run blocker in this year’s class.

If both Cross and Penning are gone, the focus could shift to the defensive line, where quality depth remains an issue.

Former Tampa Bay general manager Mark Dominik, now a draft analyst and host for SiriusXM, said focusing on the offensive and defensive lines is logical in the early rounds.

“I think offensive line makes a ton of sense because there’s not a tight end in the first round,” he said. “If they don’t go offensive line, I think they’re gonna put a little bit more probably stock in the defensive interior and take advantage of some of the big boys on the board. So they’re looking at the trenches in my mind. It would make a lot of sense there.”

General manager Tom Telesco had a successful free agency period by re-signing wide receiver Mike Williams, acquiring linebacker Khalil Mack from the Chicago Bears and signing cornerback J.C. Jackson. Still, he needs to continue that momentum in the draft. Under Telesco, the Chargers have made the postseason twice and posted a winning record only four times since his being hired in 2013.

Telesco hit on Slater last year and quarterback Justin Herbert in 2020, but his selections after the first round have been average at best. Safety Derwin James, the 17th overall pick in 2018, is the only remaining player on the roster from that draft, and the 2019 class has failed to produce a breakthrough starter.

The Chargers have selected a running back on the third day the last two years, but Joshua Kelley and Larry Rountree haven’t been able to emerge as a second option to share carries with Austin Ekeler. They could re-sign Justin Jackson, but he has been plagued by injuries for most of his four seasons.

Ekeler scored 20 touchdowns last season and averaged 4.42 yards per carry, but in four of the six games he had at least 15 carries, the average fell under 4 yards.

During his season-ending news conference, Telesco said that he was surprised with how much the Chargers struggled on defense. Staley made the Rams into the top-ranked defense in 2020, but the Chargers were 23rd in 2021. They allowed 27 points per game, which tied for third worst in the league and ranked near the bottom in run defense and third-down conversions.

Mack and Joey Bosa on the edge give the Chargers one of the top pass-rushing duos in the league, but they lack depth on the defensive line and at linebacker. Georgia defensive tackle Jordan Davis and Utah linebacker Devin Lloyd would provide help immediately if the Bolts decided to focus on defense in the first round.

The Chargers have only one pick on Friday — No. 79 in the third round — after sending a second-rounder this year and a sixth next year to Chicago for Mack.

They begin Saturday with one pick each in the fourth and fifth rounds (123, 160).