Watson set to make Browns' debut at Texans after suspension 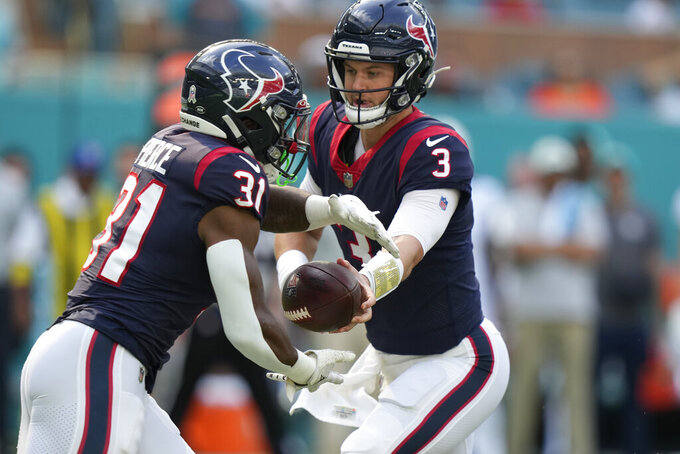 TURNOVER DIFFERENTIAL: Browns minus-7; Texans minus-4.

BROWNS PLAYER TO WATCH: All eyes will be on QB Deshaun Watson, who returns from his 11-game suspension for alleged sexual misconduct to make his Cleveland debut against his former team. Watson spent four seasons with the Texans before asking to be traded and eventually being dealt to the Browns for three first-round draft picks. It will be Watson's first regular-season game in 700 days.

TEXANS PLAYER TO WATCH: QB Kyle Allen will make his second start Sunday since Davis Mills was benched. He’ll try to bounce back after a terrible performance in his season debut where he threw two interceptions and led Houston to just 32 yards in the first half as the team fell into a 30-0 hole.

INJURIES: Browns All-Pro DE Myles Garrett was limited in practice this week while dealing with a badly sprained shoulder he sustained in a car crash in September and aggravated last week. Garrett has acknowledged he may need surgery at some point. ... Browns CB Greg Newsome (concussion) will start after missing two games. ... Browns TE David Njoku (knee) will miss his third game in five weeks. Njoku made a one-handed TD catch with 32 seconds to go in regulation last week. ... Texans CB Derek Stingley is likely to miss his third straight game with a hamstring injury. ... RB Rex Burkhead is in the concussion protocol. ... DL Maliek Collins missed practice this week with a chest injury.

SERIES NOTES: The Browns have won two straight in the series. ... Houston won the previous five in a row. ... The teams first met in Houston’s inaugural season in 2002 when the Browns got a 34-17 victory in their fourth season as an expansion team. ... The Texans have outscored Cleveland 240-201 in the series.

STATS AND STUFF: Watson's acquisition is supposed to end Cleveland's two-decade search for a franchise quarterback. The 27-year-old led the NFL with 4,823 yards passing and had 33 touchdowns in 2020. The Browns lured him — he initially declined their offer — with a fully guaranteed five-year, $230 million contract. ... Watson has the highest completion rate (67.8%) of any player with at least 1,500 attempts. ... Browns RB Nick Chubb is second in the league with 1,039 rushing yards and 12 TDs. He's averaged 84 yards and one TD against Houston. ... Chubb joined Hall of Famer Jim Brown as the only Browns backs with four straight 1,000-yard seasons. ... WR Amari Cooper has delivered in his first season, leading the Browns in yards (792) and receptions (57). ... Rookie CB Martin Emerson Jr. was credited with four pass breakups last week. He held Bucs WR Mike Evans to zero catches on seven targets. ... Cleveland's poor special teams had a rare positive last week with WR Donovan Peoples-Jones' season-best 29-yard punt return. ... Garrett had 1 1/2 sacks last week, including a critical one of Tom Brady late in the fourth quarter. ... Browns WR Anthony Schwartz scored his first career TD last week on a 31-yard reverse. ... Browns rookie K Cade York missed his sixth field-goal try last week. York, a fourth-round draft pick, has struggled with trajectory issues on long kicks. ... Cleveland is 5-0 against the AFC South since 2020. ... The Texans have lost six straight games since their only win on Oct. 9 against Jacksonville. ... RB Dare Ogunbowale had his first TD of the season last week. ... WR Brandin Cooks had five catches for 59 yards last week and had 78 yards receiving and a touchdown in his previous game against Cleveland. ... WR Nico Collins has had at least five catches in three straight games. ... TE Jordan Akins had a TD catch last week, but also lost a fumble that was returned for a score. ... DL Maliek Collins had a career-high three tackles for losses and two sacks last week. ... DL Jerry Hughes has four tackles for losses and three sacks combined in his past three home games. ... DL Mario Addison had his first sack of the season last week. ... LB Christian Kirksey had seven tackles and a sack last week. He’s had at least seven tackles in four consecutive games.

FANTASY TIP: While Watson gets up to speed following his long layoff, the Browns could lean even more on Chubb, who had a season-high 26 carries for 116 yards last week against Tampa Bay.