Win or lose, it's Darnold's job to lead Jets rest of the way 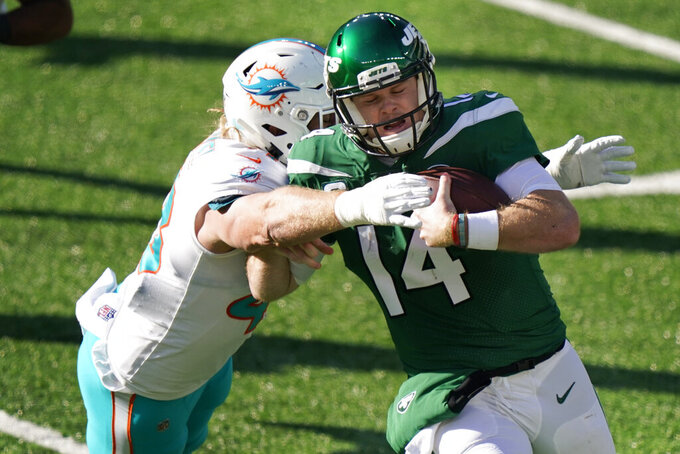 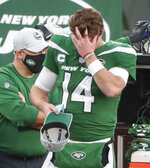 NEW YORK (AP) — Sam Darnold's return was supposed to be the big spark for the New York Jets.

The offense showed some positive signs the past two games with Joe Flacco under center. But the team was excited to have Darnold back at quarterback and playing with his three starting wide receivers for the first time.

Well, the Jets scored a mere three points in a 20-3 loss to Miami and dropped to 0-11. What's worse, Darnold and the offense looked much like the inept group that trudged through the first few months of the season.

So, for a team crawling perilously closer to 0-16, why not play Flacco if he's moving the offense and potentially putting them in better position to get that elusive first victory?

“It’s easy to point at the quarterback all the time,” coach Adam Gase said Monday. “Sam needs to play. I want him to play, I want him to be out there. I feel like it wasn’t all on him every drive. Were there some mistakes made? Yes. But it wasn’t every drive that was his fault.”

But Darnold was responsible for two drive-killing interceptions: first on the Jets' opening possession of the second half, and second late in the game with New York in desperation mode.

“I’ve just got to continue to learn and grow from it,” Darnold said of his struggles. “That’s all I can do.”

The third-year quarterback is having a brutal season that has included being sidelined twice, each time for two games, with shoulder injuries.

He has just three touchdown passes and none in his last four games, spanning 19 quarters. Darnold has also been intercepted eight times, and his 64.0 quarterback rating ranks last in the NFL among players who have started four or more games.

Despite all that, it appears there's no scenario where benching Darnold will be an option over the last five games.

“Sam is the starter, and we need Sam to play as many snaps as possible," Gase said. “We’re just going to keep working to get better every week, and I think he will. I think he’s very competitive and he wants to do well and he’s looking forward to this next game.”

The evaluation period on Darnold would seem to be over this deep into his career. The Darnold-Gase union hasn't worked, and the coach's departure after the season seems a foregone conclusion. Darnold's status remains uncertain.

If the Jets don't win a game, they'll assure themselves of the No. 1 pick in the NFL draft in April. That means Clemson quarterback Trevor Lawrence will be an option — if he declares for the draft. That likely also means New York will move on from Darnold by possibly trading him in the offseason.

For now, though, it's Darnold's job the rest of the way — win or lose.

“We don’t pull out offensive linemen because they get beat one time or two or three or five times,” Gase said. “We don’t pull out receivers when they drop the ball. Guys have got to stay in there and play. That’s football.”

The defense was solid in the second half against Miami, causing two turnovers and forcing three punts — including two on three-and-outs — before allowing a late touchdown that sealed things. The offense struggled to take advantage of either of the takeaways, coming away with no points.

“I feel bad for our defense,” right guard Greg Van Roten said. “I feel, personally, seeing them in the locker room, we let them down as an offense.”

Third-down and red-zone efficiency. It's the running theme for the season. The Jets went 3 for 13 on third downs against the Dolphins and rank last in the NFL in that category — as they have for most of the year. New York actually showed some improvement in the red zone the last two games with Flacco at quarterback, but regressed with Darnold. The Jets went 0 for 3 on scoring touchdowns inside the 20 on Sunday.

Quinnen Williams. The defensive tackle is arguably the team's most improved player in his second season. Williams, the team's first-round pick last year, had seven tackles, 1 1/2 sacks, a forced fumble and two passes defensed against Miami.

Alex Lewis. The starting left guard was a surprise inactive Sunday for what Gase said wasn't an injury-related reason. Lewis was limited at practice Friday and then Pat Elflein started in his place against Miami. Gase wouldn't divulge details, saying the team is handling the situation internally. When asked if the two had an argument, Gase said he and Lewis “had a conversation,” but wouldn’t call it “a verbal altercation.”

LB Blake Cashman is likely to miss a few weeks after injuring a hamstring. He previously missed three games with injuries to both hamstrings, but Gase said this is a new injury. The second-year linebacker also missed four games with an injured groin.

12 — The Jets already have the longest single-season losing streak in team history. Next up is the longest overall skid of 12 games, which spanned the 1995-96 seasons under Rich Kotite.

New York will try to avoid yet another dubious franchise milestone by dropping to 0-12 next Sunday when hosting the Las Vegas Raiders.