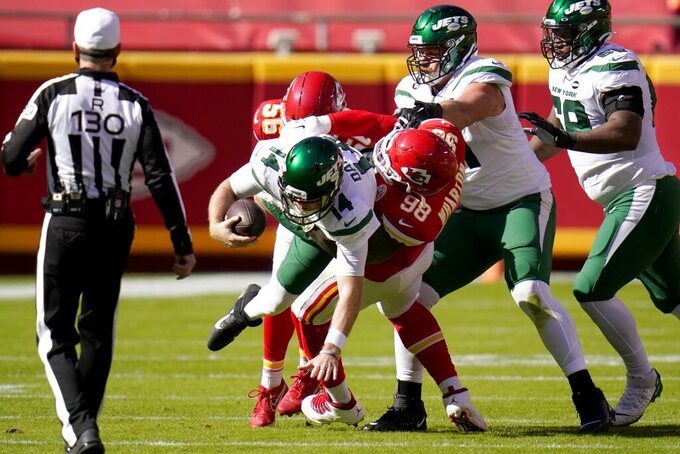 NEW YORK (AP) — The winless New York Jets are on the verge of making franchise history.

And they want nothing to do with it.

After a 35-9 beatdown in Kansas City, the Jets will look to avoid the first 0-9 start in team history. And they’ll have to do it next Monday night against the AFC East-rival New England Patriots in front of a prime-time TV audience.

“We've just got to win one,” quarterback Sam Darnold said Monday. “If we win one, who knows?”

Well, this week, it would prevent this year's squad from holding the dubious distinction of being the only team in Jets history to lose its first nine games. Under Rich Kotite in 1996, New York opened 0-8 before getting its only victory of a 1-15 season.

That is generally regarded as the worst year in team history. But this bunch might give that one a run.

“Guys are still hungry to get a win,” safety Marcus Maye insisted.

That's despite so much uncertainty surrounding the team in what quickly became a lost year.

Gase has been on the hot seat all season, with the heat as high as it possibly can get — but he remains in charge, for now.

Injuries have been a constant factor, and even Darnold is uncertain to play against the Patriots while his banged-up right shoulder is evaluated this week. There's optimism there, but the inept offense has yet to see all three of its starting wide receivers — Jamison Crowder, Breshad Perriman and Denzel Mims — on the field together.

General manager Joe Douglas has also been making moves with a clear eye on the future. He has cut running back Le'Veon Bell and traded linebackers Avery Williamson and Jordan Willis, and nose tackle Steve McLendon in the last few weeks. Douglas might not be done dealing before the NFL's trade deadline Tuesday.

All of that, plus the piling losses, might take a toll on most locker rooms. But Gase says that's one thing — and perhaps the only thing — that has remained positive throughout this tough first half of the season.

Douglas' phone. The GM has been busy the past few weeks, making deals and tweaking the roster with an eye on the future.

With the departures of Williamson, McLendon, Willis and Bell, Douglas has shown that he's collecting as many picks as he can to completely rebuild the roster for the future. That doesn't necessarily mean the current Jets are writing off this year.

“I never look at waving a white flag,” Gase said. “That’s not in my DNA. This is our profession. When things like this happen, guys aren’t ever going to be shocked by this. We’re in a profession of we’ve got to win games. When we don’t, things change and younger guys get opportunities to play.”

Second-half adjustments. For the second straight game, Gase handed over the offensive play calling to coordinator Dowell Loggains and the Jets got off to a solid start moving the ball. But, things went south in the second half — again. A week after gaining only 4 yards in the second half against Buffalo, the Jets had just 63 over the final two quarters at Kansas City.

Quinnen Williams. The defensive lineman has been solid in his second season after a ho-hum rookie year. Teams have inquired about the 2019 first-rounder, but Gase said the Jets had no interest in dealing him.

Williams, who's dealing with a hamstring injury, leads the Jets with three sacks and has been a consistent playmaker. He had two tackles for loss against the Chiefs.

“He’s at the very top of our league for an interior guy in the run and pressures and hits and tackles for losses, and he’s only going to continue to get better,” defensive coordinator Gregg Williams said. “I believe that.”

Chris Herndon. It was already a dismal season for the third-year tight end, but it was made even worse Sunday when he caught his only pass of the day for a 3-yard gain — and then fumbled it away. Herndon went from being regarded as one of the key weapons on offense to barely contributing. He has just 14 receptions for 101 yards.

Darnold was going to have an MRI and get a second medical opinion on his right shoulder as a precaution. Both Darnold and Gase sounded optimistic about the quarterback's chances of playing next Monday night. ... Perriman remains in the concussion protocol, while Crowder's injured right groin will be monitored throughout the week. ... C Connor McGovern (knee) and K Sam Ficken (right groin) could miss practice time.

2 for 12 — That's what the Jets did on third downs at Kansas City, continuing a season-long struggle in those situations. New York ranks last in the league in third-down efficiency and it's a big reason for their overall ineptitude on offense.

If there's a chance for a victory any time soon, it could be Monday night. In what has been a lopsided rivalry in recent years, the Jets could have a chance to steal one against a struggling Patriots team that has lost four in a row for the first time since 2002. It's either win or cement a place in the franchise record books.