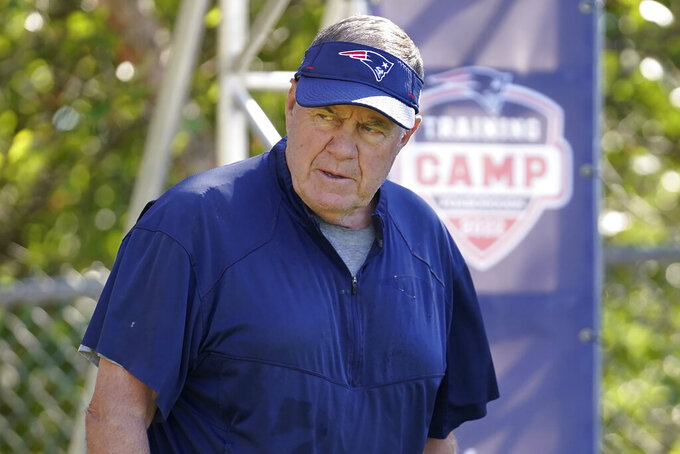 FOXBOROUGH, Mass. (AP) — One thing Mac Jones learned as a rookie is that to be a member of the New England Patriots means not living in the past.

Not the last game, the last quarter or even the last play.

He’s allowed himself to make one exception to that rule heading into his second NFL season.

In his locker there’s a black and white photo of Jones, head to the ground, as he trudged off the field during New England’s 47-17 wild-card loss to at Buffalo last season.

“I’ve always been a big fan of having motivational stuff in your locker,” he said. “I’ve always done that. That’s last year, but I think it’s motivation to just come in here and work every day.”

As Jones enters Year 2, he will be a key part of what will be a third straight year of the Patriots adjusting to major offseason changes.

Three years after Tom Brady’s departure, there are only five starters remaining from the 2018 team that won the Super Bowl. Gone, too, is former offensive coordinator Josh McDaniels to be the Las Vegas Raiders' coach.

Bill Belichick has had to adjust to it all just months removed from celebrating his 70th birthday and entering his 48th consecutive season as an NFL coach.

Following that early exit from the playoffs last season, the onus was put on improving the number of playmakers around Jones.

They did that, adding veteran DeVante Parker and speedy rookie Tyquan Thornton at receiver. Running back Ty Montgomery looks like a solid candidate to fill James White's role following his retirement. There have also been improvements at linebacker that should bolster what was an abysmal run defense in 2021.

“I think we have more playmakers,” left tackle Trent Brown said. “And what we’re doing now will allow playmakers to do what they do best.”

But with big questions lingering about who will call plays on offense after McDaniels’ departure, the Patriots may also again be fighting for a playoff spot in a tough AFC East.

Matt Patricia figures to take up the play-calling job at least initially and has experience that includes spending six seasons as the Patriots defensive coordinator and two seasons as the Detroit Lions' head coach. Still, he’s not making any predictions about how things will go.

“We follow Coach Belichick’s lead,” Patricia said. “I’m just trying to do my job to the best ability, whatever he asks me to do on any given day. And that’s the beauty of it. It’s always kind of new and exciting and challenging from that standpoint.”

For his part Jones said he thinks Patricia started to find a groove in his new role toward the end of the preseason and that the offense has grown with him.

That, in turn, has allowed Jones to progress from the mindset of a first-year player just trying to avoid mistakes, to a second-year quarterback willing to share his opinions on what he’s described as a more simplified offense.

“I think as a rookie, you’re out there just trying to do your job and play your role and kind of just do exactly what you’re supposed to do,” Jones said. “Now, with a little bit of freedom and a little bit more experience, it’s obviously good.”

Belichick is a big believer that players make the most significant improvements between their first and second years.

In Jones’ case, he said “there’s been dramatic improvement.”

“He did a great job last year but he’s starting it from a much higher point this year,” Belichick said. “His offseason work has been significant. I think everyone recognizes how well he prepares and how much further along he is than he was a year ago.”

The offensive line experienced growing pains during training camp. Brown moved back to his natural position of left tackle. The learning curve for first-round pick Cole Strange was also accelerated as he looks to fill Shaq Mason’s spot at left guard. And Mike Onwenu seems to be back on the right side full time after bouncing around last season.

Finding the right mix will be key.

“I think going through those rough patches together and not getting down on one another and just building each other up, that’s all a part of the process and being a strong team,” Brown said.

Improving the speed on defense, particularly at linebacker was a focal point this offseason.

Matt Judon, who led the team with 12 1/2 sacks in 2021, said he thinks they are playing faster than they did a year ago and will benefit from the return of Anfernee Jennings, who spent last season on injured reserve.

“That’s how we want to play,” Judon said. “We want to play a downhill mentality. We want to be aggressive. We want to attack the line of scrimmage and knock it back. So with speed and smarts you got to do everything within a defense, but when we’re moving fast and we’re executing that’s going to happen a lot.”