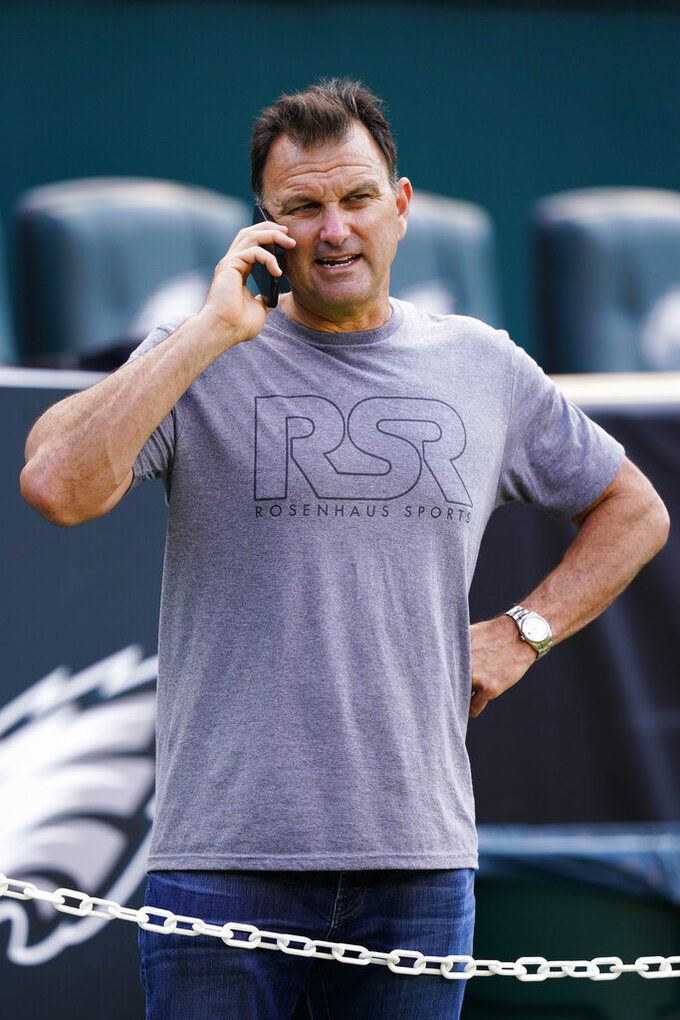 FILE - Sports agent Drew Rosenhaus talks on the phone during warmups before a preseason NFL football game between the Philadelphia Eagles and the New England Patriots on Thursday, Aug. 19, 2021, in Philadelphia. Rosenhaus was only 22 years old when he became an NFL agent. He quickly found success and is still in the game more than 30 years later. (AP Photo/Chris Szagola, File)

Drew Rosenhaus is one of the most successful NFL agents, adapting to dealing with new league executives and an ever-evolving college landscape to stay relevant after more than 30 years in the game.

In a growing industry — more than 800 agents are listed on the NFL Players Association directory — the 55-year-old Rosenhaus abides by a foundation that has made him one of the best in the business.

“The fundamentals for me are always tremendous amount of research, realistic expectations, complete transparency with my clients and fight for every cent,” Rosenhaus told the AP Pro Football Podcast. “Those are consistent in every negotiation. However, each negotiation is intricate. ... every negotiation is different.

“An unrestricted free agent is different than a contract extension for a star player like Rob Gronkowski. It’s a different negotiation than an up-and-coming young player. I negotiate every contract myself, whether it’s an undrafted free agent, a practice squad player, or the superstars that we work with."

Rosenhaus was only 22 years old when he became an NFL agent and established Rosenhaus Sports Representation in 1988. The agency has negotiated more than 1,100 contracts worth more than $8 billion just since 2004.

Because general managers have different styles and preferences, there are various challenges in negotiating with some teams as opposed to others.

“I enjoy working with someone like Bill Belichick for the simple reason that I’ve negotiated contracts with Bill for more than three decades so I know him," Rosenhaus said. "We have a working history.”

Rosenhaus knew at a young age that he wanted to become an agent. He grew up near the Miami Dolphins practice facility and his late father, Robert Rosenhaus, was friends with some of the players.

“I would sit down and eavesdrop on their conversations," Rosenhaus said. "I fell in love with the NFL and NFL players and knew that I wanted to grow up and be their friend, like my dad, and do something professionally that I could help them.”

He tutored and became close friends with future Hall of Fame wide receiver Michael Irvin during their time together at the University of Miami and that helped him earn respect among the Hurricanes. Many of the top players from Miami have become his clients.

Rosenhaus started his agency with his brother, Jason, during his second year at Duke Law School. His first client was Robert Massey, a defensive end selected in the second round of the 1989 draft. Robert Bailey, a client who was a fourth-round pick in 1991, now is a partner at the agency.

After the Dolphins acquired Hill from the Kansas City Chiefs earlier this year, Rosenhaus negotiated a deal that made him the highest-paid wide receiver in NFL history. Hill received a $130 million, four-year deal.

Rosenhaus is recognized as one of the best agents in the business. He has appeared on the cover of "Sports Illustrated", made a cameo appearance in “Jerry Maguire” and played himself in the HBO series, “Arli$$.”

But that hasn't changed his approach.

“I’ve always wanted to be the best at whatever I did,” Rosenhaus said. “The more you do this job, the more humble you become and realize how much further you have to go."

There is no room or time for complacency.

The groundbreaking ruling that went into effect last year enabling college athletes to profit from use of their name, image or likeness has increased the demand for agents and allowed them to work with younger athletes.

“The biggest change is that college players are now professional players,” Rosenhaus said. “They’re hiring agents for marketing and endorsements, and it’s really a free-for-all in college football. And for me now, we actually have signed players as young as incoming freshmen to NIL deals to represent them.

"So it’s a big change. ... and, hopefully we can guide them to be successful with life after football, whether it’s in the NFL or otherwise.”

With three children under the age of 7 at home and another son on the way, Rosenhaus has plenty to balance.

“I got my work cut out for me in and out of the office,” he said with a smile.