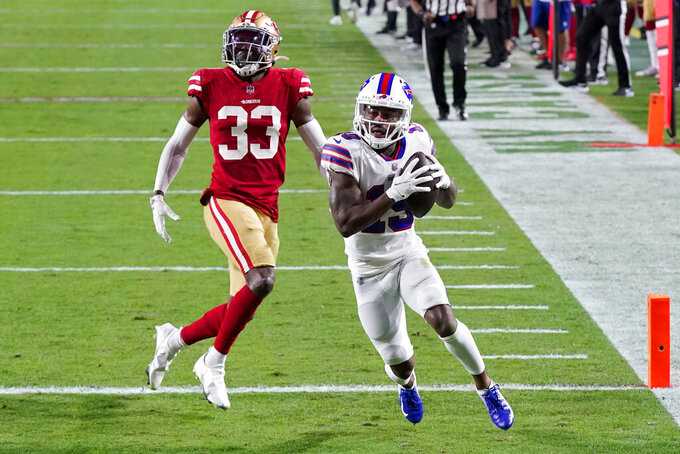 Kendrick Bourne caught a pass from Nick Mullens and celebrated an apparent touchdown that would have kept the San Francisco 49ers in the game.

The play got overturned by replay and instead of being able to move the ball the final few inches for a score, the Niners self-destructed with a false start on an attempted quarterback sneak followed by an interception.

It was that kind of night for the 49ers' offense, which couldn’t keep up with Josh Allen and the Buffalo Bills in San Francisco’s first game at its temporary new home in Arizona. That led to a 34-24 loss Monday that dealt a blow to the Niners' playoff hopes.

“We needed to play our best and I think we were very close to doing it,” coach Kyle Shanahan said. “We just had a few things that didn’t keep us out on the field. When you do that versus an offense and quarterback like that and you don’t get it back for a while, the game gets away from you.”

The Niners (5-7) were kicked out of their home in the Bay Area last week when Santa Clara County imposed new COVID-19 rules that prohibited contact sports games and practices.

The injury-riddled team packed up and relocated to Arizona with hopes of making a late-season playoff push a year after making it all the way to the Super Bowl. A few more wins would keep San Francisco in contention long enough for quarterback Jimmy Garoppolo and All-Pro tight end George Kittle to return from injuries.

The 49ers couldn’t get it done against Buffalo, although they wouldn’t use the unusual circumstances as an alibi.

“No excuses. This is the NFL,” running back Jeff Wilson Jr. said. “We all know what’s at stake. We all know what we have to do and we didn’t get it done. We are professionals.”

A defense that looked so dominant a week ago in a win against the Los Angeles Rams was picked apart by Allen. Mullens made a few too many mistakes, preventing San Francisco from moving into a three-way tie with Minnesota and Arizona for the final NFC wild card.

This game turned on a few key sequences in the second half. San Francisco was in position to make a rare defensive stop when Kentavius Street needlessly shoved Allen late for a roughing-the-passer penalty that helped set up a 23-yard TD pass to Isaiah McKenzie against a blown coverage, making it 24-10.

“It felt like they were calling the perfect plays for everything we were dialing up,” linebacker Fred Warner said. “They did a great job on their end. We were trying different looks and different calls and we just couldn’t get off the field.”

Two plays later, Mullens’ pass deflected off receiver Brandon Aiyuk’s hands for an interception by Micah Hyde that set up a field goal that made it 27-10.

Mullens responded with a TD pass to fullback Kyle Juszczyk to cut the deficit back to 10, but another blown coverage led to a 28-yard TD pass to Gabriel Davis.

Then came the sequence at the goal line that ended with Mullens’ second interception as Tre’Davious White outfought Wilson for a ball at the goal line, sealing the defeat.

Now the Niners can ill afford another slipup if they have any hopes of returning to the postseason.

“They’re all must-wins,” cornerback Richard Sherman said. “We have to go out there and find a way to get it done. Unfortunately today we didn’t get it done on the defensive side of the ball.”