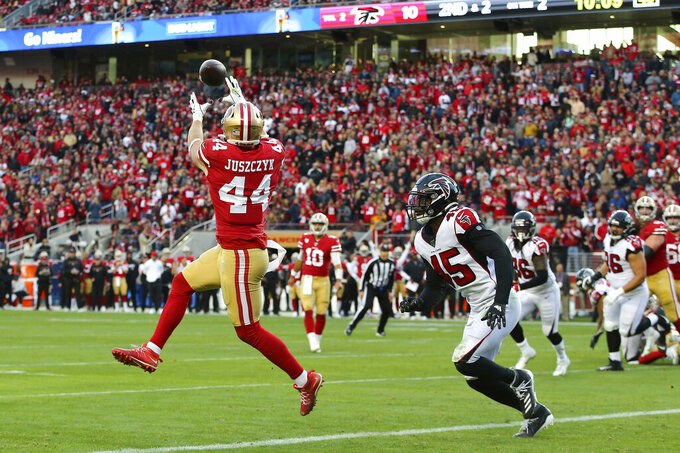 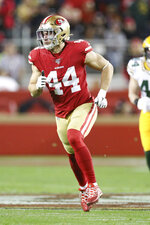 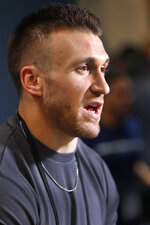 MIAMI (AP) — Kyle Juszczyk is a Harvard guy with an economics degree who can deftly navigate his way around savings, investments and finances.

On the football field, the versatile fullback majors in blocking, catching passes and carrying the ball for the San Francisco 49ers. And, the man they call “Juice” does it all at a position that some NFL squads don't even carry on their rosters these days.

“Luckily, I'm on a team that does give their fullback some love,” Juszczyk said. “So I think I'm kind of the poster child for that.”

The 6-foot-1, 235-pound bruiser is an athletic jack of all trades in Kyle Shanahan's offense, a guy who doesn't get the fanfare quarterback Jimmy Garoppolo or running backs Raheem Mostert and Tevin Coleman receive. But, no fullback in the NFL played a higher percentage of their team's offensive snaps than Juszczyk, who was on the field 40% of the time, according to NFL Next Gen Stats. Minnesota's C.J. Ham was second at 34%.

“He’s probably one of the biggest weapons on the offense," linebacker Fred Warner said. “And that’s funny to say, considering how many weapons we have.”

Consider this: With Juszczyk on the field, the 49ers average 4.88 yards per carry in the running game and 9.19 yards passing. Without him, San Francisco's numbers drop to 4.38 yards on the ground, and 7.34 in the air.

“Kyle never puts a lid on my container,’’ Juszczyk said. “He’s not scared to line me up anywhere — runs, routes, blocking any position on the defense. Really, it’s his belief in me and not limiting me to anything.’’

The 49ers use Juszczyk in the open field a lot, making him a less-traditional version of the battering ram-style fullbacks whose bone-rattling hits were once a prerequisite.

“The days of just being a sledgehammer guy that just runs his head through a brick wall, I really don’t think that’s the way to play fullback nowadays,” Juszczyk said. “I like to use angles and position blocking and use leverage to my advantage. It’s not so much just running straight downhill anymore.”

The 28-year-old Juszczyk has been selected to the Pro Bowl in each of the last four seasons, establishing himself as the NFL's premier player at the position. His statistics this season hardly show his true value: three carries for 7 yards and 20 catches for 239 yards and a touchdown.

It's everything he does — and does well — that made Shanahan jump at the chance to sign him in 2017 to a four-year, $21 million contract that included $7 million guaranteed and a signing bonus of $5 million — the largest contract for a fullback in NFL history.

“We were pumped to get Juice when we got him,” Shanahan said. “I just know me, personally, I like having a fullback because I feel like that's the only way you can dictate your terms. When you have a fullback in the game, if you really want to run the ball, you can run the ball regardless of what the defense is doing.”

Despite Shanahan's philosophy, fullbacks have been a dying breed in the league over the last decade or so, with at least one-third of teams using tight ends or offensive linemen to fill in when they need an extra blocker. So, the big contract doled out to Juszczyk had many scratching their heads at the time.

Not so much anymore.

“I don’t know why I would be upset about making the money that I do,” Juszczyk said with a smile. “That never really got to me too much, but it is nice to see that people seem to be coming around and are starting to say, OK, we’re starting to understand why Kyle brought this guy in here.”

Juszczyk's versatility was born from his Ivy League days at Harvard, where coach Tim Murphy used him in two-tight end sets with Cameron Brate, now with the Buccaneers.

During the spring of Juszczyk's sophomore season, Murphy began to see something special in the Lodi, Ohio, native.

“He said, ‘Juice, if you continue to improve the way you are and just keep grinding, you have a legitimate shot to make it to the NFL,'” Juszczyk recalled. “So, I think hearing that from somebody I respected so much and had such a great eye for talent really validated what I had thought in my own head and drove me to that next level.”

Murphy was right. And, so was Juszczyk.

He was a fourth-round draft pick of Baltimore in 2013, becoming the 10th Harvard player ever selected. Juszczyk spent four seasons with the Ravens, going from special teams to starting fullback.

Now, with all his success in San Francisco, Juszczyk could very well jump-start a rebirth of the fullback in NFL offenses.

“I think where I get the most pride is I’ve shown value enough for teams to keep me around, where other teams have completely ditched the position,” Juszczyk said. “I’m hopeful it starts to come back around where more teams see what I’m doing, they see what other fullbacks in the league are doing. I mean, some of the top offenses in the league - ourselves, Baltimore, Kansas City, Green Bay, Minnesota - all these teams play a fullback and they use them pretty regularly.

"Hopefully you start to see more teams do the same.”