At 6-3, Brady-led Bucs off to best start in nearly 2 decades 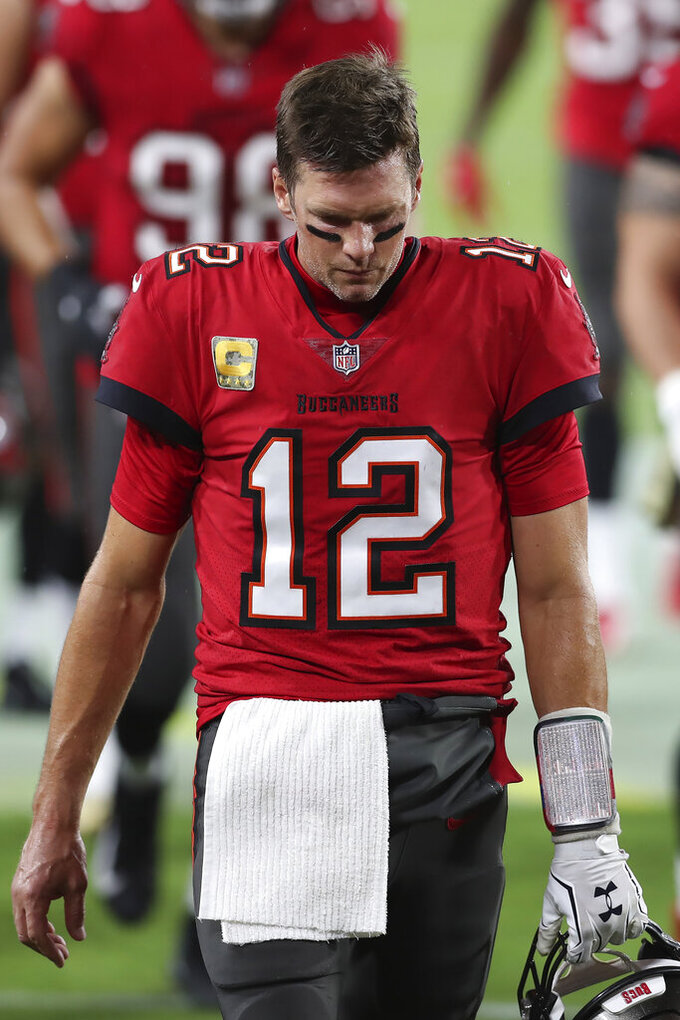 Tampa Bay Buccaneers quarterback Tom Brady (12) reacts as he leaves the field at the end of the first half of an NFL football game against the New Orleans Saints Sunday, Nov. 8, 2020, in Tampa, Fla. (AP Photo/Mark LoMoglio) 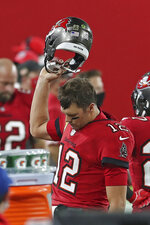 The rest of the season will be about proving it after the most-lopsided loss of Tom Brady’s career raised questions about how a team that’s played so well at times could turn around and look as bad as they did against the New Orleans Saints.

“We know we’re not that type of team, especially against a team who we obviously wanted to really beat,” linebacker Lavonte David said Monday, reflecting on a 38-3 loss that dropped the Bucs from first place in the NFC South.

“To go out there and put on a show like that on Sunday night — guys feel some type of way about it,” David added. “All you can do is move on from it.”

Two of their three losses this season have come against the three-time defending division champion Saints, though, with the latest underscoring the Bucs still have a ways to go to overtake New Orleans as the best team in the NFC South.

Brady has thrown seven interceptions through nine games, five of them against the Saints, who also beat the Bucs 34-23 in Week 1.

“It’s about playing better and execution. We all have to do our job a lot better,” Brady said Sunday night. “When you play good teams, there’s little margin of error.”

Coach Bruce Arians said the team can’t afford to dwell on what’s already happened if it is going to realize its potential.

Brady said it starts with getting back on the practice field, learning from mistakes and getting better every day.

“It’s not about predicting the future. I’m not here to say, ‘This is what we’re going to do based on losing a game,’” the six-time Super Bowl champion said.

The Packers and the Las Vegas Raiders are the only teams the Bucs have beaten who currently have winning records. They also have wins over the Broncos, Chargers, Panthers and Giants, who are a combined 10-24.

“I think that’s how you’re usually judged,” Arians said. “We were pretty good against Green Bay and really poor against New Orleans.”

Despite having his two worst games of the season against the Saints, Brady has been everything the Bucs could have asked for — and more — since signing a two-year, $50 million contract in free agency.

Arians and general manager Jason Licht have assembled a star-studded cast around him, bringing in Rob Gronkowski, LeSean McCoy, Leonard Fournette and most recently, Antonio Brown, to bolster an already impressive group of playmakers led by Mike Evans and Chris Godwin.

Prior to Sunday night, Brady had thrown 17 TD passes and just one interception over his previous six games.

Evans and Hall of Famer Randy Moss are the only players in NFL history to begin a career with six consecutive seasons with at least 1,000 yards receiving. Although he has a team-leading seven TD receptions and has been hobbled by a sore ankle, he’s not getting a lot of passes thrown to him.

“Part of it’s scheme, part of it’s reading out some things that Mike was open on and just finding him. ... But we’ve got to do a better job,” Arians said.

The defense leads the NFL with 16 takeaways. The Bucs are second in sacks with 29, three fewer than the unbeaten Pittsburgh Steelers.

Tampa Bay has played three games with prime-time starts and played poorly each time, going 1-2 with losses to the Saints and Bears and a 25-23 victory over the Giants.

“That’s one of the things we have to look at. ... We have stunk in those games,” Arians said.

The Bucs will host the Rams on “Monday Night Football” in two weeks.

With the exception of losing O.J. Howard (Achilles) for the year, the Bucs avoided major injuries the first half of the season. Evans, Godwin, Scotty Miller and Justin Watson were slowed by various injuries at times, which was one of the factors contributing to the decision to sign Brown, who made his debut Sunday night after serving an eight-game suspension for violating the NFL’s personal conduct policy.

The Bucs try to get back on track at Carolina. The schedule down the stretch also includes tests against the Rams, Chiefs, Vikings and Falcons at home and Lions and Falcons on the road.