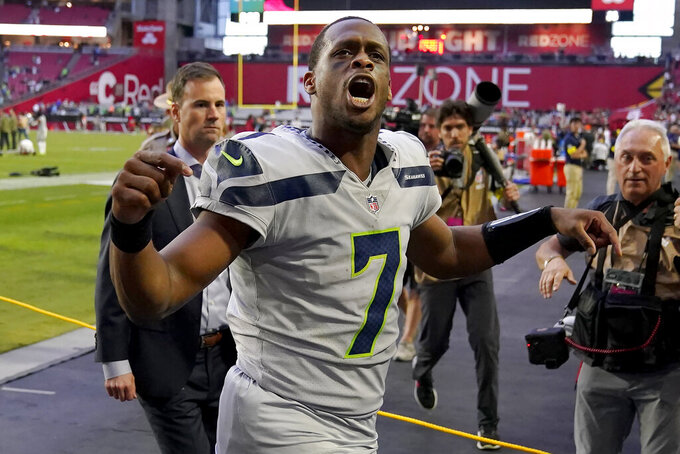 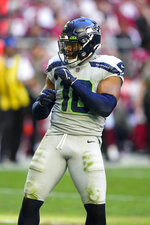 RENTON, Wash. (AP) — Before the season, oddsmakers set the over-under on the number of wins for the Seattle Seahawks at 5 1/2. And many observers thought taking the under would be the smart move.

Halfway through the season, those who were bullish on the Seahawks have already cashed in, and Seattle is pushing toward the playoffs.

“Sometimes it’s good for people to not place expectations on you, to play as the underdog, and I don’t know if that’ll continue, but it’s kind of good for where we are right now,” Seattle quarterback Geno Smith said.

Seattle improved to 6-3 with Sunday’s 31-21 win at Arizona. The Seahawks have won four straight and have a 1 1/2-game lead in the NFC West.

A big reason for the low expectations surrounding Seattle was Smith, who hadn't been a full-time starter since 2014. Smith made one of his few critical mistakes of the season when he threw a pick-6 against the Cardinals, but he recovered to lead Seattle on three consecutive touchdown drives of 70 yards or longer.

Smith leads the NFL in completion percentage. He’s third in passer rating and is tied for fourth in touchdown passes. If those numbers hold, he might be a contender not just for comeback player of the year, but for MVP.

Smith isn't the only reason for Seattle's unexpected success. Rookies are thriving in key roles. Smart free agent signings are contributing. And Seattle’s defense has made a dramatic shift from where it was at the start of the season and has been one of the best units in the league over the past several weeks.

“The last couple of weeks we have been playing really good ball,” coach Pete Carroll said. “It’s so pleasing that we’ve arrived here.”

Through nine games, no rookie class in the league has been better than Seattle's. Charles Cross and Abraham Lucas have been excellent on the offensive line. Running back Kenneth Walker III is a contender for offensive rookie of the year. Tariq Woolen’s play at cornerback already has teams avoiding throwing in his direction, while cornerback Coby Bryant and defensive end Boye Mafe have made strong contributions.

No matter what happens the rest of this season, Seattle has cornerstones to build around.

Depth is one area where Seattle has not faced a significant challenge. Other than running back Rashaad Penny and safety Jamal Adams, the Seahawks have avoided major injuries to starters. They clearly are talented enough to win with their current lineup, but if injuries mount that depth will be tested.

The signing of free agent edge rusher Uchenna Nwosu was an under-the-radar move. Halfway through the season, Nwosu is clearly outplaying his two-year, $19 million contract.

He has set a career high in sacks with seven, tied for sixth in the league. He’s tied his career bests in solo tackles, forced fumbles and quarterback hits and is providing a level of disruption the Seahawks have desperately been seeking.

“I didn’t see him as productive and as much of a problem for our opponents that he has created,” Carroll said. “We have really cut him loose to use his instincts and whatever he sees, he can go for and take a shot at.”

Preseason prognostications. Before the season, the Seahawks were expected to be among the worst teams in the league and in line for a high draft pick next April. Instead, they’re on pace to make the playoffs for the 10th time under Carroll. And they still could end up with a high draft pick — one of the two first-round selections they got from Denver in the trade that sent Russell Wilson to the Broncos.

Seattle is unsure about the status of No. 3 wide receiver Marquise Goodwin and edge rusher Darrell Taylor going into this week’s game against Tampa Bay in Munich, Germany. The Seahawks have a bye after their overseas trip and both players appear likely to return after that if they can't play against the Buccaneers. Backup safety Joey Blount could be back from a quadriceps injury this week.

7 — This is the seventh time during Carroll’s tenure the Seahawks have started 6-3. In five of the six previous seasons, Seattle went on to make the playoffs — including four times as NFC West champion.

After the game in Germany against Tom Brady and the Buccaneers, Seattle has a bye and then plays three of its next four games at home. Two of those games are against Las Vegas and Carolina, teams with a combined 4-13 record.