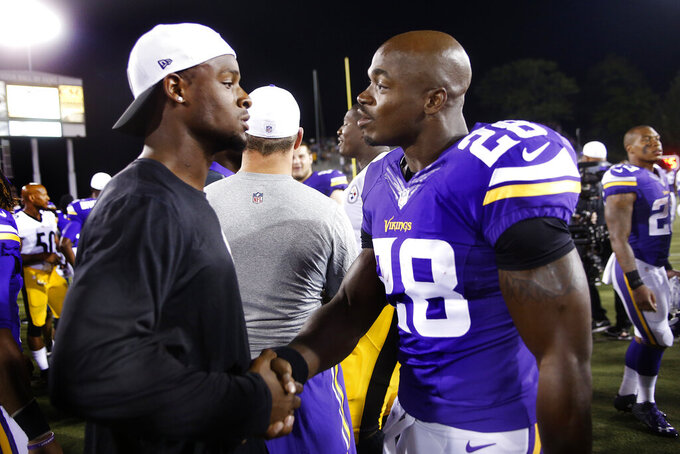 FILE - Minnesota Vikings running back Adrian Peterson, right, visits with Pittsburgh Steelers running back Le'Veon Bell, left, on the field after an NFL preseason football game in Canton, Ohio, Sunday, Aug. 9, 2015. Adrian Peterson still wants to play in the NFL after he fights Le’Veon Bell in the boxing ring. The four-time All-Pro running back Peterson is taking on the two-time All-Pro back Bell on Saturday night at Crypto.com Arena in Los Angeles. It’ll be the first boxing match for the former NFL stars. (AP Photo/Tom E. Puskar, File)

Adrian Peterson still wants to play in the NFL after he fights Le’Veon Bell in the boxing ring.

A four-time All-Pro running back, Peterson is taking on the two-time All-Pro back Bell on Saturday night at Crypto.com Arena in Los Angeles. It’ll be the first boxing match for the former NFL stars.

The 37-year-old Peterson played for Tennessee and Seattle last season while Bell spent time with Baltimore and Tampa Bay. Peterson is fifth on the all-time list with 14,918 yards rushing and fourth with 120 touchdowns rushing.

“Still chasing that championship, and you only get the opportunity to do this once in a lifetime,” Peterson told the AP Pro Football Podcast. “If I could continue to play and make it to 15, 16 years, why not? Fifteen years from now, I’ll be sitting back reminiscing about the opportunity that I had and the guys I played against. I know I have the ability to get out there and still play at a high level, so that’s something that I desire, to continue to play.”

Peterson made seven Pro Bowls and was the 2012 Associated Press NFL MVP during 10 years with the Vikings. Since leaving Minnesota, he’s played for six other teams, including Arizona, New Orleans, Washington and Detroit.

“It was a blessing,” Peterson said about his journey around the league. “I’ve made some great relationships, been able to explore some great cities, the culture there, see how different organizations move and how they run the show. I played with Drew Brees. I played with Russell Wilson, got to play with Larry Fitzgerald, some great quarterbacks, great players just in general. It’s been a blast.”

Now Peterson is set for a different challenge.

Why put on the gloves?

“I got called out,” Peterson said. “But, no, I got an opportunity. I’ve been training hard, working out and grinding. And, I’ve learned a lot about boxing and that mentality you got to have and the conditioning you got to have, so ready to roll.”

Peterson has prepared for his bout by reading about different boxers and watching old fights.

“I’m a visual guy so watching a lot of Mike Tyson, (Floyd) Mayweather and old-school footage,” he said. “Just seeing people’s techniques, defensive skills, feet movement, things of that sort. So that’s kind of how I get my knowledge.”

Peterson and Bell don’t have any history of bad blood. They just happen to be each other’s opponent.

“I don’t have any animosity against him or anything like that,” Peterson said. “But, obviously, getting in the ring, up until that last second runs off, it’s going to be me and you. I got nothing but respect for him.”

If Peterson gets through the fight with no physical issues, he won’t need much time to be ready to play football. Training to box has kept him in excellent condition. He’d welcome an opportunity to join a contending team.

“That would be the ideal scenario, but if that wasn’t an option, playing would be awesome. I have love for the game and I’m a competitor.”