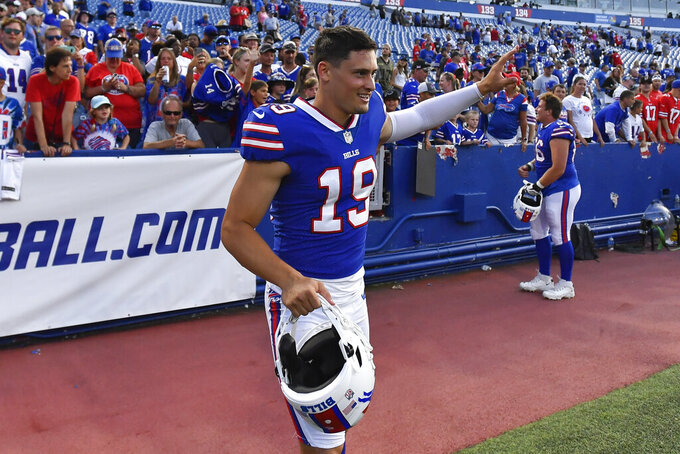 The Buffalo Bills decided releasing Matt Araiza was the “right thing” to do, two days after the rookie punter was accused of gang-raping a teenager in a civil lawsuit.

The only surprise is that it took this long.

After a “thorough examination” by the team failed to produce sufficient information for management to act, disturbing details in the lawsuit plus public backlash forced the Bills to cut Araiza.

“We were trying not to rush to judgment,” Beane said. “Obviously, Matt’s version was different.”

Thanks to a dynamic offense led by Josh Allen and a stout defense, the Bills enter the season as favorites to win the Super Bowl, per oddsmakers. They don’t need a sixth-round pick — even a “Punt God” — to be the difference-maker in January and February.

Fresh off suspending Browns quarterback Deshaun Watson 11 games for sexual misconduct, the NFL is concerned about public perception and Commissioner Roger Goodell has made it clear the league will not tolerate any violence against women.

But the NFL has limitations with this because the incident occurred while Araiza was in college so he can’t be punished under the personal conduct policy. The league prefers to let the legal process play out first.

A San Diego police investigation has been turned over to the district attorney’s office to determine whether to pursue charges. DA spokeswoman Tanya Sierra said Friday there was no timeline as to how long a decision will take.

Still, “protecting the shield" comes first. There was no time to wait in this case.

Araiza, who led San Diego State to a record-setting season and two of his former Aztecs teammates, were accused of gang-raping a 17-year-old girl at an off-campus party last fall. The attorney for the California teenager told The Associated Press on Friday the Bills didn’t contact him for details.

“We’re not perfect," Beane said. "You hear things. You try to find out what’s factual and what’s an accusation. Ultimately, we don’t know. We’re not detectives.”

“There are many things that we could not get our hands on,” Beane said. "You’re trying to put facts around a legal situation sometimes with limited information.”

The Bills didn’t do enough homework before the draft, either. Beane said the team wasn't aware of Araiza's involvement in the incident prior to the draft.

Several other teams executives also have told the AP they weren’t aware. But executives from two different teams told the AP they became aware of Araiza’s involvement in an incident during the draft process. Neither person knew the extent of the allegations and both people said it didn’t impact Araiza’s status on their draft boards because they weren’t interested in selecting the punter.

All the people spoke to the AP on condition of anonymity because of the sensitivity of the matter.

NFL teams typically do extensive research on players before the draft, especially players they plan to select in the early rounds. It’s not uncommon for anyone with a potential red flag to slide in the draft.

Despite winning the Ray Guy Award given to the nation’s top punter in college football, Araiza wasn't the first of four punters drafted. Penn State’s Jordan Stout was selected in the fourth round at 130 overall by the Ravens, and Georgia’s Jake Camarda was taken by the Buccaneers three picks later.

Some clubs, of course, do a better job scouting players and uncovering character questions. The Bills fell way short in their assessment of Araiza, who was chosen with the 180th pick.

Araiza is innocent until proven guilty, but it wasn't too late for the Bills to correct a mistake.