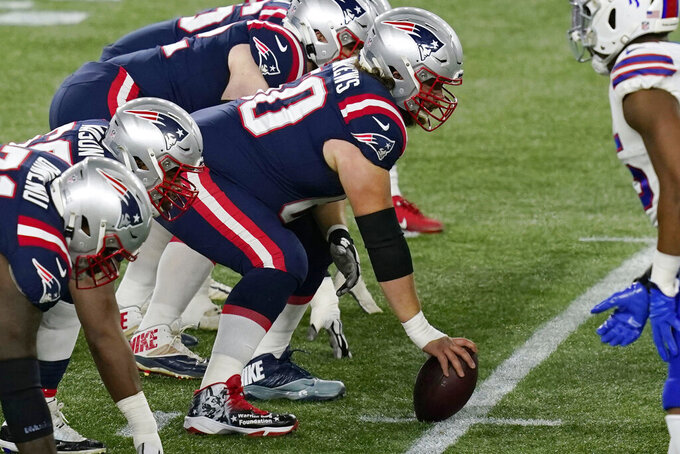 FILE - New England Patriots center David Andrews prepares to snap the ball at the line of scrimmage in the first half of an NFL football game against the Buffalo Bills in Foxborough, Mass., in this Monday, Dec. 28, 2020, file photo. There was a moment when it seemed as if center David Andrews would be adding his name to the list of a key Patriots offensive linemen joining new teams in 2021. He explored possible new suitors in free agency, including the rival Dolphins, but in the end decided to return to the only NFL team he’s played for. After watching the team spend big in free agency and bring in a possible quarterback of the future in Mac Jones, he says he's excited about being part of a rebuilt roster that hopes to turn the page on a 7-9 season.(AP Photo/Elise Amendola, File)

BOSTON (AP) — When free agency opened last month, there was a moment it seemed center David Andrews would be adding his name to the key Patriots offensive linemen joining new teams in 2021.

Then, in a surprise move, center Ted Karras inked a one-year, $4 million pact to return to New England after spending 2020 with division-rival Miami. It could have been a signal Bill Belichick was preparing to move on from Andrews, a locker room favorite who started 69 of his 72 NFL games since being signed by New England as an undrafted free agent in 2015.

It prompted Andrews to initially explore possible suitors on the open market, including the Dolphins. But in the end he decided to return to the only NFL team he’s played for, agreeing to a four-year, $19 million deal on March 19.

He said Tuesday that he always held out hope he’d find a way to be back with the franchise with which he’s won two Super Bowls.

“I don’t ever believe in closing any doors,” Andrews said.

A captain the past two seasons, Andrews has been one of the Patriots’ most dependable players up front, starting all 16 games in both 2016 and 2018. He spent all of 2019 on injured reserve due to a blood clot issue before returning in 2020 and making 12 starts.

He said the addition of Karras didn’t give him any pause about returning. In fact, he looked at it as a plus.

“You get a friend back (in Karras) and you obviously lost one in Joe,” Andrews said. “I never shut the door or anything like that. But Ted can help this football team. Anybody that can help the football team, you want the person on the roster.”

Despite Thuney’s departure, the Patriots managed to maintain continuity on the offensive line.

New England reportedly picked up the fifth-year option for left tackle Isaiah Wynn Monday, locking up the 2018 first-round pick through the 2022 season.

In addition, right guard Shaq Mason is under contract through 2023 and Mike Onwenu is coming off a rookie season in which he started all 16 games at right tackle. Thuney’s spot is a question mark, but second-year player Justin Herron could switch from his natural tackle position if necessary.

Andrews said he’s also been impressed with how aggressive Belichick and the rest of the front office have been bringing in talent both in free agency and through the draft, from adding veteran tight ends Jonnu Smith and Hunter Henry, to drafting Mac Jones as a possible quarterback of the future.

More than anything, it's proof that the team isn't sitting idle coming off a 7-9 season.

“I think you got to be excited looking at it, right?” Andrews said. “Now it comes down to the stuff people don’t want to talk about is how much work we put in over the next three to four months. We made a lot of improvement on paper. … Now we have to become a football team. We’ve got to work together, learn to work together, because obviously there’s going to be a lot of new faces.”