Arians not speaking for Brady regarding 4th down confusion 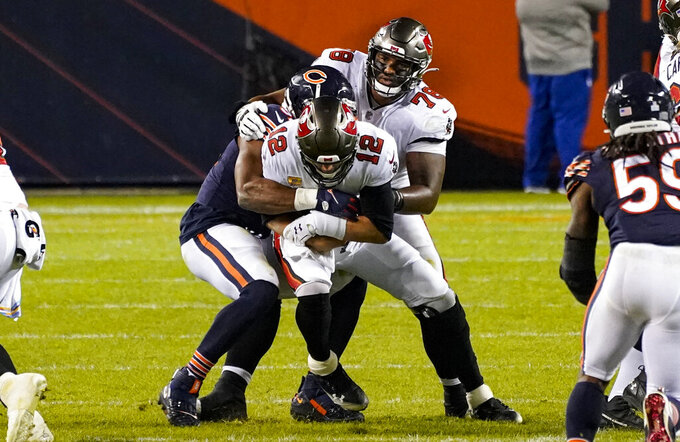 TAMPA, Fla. (AP) — If Tom Brady lost track of what down it was on the final play of a failed comeback bid against the Chicago Bears, the Tampa Bay Buccaneers quarterback is keeping it to himself.

And coach Bruce Arians is steering clear of speaking for the six-time Super Bowl champion, whose fourth-down incompletion sealed the team’s fate in an error-filled 20-19 loss at Soldier Field on Thursday night.

“I don’t know how to answer it for him,” Arians said Friday, reflecting on Brady’s decision to try to move the Bucs closer to field goal range rather than attempt a shorter throw to pick up a first down on fourth-and-6 from the Tampa Bay 41.

“We all knew it was fourth down,” the coach added. “I think he saw what he saw.”

After the throw intended for tight end Cameron Brate was broken up by Bears safety DeAndre Houston-Carson, Brady raised four fingers in the air and appeared to be surprised Tampa Bay had turned over the ball on downs with 33 seconds remaining.

If the potential winning drive ended with Brady mistakenly thinking he had another down to try to keep his team’s hopes alive, it wasn’t the only miscue on offense that affected the chances for what would have been a fourth consecutive win.

Brady was sacked three times and knocked down another eight by the Bears (4-1), who overcame three deficits to take the lead for good on Cairo Santos’ 38-yard field goal with 1:13 remaining. The Bucs also hurt themselves with a critical first-half fumble and accumulated 11 accepted penalties for 109 yards.

Arians, who on Thursday night initially said Brady knew it was fourth down, pinned the loss on poor coaching.

While Brady talked about the need to correct mistakes and eliminate turnovers and costly penalties, the 43-year-old quarterback did not say if he lost track of what down it was on Tampa Bay’s final offensive play.

“I knew we needed a chunk and I was thinking about more yardage. It was just bad execution,” Brady said.

“You’re up against the clock. I knew we had to gain a chunk, so I should have been thinking more first down instead of chunk in that situation,” the quarterback responded when asked a second time about the final play.

The Bucs were the NFL’s most penalized team last season. They’re on course to rank among the league leaders again.

“Just gotta do a better job of coaching. It all falls on the staff — mistakes that we’re making in ballgames that shouldn’t be made,” Arians said. “And they’re not every week. ... That was one of those games where there were a bunch of them. Penalties, technique errors, things that we should have coached better.”

Despite Leonard Fournette and LeSean McCoy being sidelined by injuries, the Bucs continue to run the ball effectively . Ronald Jones topped 100-yards rushing for the second straight week, averaging 6.24 yards per carry while gaining 106 on 17 attempts.

The Bucs were the third-most penalized team in the league entering Thursday night’s game and didn’t do anything to improve that standing. The offensive line was flagged five times on one third-quarter drive alone, prompting a sideline verbal scolding from Brady following a punt.

Tampa Bay’s run defense is one of the best in the league. The Bears managed 35 yards rushing. That’s three straight opponents who’ve been held to less than 50 yards on the ground. The team’s stretch of 11 consecutive games without yielding 100 is the longest in the NFL since 2014, when Detroit had an 11-game streak.

Arians has called the offensive line the most improved component of the team. While the Bucs did run the ball well against the Bears, the unit took a step back in pass protection, especially in the second half when Khalil Mack was all over Brady.

Defensive tackle Vita Vea, carted off the field in the fourth quarter Thursday night, broke his right leg and probably will miss the remainder of the season. Last week, the Bucs lost tight end O.J. Howard (ruptured Achilles tendon) for the year.

“It’s a big big loss because you lose players like O.J. and Vita, you plug the next man in but they’re not the same,” Arians said. “I hate it for (Vea). He was having such a great year.”

Meanwhile, the coach said it’s too soon to speculate on when WR Chris Godwin (hamstring) might return to the lineup. He’s missed three of the past four games.

34 — Points scored after takeaways this season, tied with Baltimore for third in the NFL behind Cleveland (45) and Seattle (42). The Browns, Seahawks and Ravens have only played four games.

Arians hopes the “mini-bye” that follows playing on Thursday night will give the Bucs a chance to get healthy, particularly on offense, where receivers Mike Evans, Scotty Miller and Justin Watson also have been slowed by injuries, before an Oct. 18 home game vs. Green Bay.