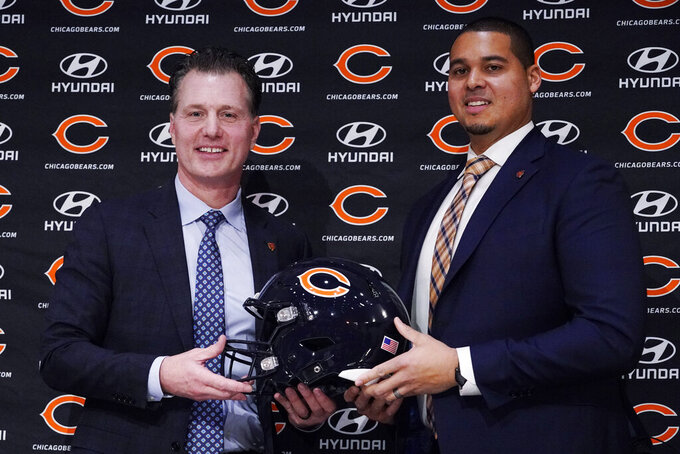 LAST YEAR: Chairman George McCaskey opted to give general manager Ryan Pace and coach Matt Nagy another opportunity after the Bears finished 8-8 in the regular season for the second straight year in 2020. It turned out to be their final chance in Chicago. The Bears went 6-11 to miss the playoffs for the ninth time in 11 years. That convinced McCaskey to make sweeping changes. Chicago fired Pace and Nagy and replaced them with GM Ryan Poles and Matt Eberflus.

CAMP NEEDS: One big question is how the offensive line will come together and whether QB Justin Fields will get the protection he needs, after he missed time last season with rib and ankle injuries. Adding Patrick means LG Cody Whitehair shouldn't have to worry about playing center and Sam Mustipher can compete for a spot at right guard. The Bears could go with Larry Borom and Teven Jenkins at tackle. Fields needs the line to hold up so he can stay healthy and show Poles and Eberflus he is indeed a franchise quarterback. On the other side, it remains to be seen how long DE Robert Quinn will remain with the team. Quinn, who set a franchise record with 18 1/2 sacks last season, showed up at a ceremony at Halas Hall in April after winning the veterans Brian Piccolo Award. But he was not at any of the voluntary or mandatory practices.

KEY CAMP COMPETITIONS: Mustipher and Dakota Dozier were competing for the right guard job, though Dozier was taken from the field on a cart in June. Assuming Quinn isn't traded, Trevis Gipson and Muhammad figure to compete at the other defensive end spot. Gipson had seven sacks last season. Muhammad spent the past four seasons in Indianapolis, where Eberflus was his defensive coordinator.

EXPECTATIONS: Though it's hard to see the Bears making a big leap in the NFC North, they are banking on improved play. Particularly from Fields. The former Ohio State star got thrust into the starting job early on when Andy Dalton was injured, after being penciled in for a sort of redshirt season and had a shaky season. Though he showed potential, he also had his share of struggles. Now, he needs to convince a new GM and coach he is indeed the long-term answer at a position that has historically haunted the Monsters of the Midway.