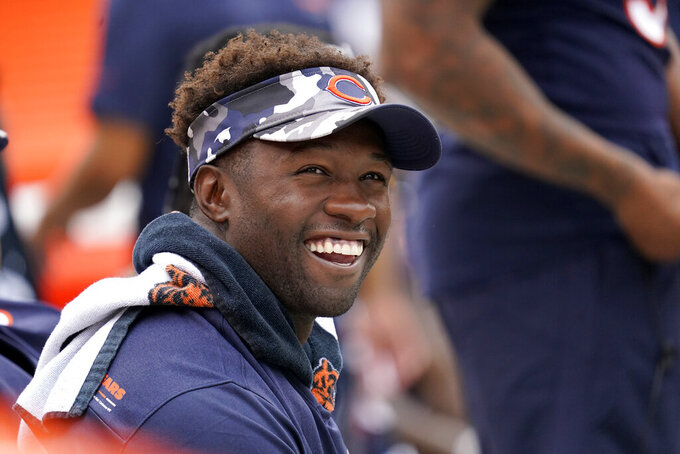 Chicago Bears linebacker Roquan Smith smiles on the bench during the second half of an NFL preseason football game against the Kansas City Chiefs Saturday, Aug. 13, 2022, in Chicago. The Bears won 19-14. (AP Photo/Nam Y. Huh)

LAKE FOREST, Ill. (AP) — Chicago Bears star linebacker Roquan Smith insisted Wednesday his focus is on the upcoming season and not his long-term future after a contract standoff with the team ended with no new deal.

Smith said there won't be any more negotiations with general manager Ryan Poles on an extension between now and the start of the season.

Nor is he focused on possibly striking a deal after this season to remain in Chicago.

“My focus is on making this year the best year I can and then go from there,” he said. “I don’t want to look forward too much to the future or anything like that.”

Smith figures to have a bright future whether he is playing in Chicago or elsewhere after this year. He hoped to strike a new deal, with the contract he signed after the Bears drafted him with the No. 8 overall pick in 2018 set to expire following this season.

But instead of an extension, things took a heated turn. Smith staged a “hold in” at the start of training camp, then went public with a trade request. He returned to practice about 1 1/2 weeks ago.

For now, Smith is zeroing in on the task at hand. And that means devoting his attention toward his performance with the season set to start on Sept. 11.

“It feels amazing being out there with my guys," Smith said. "That’s who you do it for, the love of the game, the guys in this locker room and everybody that supports me. It feels good to just be out there playing the game that you love, done so much for me.”

At 25 and a second-team All-Pro in 2020 and 2021, Smith is perhaps the Bears' best player. He's one of the leaders on defense, particularly after Khalil Mack got traded to the Los Angeles Chargers.

But he's not looking too far into the future. Nor is he looking back at the drama that played out during training camp.

Smith, who does not have an agent, opted to "hold in." That allowed him to attend meetings and watch practices without participating in drills.

Things escalated when he went public with a trade demand and accused the team of trying to take advantage of him. The Bears responded the next day by removing Smith from the physically unable to perform list, clearing the way to fine him for missing practices.

Smith ended the “hold in” and practiced for the first time on Aug. 20. He said then that the team did not fine him. And on Wednesday, he insisted he has no trouble putting the drama behind him.

“It’s already in the back of my mind,” he said. “It just came to the front when you just mentioned it.”

The Bears were busy Wednesday, claiming offensive lineman Alex Leatherwood off waivers a day after the 2021 first-round draft pick was let go by the Las Vegas Raiders.

Leatherwood, the No. 17 overall pick last year, struggled at right tackle before being moved to guard after four games. The Alabama product had difficulties inside, too, and dropped on the depth chart this summer before Las Vegas let him go.

“His run-blocking is really good," Eberflus said. "He’s got good balance when it comes to that. He stays on guys. That’s what we like about him the most right now.”

The Bears have retooled their line after giving up a league-leading 58 sacks last season. Leatherwood could complete with right guard Teven Jenkins and right tackle Larry Borom.