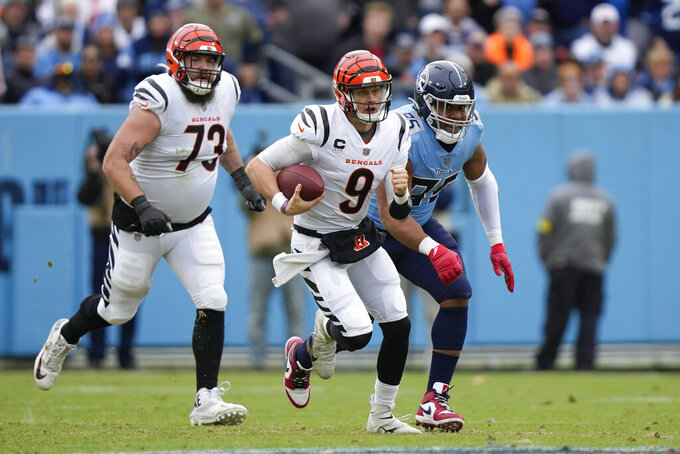 Cincinnati Bengals quarterback Joe Burrow (9) runs out of the pocket against the Tennessee Titansduring the first half of an NFL football game, Sunday, Nov. 27, 2022, in Nashville, Tenn. (AP Photo/Gerald Herbert)

TURNOVER DIFFERENTIAL: Chiefs minus-3; Bengals plus-1.

CHIEFS PLAYER TO WATCH: TE Travis Kelce is always worth watching. He already has 73 catches for 912 yards and 12 touchdowns, which is tied with the entire rosters of the Browns, Texans and Rams and more than the Colts, Patriots, Titans, Panthers, Giants, Broncos and Steelers.

BENGALS PLAYER TO WATCH: WR Tee Higgins has stepped up prominently in the absence of Ja’Marr Chase. Higgins caught seven passes for 114 yard last week that included a 24-yard grab to move the chains, and then the leaping 27-yard TD catch that gave Cincinnati a 20-13 lead in the fourth quarter. He had nine catches for 148 yards in the previous week’s win over Pittsburgh.

KEY MATCHUP: Chiefs passing game against Bengals secondary. Rookie Cam Taylor-Britt was pushed into service as a starter when Cincinnati's best cornerback, Chidobe Awuzie, was injured. Another rookie, Dax Hill, is also likely to see some playing time in the secondary. Kansas City has the NFL's top passing game with Mahomes having another stellar season.

SERIES NOTES: The Bengals' Evan McPherson kicked a 31-yard field goal in overtime last January to top the Chiefs and put Cincinnati in the Super Bowl. A month earlier during the regular season, the Bengals prevailed 34-31 in Cincinnati. The Chiefs last beat Cincinnati in 2018, a 45-10 rout at Kansas City. The longest win streak in the series was five by the Bengals from 1972 to '77.

STATS AND STUFF: The Chiefs have won five straight games, giving them 10 straight seasons with a win streak at least that long. ... Kansas City has eclipsed 400 yards seven times this season, the fourth most in franchise history. That includes five straight, which is tied for the club record. ... QB Patrick Mahomes passed Trent Green last week for second in Chiefs history with 2,787 pass attempts. Len Dawson is first with 3,696. ... Mahomes has thrown a TD pass in 16 consecutive games and for at least 300 yards in his past six. ... Mahomes has thrown 46 TD passes to Kelce, tied with Dawson and Otis Taylor for the most by a battery in Chiefs history. ... Kelce has caught a pass in 137 consecutive games, trailing only the Cardinals’ DeAndre Hopkins (142) among active players. ... First-round pick George Karlaftis had his first sack for Kansas City last week against the Rams. ... DT Chris Jones has at least a half sack in six straight games, tying the third-longest streak in Chiefs history. Jones set the record with 11 straight in 2018. ... Chiefs LB Nick Bolton has intercepted a pass each of the past two games. ... The Bengals have won seven of the past nine, including three in a row for the first time this season. ... Cincinnati QB Joe Burrow used seven different receivers in passing for 270 yards and a TD in last week's win over the Titans. ... The Bengals were penalized nine times for 80 yards last week. ... WR Tee Higgins had seven receptions for 114 yards last week, including a leaping 27-yard TD grab in the fourth quarter that gave the Bengals the lead for good. ... Cincinnati's defense held Titans star Derrick Henry to 38 rushing yards with an average of 2.2 per carry. ... Burrow is tied for second among NFL quarterbacks with 23 TDs and is third with 3,160 passing yards. ... Mixon has 521 yards from scrimmage yards and six rushing touchdowns in four home games this season.

FANTASY TIP: Bengals RB Samaje Perine is taking advantage of increased playing time with Mixon out. He rushed for 58 yards and a TD and caught four passes for 35 yards in last week's win over Tennessee. In the previous week's win over Pittsburgh, Perine became the first Bengals running back with three TD catches in a game.