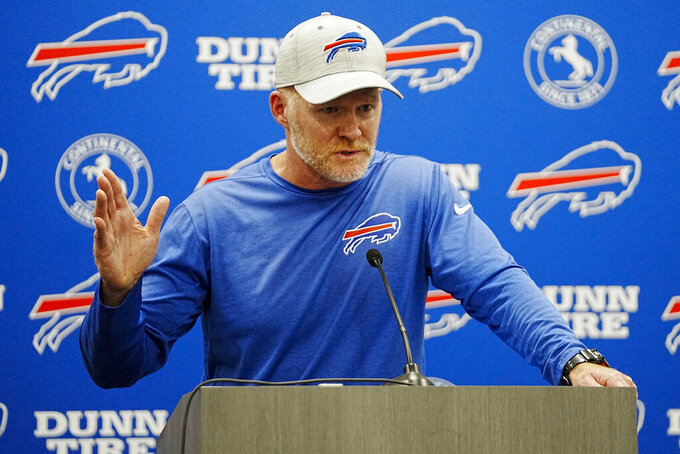 The decision to cut ties with the 22-year-old represents a major reversal for the Bills, coming two days after they backed the player based on the findings of what the team called its “thorough examination” of the allegations filed in the lawsuit.

And it comes less than a week after the Bills — while aware he was the target of a police investigation — cleared the way for Araiza to take over the punting duties by cutting returning veteran Matt Haack on Monday.

“The last 48 hours have been very difficult for a lot of people. It’s been tough. And we sympathize with this whole situation, all the parties involved, this young woman, what she went through,” Beane said during a 26-minute news conference, while seated alongside coach Sean McDermott.

“But at this time, we just think it’s the best move for everyone to move on from Matt and let him take care of this situation and focus on that. So, we’re gonna part ways there,” Beane added.

Beane said the Bills were not aware of the allegations made against Araiza at the time they selected him in the sixth round of the draft in April. And had they known, he said, they would have removed him from consideration.

Araiza’s release begins to ease a crisis which has shaken the two-time AFC East champions. McDermott was visibly upset while discussing the situation following a 21-0 preseason loss at Carolina on Friday night.

“I’m hurt,” McDermott said. “It’s not easy to to hear about some of the things that I’ve heard about over the last several hours say. Haven’t slept a lot to be honest with you.”

The Bills began distancing themselves from Araiza as early as Friday, when he was held out from playing. He instead watched the game from an undisclosed location in the stadium rather than from the sideline along with his teammates.

On Saturday, Araiza was not present for practice even though the Bills said he was on his roster, while at the same time his No. 19 jersey was no longer available for sale on the Bills’ online store after being listed earlier in the day.

Araiza’s only comment since the lawsuit was filed came in a statement released by his agent during the game Friday.

“The facts of the incident are not what they are portrayed in the lawsuit or in the press. I look forward to quickly setting the record straight,” Araiza said.

In a text to The Associated Press, Araiza’s lawyer, Kerry Armstrong, defended his client by writing: “I am sure he is very upset and disappointed that his career with the Bills ended not because he played poorly, but because of false allegations leveled against him by a young lady and her attorney. I hope he is back in the NFL soon.”

The victim’s lawyer Dan Gilleon issued his own statement by saying the Bills ignored concerns he raised about Araiza when contacting the team in late July.

“The Buffalo Bills had no choice but to cut their young punter after so badly botching their response to our claim,” Gilleon said. “They ignored us, (when) I warned them would happen could be avoided if they just kept their heads in the sand. This is what enablers do.”

Beane said the team did as much as it could in getting as many details as possible, while noting many of the allegations were unavailable because the results of the San Diego police investigation has not been released. He said the team decided not to “rush to judgment” based on the information it had, while noting Araiza never changed his version of what happened.

“You want to give everyone as much due process as you can. Again, we’re not a judge and a jury,” Beane said.

The lawsuit filed in San Diego County Superior Court accused Araiza and two San Diego State teammates of raping a then-17-year-old girl at a Halloween party at an off-campus home where Araiza had been living.

The results of the police investigation are in the hands of the district attorney, though there is no timeline as to when a decision will be made on whether or not to press charges.

Executives from two different teams told The Associated Press they became aware of Araiza’s involvement in an incident during the draft process, but neither person knew the extent of the allegations. Executives from three other teams said they had no knowledge of the allegations against Araiza before the draft and only learned of the incident Thursday. All the people spoke to The AP on condition of anonymity because of the sensitivity of the matter.

Beane said it was unclear who — Araiza or the victim’s lawyer, Gilleon — first informed the team of the allegations. As for the decision to not contact Gilleon for more information, Beane said the team’s attorney, Kathryn D’Angelo, “had heard what he had to say, and that’s when we began our process.”

“We’re not perfect. But I can tell you, we just tried to do what was right,” Beane said. “In our heart of hearts, I can lay my head down at night knowing that I’ve tried to do what’s right.”

The Bills also informed the NFL of the incident once they were made aware of it, a person familiar with the situation told The AP. The person, speaking on condition of anonymity because of the sensitive nature of the matter, wasn’t certain of the timeline.