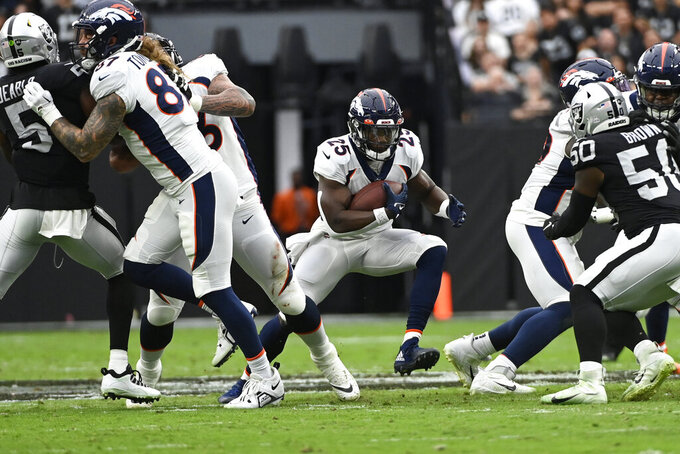 Denver Broncos running back Melvin Gordon III (25) runs the ball against the Las Vegas Raiders during the first half of an NFL football game, Sunday, Oct. 2, 2022, in Las Vegas. (AP Photo/David Becker)

TURNOVER DIFFERENTIAL: Colts minus-6, Broncos even.

COLTS PLAYER TO WATCH: RB Nyheim Hines. The Colts desperately want to get their running game chugging and Jonathan Taylor (toe, ankle) is out. So, Hines expects get a heavier workload. Indy has wanted Hines more involved in the offense this season and his breakaway ability could be helpful on the ground and through the air.

BRONCOS PLAYER TO WATCH: RB Melvin Gordon. His fifth fumble in five games was returned for a 68-yard TD at Las Vegas. The Broncos probably have no choice, but to trust the veteran can fix his career-long fumbling issues because Javonte Williams (ACL, LCL) is out for the year, Latavius Murray only signed Monday and Mike Boone also struggled against the Raiders.

KEY MATCHUP: Both teams' running backs vs. the other team's run-stuffers. If either team can gain yards on the ground, it'll make it easier on their QB. Otherwise, this game could be another prime-time slog.

KEY INJURIES: Colts coach Frank Reich ruled out Taylor, the 2021 NFL rushing champ, along with play-making safety Julian Blackmon (sprained left ankle). Also, three-time All-Pro LB Shaquille Leonard and versatile DL Tyquan Lewis have been ruled out. Both started the week in the concussion protocol. Pro Bowl DT DeForest Buckner (hip) was on a pitch count Sunday. The Broncos will be without RB Javonte Williams (ACL) and OLB Randy Gregory (knee), two of their best players. Williams is done for the year and Gregory will miss at least a month and maybe longer. Also out are S P.J. Locke, a key special teams player, and OLB Aaron Patrick, both of whom are in concussion protocol. OLB Jonathan Cooper and RG Quinn Meinerz are still dealing with pulled hamstrings.

SERIES NOTES: The Broncos have won two of the past three in this series and are 8-3 all time at home. ... Indianapolis has won all three playoff matchups... The most-anticipated game in the series came Oct. 20, 2013, when Peyton Manning returned to Lucas Oil Stadium for the first time as a visitor. Indy won that game 39-33. ... Hall of Fame QB John Elway was originally selected by the Colts No. 1 overall in the 1983 draft before being traded to Denver.

STATS AND STUFF: Indy has one win in its past six games. ... QB Matt Ryan has eight turnovers in his first four games with Indianapolis and his nine fumbles put him on pace for 38. The NFL’s single-season record is 23. ... Ryan’s 43 game-winning drives are tied with Brett Favre for sixth on the league’s career list. ... Mo Alie-Cox caught two TD passes Sunday and Jelani Woods caught two TD passes the previous week, putting both Colts among the league’s top-five scoring tight ends. ... Grover Stewart has 11 solo tackles this season, third among NFL defensive tackles. ... Colts LB Zaire Franklin has three games with 10 or more tackles this season and ranks second in the league with 45. ... Indy’s 11 10-play drives lead the NFL. ... The Colts have allowed 15 sacks this season. ... Indy’s defense ranks among the NFL’s best in three-and-outs (13) and yards per carry allowed (3.09). ... The Broncos have gone three-and-out 13 times, and nine of them came against the 49ers two weeks ago. ... Russell Wilson ranks fifth among active QBs with 296 TD and last week he surpassed Ryan (295) for the third-most touchdown passes by a player in his first 11 seasons in NFL history. Only QBs with more were Peyton Manning (333) and Dan Marino (298). ... Wilson is 9-2 on Thursday nights. ... LB Josey Jewell tied a career high with 14 tackles last week. ... CB Patrick Surtain II had a career-high eight tackles in his previous game and has eight pass breakups and two interceptions in 10 career home games. ... CB Ronald Darby has 15 pass breakups in six Thursday night games and S Kareem Jackson has 14 pass breakups in 18 games against the Colts.

FANTASY TIP: WR Courtland Sutton had his first TD catch of the season last week and WR Jerry Jeudy had his second, signs Denver's dawdling offense is getting going.