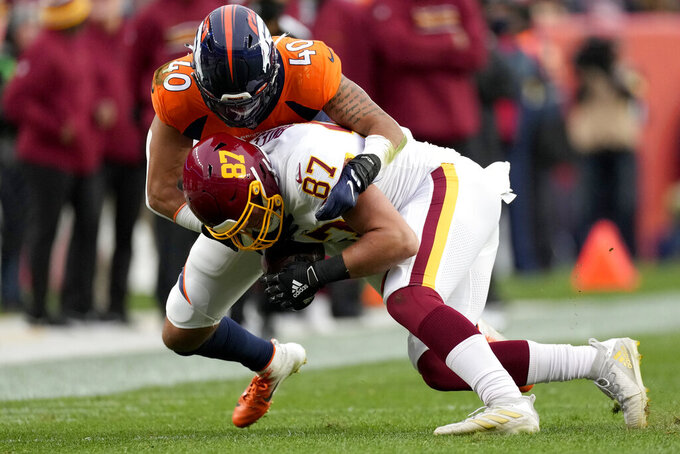 Inside linebacker Justin Strnad, who has moved into a big role in Denver's defense with starters Josey Jewell and Alexander Johnson on IR, went on the reserve/COVID-19 list along with cornerback Michael Ojemudia, who was on the cusp of returning from a pulled hamstring that has sidelined him since August.

The Broncos also activated guard Netane Muti from the reserve/COVID-19 list with a roster exemption among a flurry of transactions.

They placed right guard Graham Glasgow on IR. Glasgow broke a leg on the final play of the first half Sunday at Dallas.

Schlottmann was one of four backup O-linemen that finished Denver's 30-16 win over the Cowboys alongside starting center Lloyd Cushenberry III because of a rash of injuries.

Lock learned while on board the team's flight to Dallas on Saturday that someone close to him had the virus and he was isolated and tested when the team landed. His test came back positive.

Because he's been vaccinated, Lock is eligible to return whenever he has two negative tests 24 hours apart, unlike Packers QB Aaron Rodgers, who said he was feeling good last week but had to sit out at least until Nov. 13 because he wasn't vaccinated.

Lock’s infection briefly put a scare into the Broncos when starter Teddy Bridgewater, deemed a close contact, had to test and didn’t get the green light until minutes before warmups began.

Coach Vic Fangio said he thought he might have another quarterback quandary on his hands like he did last year when all of his QBs were ruled out against New Orleans because of COVID-19.

Instead, Bridgewater helped the Broncos to their biggest win since Super Bowl 50, throttling the heavily favored Cowboys, who were shut out until the final four minutes.