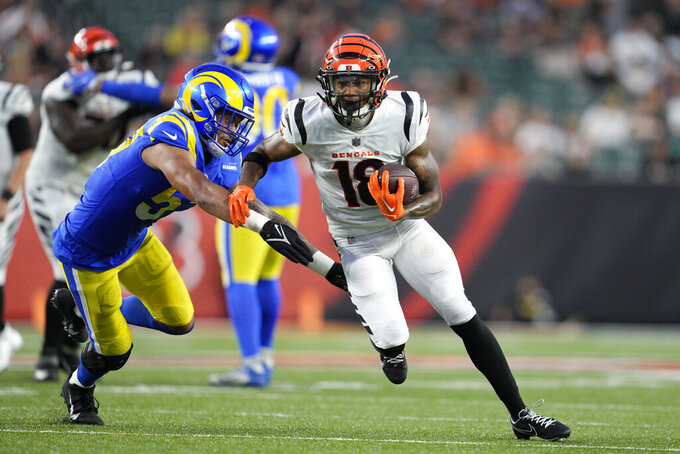 Cincinnati Bengals wide receiver Kwamie Lassiter II (18) runs after a catch against the Los Angeles Rams during the second half of a preseason NFL football game in Cincinnati, Saturday, Aug. 27, 2022. (AP Photo/Jeff Dean)

CINCINNATI (AP) — Jake Browning came off the bench to go 19 of 24 for 173 yards and a touchdown, leading the Cincinnati Bengals to a 16-7 win over the Los Angeles Rams on Saturday in a preseason game contested mostly by backups.

Tight end Justin Rigg caught a 3-yard touchdown pass from Browning with 4:34 remaining to secure the win in the rematch of last season's Super Bowl, which Los Angeles won 23-20.

Two days after the teams were involved in a benches-clearing brawl at a joint practice during which Rams star Aaron Donald swung a helmet, the game proceeded without incident. Both teams also appeared to avoid any serious injuries in their preseason finale.

Rams coach Sean McVay said any discipline of Donald would be handled “in-house.”

Third-string quarterback Bryce Perkins scrambled 3 yards for the Rams' only touchdown with 11:25 remaining.

The game was more notable for the players who didn’t play. Sidelined Bengals regulars included quarterback Joe Burrow, who is back at practice after undergoing an emergency appendectomy on July 26, the day before training camp opened.

Bengals backup quarterback Brandon Allen played most of the first half, going 11 of 15 for 130 yards. Allen and Browning are each vying to become Burrow's primary backup.

“Those guys have competed all training camp,” Bengals coach Zac Taylor said. “We’ve got a lot of confidence in Brandon. He’s got years in the system. He does a really good job operating our team. I think both of those guys have done a nice job — done what we needed them to do.”

Evan McPherson, who made five last-play, game-winning field goals as a rookie last season, connected on field goals of 39, 38 and 35 yards to give the Bengals (1-2) a 9-0 halftime lead. McPherson, Cincinnati's 2021 fifth-round draft pick, went 9-for-10 in the preseason.

Perkins finished 14 of 19 for 143 yards for the Rams (1-2). He also gained 33 yards on eight carries. He was playing in place of second-string quarterback John Wolford, who was nursing an injured thumb on his throwing hand.

“It can alter how you deliver the ball,” McVay said of Wolford's injury. “It became a risk-reward thing. Bryce is a fun guy to watch. This was a good opportunity for him.”

“We had two turnovers and they didn't commit any,” McVay said. “That's usually going to cost you the game.”

The stingy Bengals defense should be fortified by the return of safety Jessie Bates, a training camp holdout who accepted the team's franchise tag. Bates will be a “full participant” in practice next week, Taylor said.

The Rams host the Buffalo Bills on Thursday, Sept. 8, in the first game of the NFL's regular season.