Browns get second shot at Jackson, Ravens in must-win game 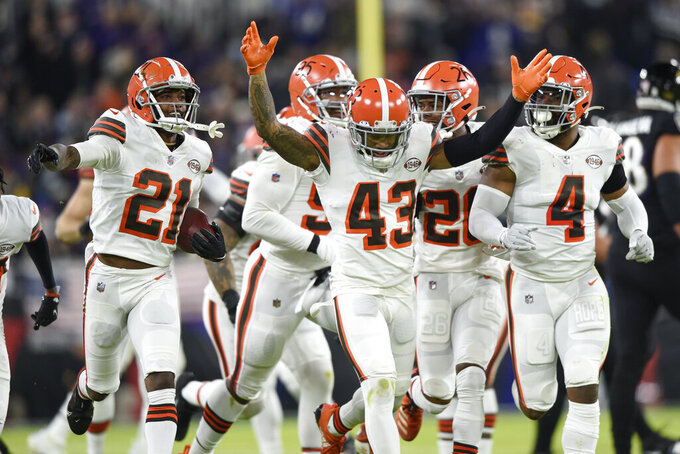 CLEVELAND (AP) — Lamar Jackson looked nothing like a former league MVP or superstar two weeks ago against the Browns, who unleashed an exquisite defensive game plan to slow Baltimore's spectacular quarterback.

It worked perfectly, minus one important detail.

After a badly needed bye week, the Browns (6-6) get a second shot Sunday at the AFC North-leading Ravens (8-4), who beat Cleveland 16-10 on Nov. 28 despite Jackson throwing a career-worst four interceptions while under constant duress.

It's impossible to overstate the importance of this week's game for the underachieving and puzzling Browns. To this point in a season bogged down by injuries and drama, they've not played up to their potential or expectations.

Although they've been inconsistent, and toward the top of the list of the NFL's biggest disappointments in 2021, the Browns have a chance to win their first division title since 1989 and make the playoffs for the second year in a row.

Not if they lose again to the Ravens.

“We're probably in the playoffs right now if you think about it — big picture,” said Browns left guard Joel Bitonio. “But it’s good. We’re excited. We’re definitely happy to have the opportunity to play for what we want in front of us, and we’re not making offseason plans.”

And while the Ravens sit atop the division, they're resting on an unstable perch.

Jackson, their unquestioned leader and marquee attraction, is in the biggest funk of his young, brilliant career. Counted on to do everything and probably handle more than any other quarterback, he's been making far more mistakes than highlight-reel plays.

In his past four games, Jackson's thrown eight interceptions, three to Cleveland's safeties. He's looked uncharacteristically hesitant, unsure whether to tuck the ball and run or stay in the pocket to keep a play alive long enough for a receiver to get open.

Last week, Pittsburgh followed Miami and Cleveland's blueprint and blitzed Jackson, sacking him seven times. Jackson wasn't sure after watching tape of the 20-19 loss to the Steelers if he could have done more.

“Sometimes you wish you could have made something happen, and sometimes it’s dealer’s choice,” he said. "You never know. It’s NFL football. It’s not street ball or anything like that. It’s a grown-man game, man.”

The AFC North is up for grabs with the Browns, Ravens, Bengals (7-5) and Steelers (6-5-1) all in contention for the title. The league back-loaded its schedule with division matchups, setting up drama and a pretournament tournament of sorts.

“It’s beautiful,” Browns tight end Austin Hooper said. "If you want to be the team you want to be, this is the time we have to go out there and show what we’re made of.”

The Ravens held the Browns to a season-low 40 yards rushing in the previous matchup by flooding the line of scrimmage with extra defenders and daring quarterback Baker Mayfield to throw. It's been a proven formula against a Cleveland offense that has lacked explosiveness.

Bitonio didn't fault coach Kevin Stefanski for not sticking with the run last time, but said commitment is key.

"There is something to be said for body blows and finishing a game, but when you’re not getting first downs, you’ve got to find a way to get those first downs,” he said.

Jackson and Baltimore's offense are stuck in a rut, scoring fewer than 20 points in four straight games. The slide began with a loss at Miami when the Dolphins blitzed him almost nonstop.

According to Pro Football Focus, Jackson has been blitzed on 36% of his drop backs, compared to 25% last season. He’s also averaging 6.8 yards per pass attempt when blitzed, and 8.0 when he isn’t.

During his 2019 MVP season, Jackson threw 24 TD passes and just three interceptions against the blitz.

“We spend a lot of time on that. It’s something that you have to do, and you do it within the framework of the protections that you’re using,” coach John Harbaugh said. “You have drop-back protections, play-action protections, movement pass — you work on everything. You do it year-round, really, and we work hard at it.”

A season of major injuries worsened this week as Baltimore lost starting cornerback Marlon Humphrey for the year with a pectoral tear. He joins Marcus Peters and safety DeShon Elliott on injured reserve.

Reserve cornerback Anthony Averett and others have to pick up the slack by playing more significant roles and taking on leadership.

“I definitely feel like I have to speak up a little bit more — for sure,” Averett said. “We don’t have the same amount of people out there like how we did before. New faces have got to step up.”

The Browns could be missing three key players as tight end David Njoku, linebacker Anthony Walker Jr. and punter Jamie Gillan were all placed on the reserve/COVID-19 list this week.

Njoku scored Cleveland's lone touchdown against the Ravens last month and leads the team with 407 yards receiving. His loss is complicated by the Browns being without tight end Harrison Bryan, who suffered a high ankle sprain at Baltimore.

Browns rookie James Hudson is expected to make his first career start at right tackle. He'll replace Blake Hance, who has struggled in four starts filling in for 2020 All-Pro Jack Conklin, done for the season with a knee injury.

A fourth-round pick from Cincinnati, Hudson made one start at left tackle.