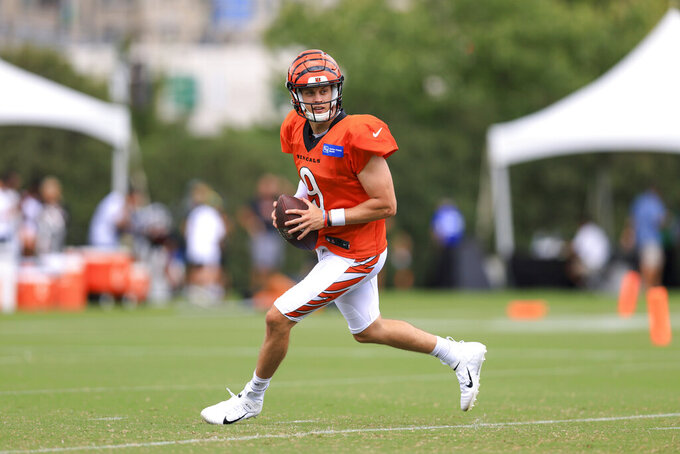 CINCINNATI (AP) — Joe Burrow is trying to pack on the pounds, gaining back the weight he lost after having surgery to remove his ruptured appendix three weeks ago.

The Cincinnati Bengals quarterback won't say how much he lost, but the pounds are coming back, along with the strength and mobility he had before the July 26 procedure.

The goal is for Burrow to be healthy for the regular-season opener against AFC North rival Pittsburgh in 3 1/2 weeks.

“I’m getting exponentially better each day,” Burrow said Wednesday in his first availability with reporters since the surgery. “Each day that I’m in the weight room, each day that I’m on the field I’m feeling stronger and stronger, so by Game 1 I’ll be feeling great.”

Burrow began participating in training camp on Sunday, threw passes in 7-on-7 drills and was set to work in 11-on-11 drills on Wednesday. Of course, defensive players will have to keep their hands off the valuable quarterback. The Bengals want to keep him off the ground as long as possible.

“The more I’ve done each day, the better I felt the next day. That’s kind of how it’s always gone to me,” he said.

“Just getting my abs and my core re-engaged. When they cut into you and do all that stuff, your core is going to lose some muscle and strength. Just working to get that back."

Don't expect to see Burrow play in the two remaining preseason games. Too big a risk. In fact, few if any Bengals starters are expected to play in the next one, against the New York Giants on Sunday.

“Obviously, I would have liked to,” Burrow said. “This whole thing has kind of thrown a wrench into that. I don’t anticipate playing in a preseason game, though.”

Coach Zac Taylor said the remaining preseason practices will be designed to get Burrow ready to go Sept. 11.

“Trust me, we’ve dialed out every practice, and he and I have had conversations about how many opportunities we have left to make sure we check all the boxes before we go into Week 1,” Taylor said. “And we feel very confident that we’ll be able to do that and be prepared going into that game.”

Before the appendicitis, the 25-year-old Burrow, who led the Bengals to the Super Bowl for the first time in 33 years in 2021, was enjoying a healthy, productive offseason after spending all of last year's training camp rehabbing from major knee surgery.

“I just think my whole career has been coming back from speed bumps and adversity,” he said. “I don’t know anything else. It’s another speed bump in the way.”

Also Wednesday, Sports Illustrated introduced its NFL preview issue with Burrow on the cover. The caption says “their ultracool QB has transformed the Bengals' vibe.”

Burrow shrugged it off.

"It’s just something that comes with success that will go away without success," he said. “It doesn’t mean anything to me.”