Carr, Raiders look to build on 2-0 start vs. Dolphins 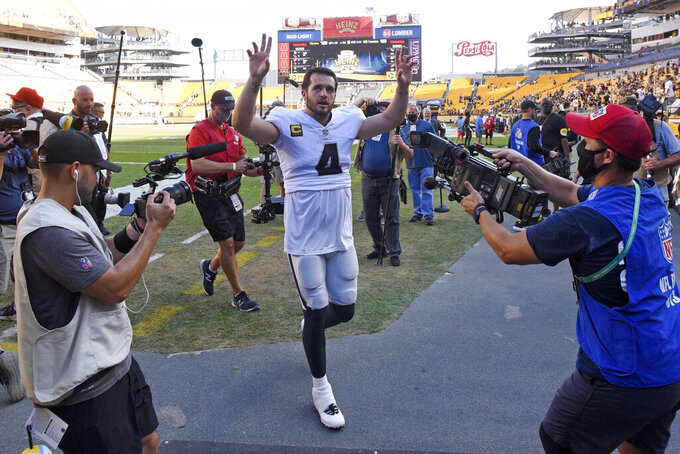 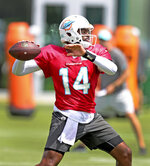 Derek Carr has heard all the accolades after his scintillating start to the season for the Las Vegas Raiders and has a message for those handing out praise: Cool it.

The back-to-back wins over Baltimore and Pittsburgh and the prolific numbers are nice, but Carr knows that won't matter if the Raiders can't beat Miami on Sunday in a rematch against the team that officially ended their playoff hopes late last season.

“Everyone is feeling good about themselves going 2-0 and all that kind of stuff,” Carr said. “Well, they don’t hand any trophies out after two weeks. They don’t give you any kind of anything. We have a team coming in here that got after us. They beat us.”

The Dolphins (1-1) beat the Raiders 26-25 last December when Ryan Fitzpatrick led a game-winning drive in the final 19 seconds.

That assured the Raiders of a fourth straight season without a winning record or playoff berth that they are hoping to snap this year.

Carr and an improved defense led by new coordinator Gus Bradley have them off to a good start as he has thrown for 817 yards — the seventh most in the first two games of a season — and four TDs, while the defense has five sacks and three takeaways.

“They’re explosive,” Dolphins coach Brian Flores said. “They’re really moving the ball. Derek Carr does a great job. I should always mention him first. He’s done a great job of taking total control of that offense, putting them in good positions to have success. He finds the matchups. He knows what defenses he’s looking at. And then defensively, I think Gus Bradley is doing a real nice job of getting those guys coached up.”

The Dolphins are coming off a 35-0 loss at home to Buffalo and will be playing a backup quarterback with Jacoby Brissett taking over for Tua Tagovailoa, who hurt his ribs in that game.

Brissett considers himself a starting quarterback, and for this week, he is. He’ll start for the first time since the final week of the 2019 season. Among the 31 active quarterbacks with at least 1,000 career throws, Brissett’s completion rate of 59.6 percent and his quarterback rating of 82.3 both rank 27th. He’s 12-20 as a starter — going 3-3 in his first six, then 9-17 since.

While the Raiders have been passing effectively, the run game has stalled. Las Vegas had 52 yards on 25 carries last week with Josh Jacobs out and the offensive line dealing with injuries. Jacobs' status is unknown this week, but the bigger issues are with the blocking. Raiders running backs are averaging only 2.39 yards per carry for the season.

“It’s hard to run the ball against certain defenses,” coach Jon Gruden said. "With that being said, you have to find other ways to move the ball and right now we’ve improved a little bit in the passing game. We’re not there yet either. But against Miami it’s going to be a very, very difficult day throwing and running, and the tape proves that.”

Miami won at New England to open this season. The Dolphins haven’t started a season with consecutive road wins since 2013, part of a 3-0 start to that season. It didn’t ultimately mean much; Miami lost eight of its final 13 games that year and finished 8-8.

The Raiders have gotten a big boost defensively from free agent cornerback Casey Hayward. Las Vegas signed the 32-year-old Hayward after he had a down year with the Chargers in 2020. But he has experience playing for Bradley and has thrived so far in the system. He's been targeted five times so far this season and hasn't allowed a single catch, according to Pro Football Focus.

The Dolphins were 4-1 last season (with wins in their last four) in games immediately following a loss, not counting the season-ending loss to Buffalo. It was a huge improvement over 2019, when Miami was 3-8 in the games that came after a defeat.