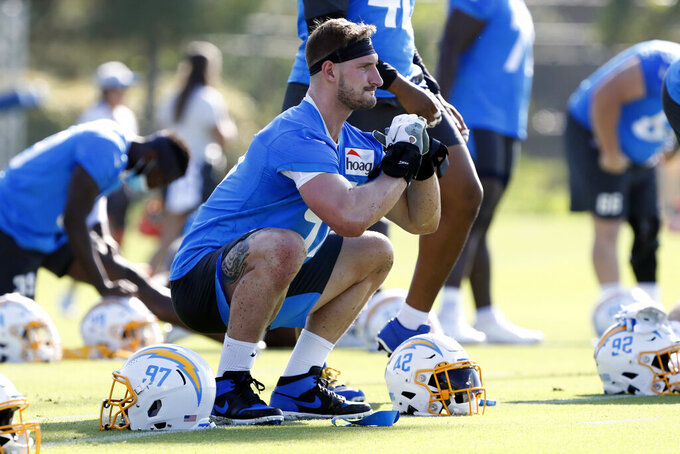 The Pro Bowl defensive standout for the Los Angeles Chargers has a lot more on his plate this year.

Bosa is still going to be counted on to rush the passer but he will also be asked to do much more in the 3-4 scheme brought in by new coach Brandon Staley. Bosa will be lining up mostly as an edge rusher and an outside linebacker, meaning he is going to be dropping into coverage on occasion for the first time in his career.

“This is something that I really have to put some time and study into, and it’s actually enjoyable. It’s pushing me to work even harder and expand that part of my game,” he said.

Bosa said that in the past, studying meant looking at opposing offensive tackles on film and determining what moves would work best. Now it is understanding formations, shifts and seeing more of the field.

“A good defense shouldn’t be easy to learn in two days, so it’s a fun challenge. I get to judge myself on another level, and it’s fun,” he said. "I’m going to make a few mistakes here and there, but by the time camp is over, I’m sure it’ll be second nature.”

Bosa is also being asked to make the same adjustment that Denver's Von Miller, Chicago's Khalil Mack and the Rams' Aaron Donald did in the past. All three thrived and became more well-rounded players.

Even without a new coach or defense, Bosa was working toward adding more to his game as well as becoming more of a team leader after becoming the league's highest-paid defensive player last season with a five-year extension.

“All the really good players want to be great at everything that they do. So whatever we ask him to do, he’s paying attention in the meeting rooms to find out all the details,” outside linebackers coach Jay Rodgers said. “There’s a couple new tricks that we’re teaching him that maybe will add to his game.”

Staley isn't expecting Bosa to cover Kansas City wide receiver Tyreek Hill and there's enough trust between everyone that Bosa isn't being put in a scenario where he is going to struggle.

Bosa is also relishing the challenge of other players pushing him when it comes to knowing the defense. Bosa said he got a wake-up call early in camp when rookie defensive end Chris Rumph II was reciting the plays more comfortably than Bosa.

Bosa is hoping to get off to a quick start for the second straight season. He recorded sacks in the first three games for the first time in his career last season and had at least half a sack in five of the first six. He ended up missing four games late in the season due to concussions and a shin injury.

“I’m just going to try to put my ego aside and do the best I can to be a good team player and learn it the best I can. I’m going to study and be here for the young guys," Bosa said. "Before, like I said, I was kind of solely focused on my pass rush, but now I really want to get an up and down understanding of the defense and just understand football on another level. And, it’s fun.”