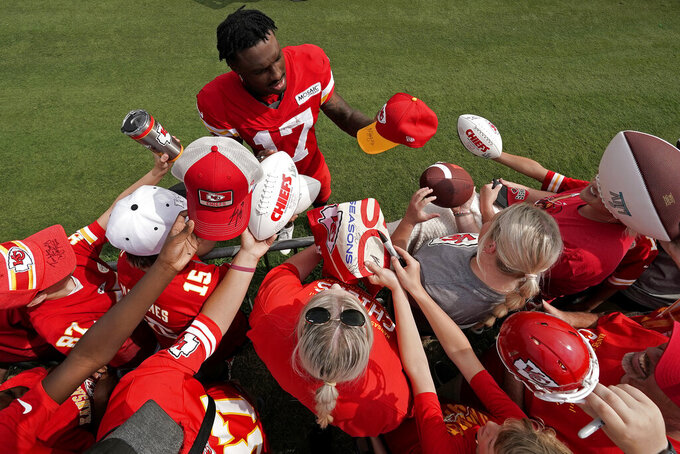 Strengths: The offense will be the Chiefs' strength so long as Patrick Mahomes is under center. He's coming off another big season that ended with an AFC title game loss to Cincinnati. His supporting cast changed dramatically when the Chiefs traded WR Tyreek Hill to the Dolphins for a package of draft picks, but the change could serve to make Kansas City even tougher to defend. No longer can defenses hone in on Hill and TE Travis Kelce because WRs JuJu Smith-Schuster, Marquez Valdes-Scantling and Skyy Moore give the Chiefs more depth and versatility than at any point under coach Andy Reid. Throw in the fact that Kansas City has quietly built one of the top offensive lines in the league, and that Reid remains one of the most creative offensive minds in the game, and opposing defensive coordinators should be having fits all season.

Weaknesses: While the Chiefs offense went haywire in the second half of the AFC title game, their defense is what plagued them throughout the stretch run. More specifically, their inability to pressure the passer — the Chiefs were better than just three other teams in the league at sacking the quarterback. They lost DE Melvin Ingram and struck out early in free agency, so they brought back DE Frank Clark on a restructured contract and drafted DE George Karlaftis in the first round. Then they finally added some veteran help midway through training camp with the addition of DE Carlos Dunlap, a two-time Pro Bowl pick who is coming off an up-and-down season in Seattle. The pass rush should also improve if the downfield coverage gets better, and the Chiefs addressed that by using another first-round pick on CB Trent McDuffie, a fourth-rounder on CB Joshua Williams and signing SS Justin Reid in free agency.

Camp Development: Chiefs GM Brett Veach has done well the past few years finding late-round gems in the draft, and he may have hit on two more in the seventh round this year. CB Jaylen Watson was overlooked coming out of Washington State, but ran with starters during portions of training camp, and RB Isaih Pacheco has far surpassed the expectations that came with him from Rutgers. Pacheco could push incumbent Clyde Edwards-Helaire for the starting role this season.

Fantasy Player To Watch: Someone has to absorb all those catches, yards and touchdowns that Hill had last season, and it's a stretch to believe TE Travis Kelce can do much more than he did last season. So it boils down to whether Smith-Schuster can regain the form that made him a star early in his career in Pittsburgh or Valdez-Scantling can overcome the drop issues he had while catching passes from Aaron Rodgers in Green Bay. At least one of them should have a big year.

Expectations: The minimum is a seventh consecutive AFC West title, a job that hasn't gotten any easier with the Broncos adding QB Russell Wilson, the Raiders loading up with WR Davante Adams and the Chargers' emergence behind QB Justin Herbert. Throw in the out-of-division slate and the Chiefs have a brutally difficult path to hosting a fifth consecutive AFC championship game, let alone reach the Super Bowl in Glendale, Arizona.