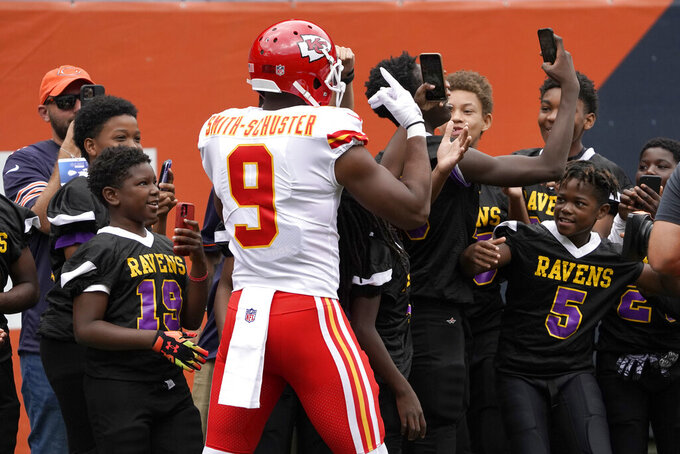 KANSAS CITY, Mo. (AP) — Ever since Marquez Valdes-Scantling signed a free-agent deal with the Chiefs this past offseason, the veteran wide receiver has had people asking him what he's doing right in life to earn such good fortune at quarterback.

Must be something to go from spending four years with Aaron Rodgers to catching passes from Patrick Mahomes.

Yet the same question could be posed to Justin Watson, who has spent the past two seasons catching balls from Tom Brady, or JuJu Smith-Schuster, who spent his first five years in the NFL hauling in heaves from Ben Roethlisberger.

Because when the Chiefs decided to replace Pro Bowl wide receiver Tyreek Hill with a committee approach earlier this year, they landed a trio of playmakers for Mahomes that bring along the unique experience of playing with elite quarterbacks.

It's something Mahomes noticed right away, too.

“The biggest thing coming from quarterbacks like that," Mahomes explained, "and especially the ones that played a long time and been great for a long time, is they understand how to do stuff the way the quarterback wants it done.”

Not necessarily how a play is drawn up on paper.

“All three of those guys,” Mahomes continued, “whenever you tell them something, they make sure to make that adjustment in their routes, because they know that's kind of what they dealt with their entire career.”

Valdes-Scantling, a fifth-round pick of the Packers in 2018, caught 123 passes for 2,153 yards and 13 touchdowns with Rodgers as Green Bay's starting quarterback. And there may be no quarterback in the league that demands more trust from his wide receivers than Rodgers, who has a penchant — much like Mahomes — for making things up on the fly.

Watson, also a fifth-round pick in 2018, spent his first two seasons in Tampa Bay with Jameis Winston under center, then the past two with Brady, which included their run through the Chiefs to the Super Bowl title two years ago.

Smith-Schuster has the highest profile of the three after five seasons in Pittsburgh. It was there that he caught the end of Roethlisberger's career, along with 323 passes for 3,855 yards and 26 touchdowns despite a slew of injuries.

Rodgers, Brady and Roethlisberger are all Super Bowl champions. In fact, they have combined to hoist the Lombardi Trophy 10 times, along with making 31 trips to the Pro Bowl, winning seven MVP awards and six Super Bowl MVPs.

In other words, they all played at a similarly elite level to Mahomes, who also has a Super Bowl ring around his finger along with making four trips to the Pro Bowl and winning an MVP award of his own.

“Sometimes when you get guys from other places, they just run the route how it's supposed to be ran,” Mahomes said, “but these guys have a great understanding of not only running the route, but understanding the coverage as they're running it and how it affects everybody.”

Mahomes tried to speed up the acclimatization process for the newcomers during the offseason, when he invited each of them to his home in Texas for some unscripted workouts. It was done with the blessing of Chiefs coach Andy Reid, and it gave them an opportunity to learn what Mahomes wants out of them before training camp even began.

The work appeared to pay off in the preseason: Kansas City reached the end zone every series the starters played.

Now it's time to see whether it pays off in the regular season, which begins with a trip to Arizona on Sunday.

NOTES: Chiefs DE Frank Clark did not practice Thursday because of an illness. He was a full participant Wednesday after missing two workouts last week with an illness. ... LBs Nick Bolton and Elijah Lee, who have lockers next to each other, spent time ribbing each other before practice Thursday. Bolton starred for Missouri and Lee for Kansas State, and former Big 12 rivals play for the first time in more than a decade on Saturday.