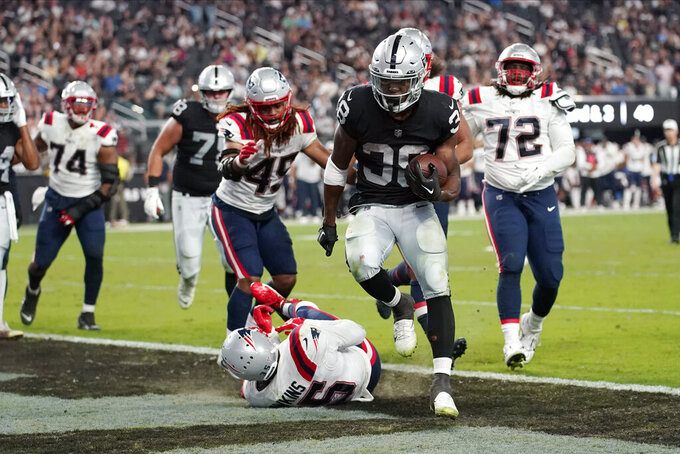 Las Vegas Raiders running back Brittain Brown (38) runs into the end zone for a touchdown during the second half of an NFL preseason football game against the New England Patriots, Friday, Aug. 26, 2022, in Las Vegas. (AP Photo/John Locher)

“This is always one of those days, you know the last couple of days, a little difficult, but I think our guys handled it great,” McDaniels said. “We got 53 guys now and it’ll be a process, obviously it’ll change many times between now and the end of the season.”

Part of getting to the final 53 included waiving Leatherwood on Tuesday. The former Alabama lineman continued his struggles on the offensive line. He was moved from tackle to guard during his rookie season under the previous Raiders coaching staff, and was given an opportunity at right tackle this offseason with McDaniels’ staff. The 17th overall pick in the 2021 draft was claimed off waivers by the Bears on Wednesday.

“We’ve talked about competition since we came here in every position group, and trying to give every player an opportunity to earn his job and to earn his role, whatever that role may be,” McDaniels said.

“It gave everybody an opportunity to go out there and play and really perform. There’s a lot of tough decisions that you make across the roster. And you hope you get them all right. We’re not perfect at that, so hopefully, we did the best we could for our team. So, wish Alex nothing but the best. He did everything he could here to try to earn his role here.”

McDaniels doesn’t anticipate adding any other lineman, for now, saying “it’s eight-plus whatever the practice squad is going to be.”

He added there is no preset expectation of when or if that will change.

Another move on Tuesday was trading 2019 second-round pick Trayvon Mullen to the Arizona Cardinals for a conditional draft pick. The Raiders will receive a 2023 seventh-round pick that could be upgraded to a sixth-rounder based on Mullen’s playing time this season.

“We’ve had some guys that have shown up at that position and really done some good things,” McDaniels said. ”(Undrafted rookie cornerback) Sam (Webb) was one of them.”

“It’s really not about how you got here, it’s about what you do when you get here,” McDaniels said. “And those guys, they’ve been out there every day, they’re durable. They’ve performed when they’ve had their opportunities. They’ve improved. They work really hard. And it’s important to them.

"The competition doesn’t end today or yesterday. You got to continue to earn that and those guys have definitely shown the attitude and the effort to be able to do that.”

After cutting veteran running back Kenyan Drake last week, the Raiders will carry five running backs into the regular season.

Josh Jacobs — whose name was thrown around as a trade possibility — leads the group along with veterans Brandon Bolden and Ameer Abdullah, and rookies Zamir White and Brittain Brown.

Brown was thought to be on the roster bubble, but McDaniels said his staff “felt pretty good about the group” assembled.

“They’ve all showed an ability to perform, either on first, second, third down, and in many cases fourth down,” McDaniels said. “Brittain just came in and he’s grinded away, and learned, improved, worked hard. When he had his opportunities in games, did well. And he’s competed really hard in the kicking game. Can’t say enough about a lot of the young guys we have, in terms of the way they came in and approached this.”

McDaniels said he was excited to see Darren Waller back at practice, as the star tight end was expected to return to the field hours after it was announced he hired new agents with hopes of getting a new contract before the season opener on Sept. 11.

Waller cut ties with Klutch Sports last week after less than a year with that agency and signed Wednesday with Drew Rosenhaus and Robert Bailey.

Asked via text if there was an ETA for Waller’s contract signing, and if he expected a deal in place by the season opener, Rosenhaus replied: “Would like to get a deal done asap.”