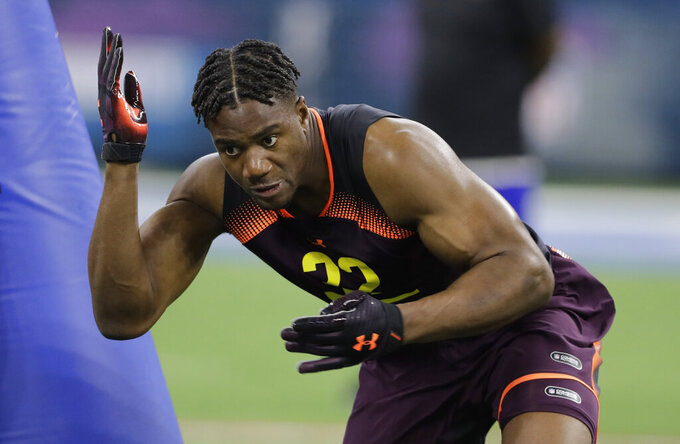 FILE - In this March 3, 2019, file photo, Stanford linebacker Bobby Okereke runs a drill during the NFL football scouting combine in Indianapolis. Indianapolis Colts general manager Chris Ballard did his homework on Bobby Okereke. And a sexual assault allegation from 2015 still didn’t scare him off. Just hours after Okereke’s name surfaced publicly for the first time in the case, Ballard told local reporters on a conference call that he took a hard look at Okereke’s past and made others in the organization aware of the accusation before selecting the Stanford graduate in April’s NFL draft.(AP Photo/Darron Cummings, File)

INDIANAPOLIS (AP) — Indianapolis Colts general manager Chris Ballard did his homework on Bobby Okereke. A sexual assault allegation from 2015 didn't scare him off.

Just hours after Okereke's name surfaced publicly for the first time in the case, Ballard told reporters on a conference call he took a hard look at Okereke's past and made others in the organization aware of the accusation before selecting the Stanford linebacker in April's NFL draft.

Okereke has not spoken about the incident since it was first reported by The Fountain Hopper, an independent student-run website at Stanford. The New York Times initially reported on the case in December 2016, without naming the parties involved, and said a university board twice voted 3-2 in favor of the accuser but that no punishment was assessed because Stanford policy required a vote of at least 4-1. The Times also reported the university denied the accuser's request for a third hearing.

Ballard said he learned of the allegation when Okereke addressed it during their first meeting at the Senior Bowl in January.

The Colts, Ballard said, then spoke multiple times with Okereke, contacted Stanford officials and reached out to others close to Okereke to create a more complete picture of the NFL prospect. Ballard said nobody spoke to the accuser or her attorney.

Ballard also made Colts owner Jim Irsay aware of the accusation prior to taking the 6-foot-1, 239-pound linebacker with a third-round pick, No. 89 overall.

"I don't want to sit here and act like we don't have sympathy for both sides," Ballard said, noting that he has three daughters. "It happened four years ago, and because there were no charges and no disciplinary action taken by the university, and because of his track record since, we felt comfortable drafting him."

Okereke recorded 96 tackles for the Cardinal in 2017 and 2018 and was named to the Butkus Award and Bednarik Award watch lists. He also was a quarterfinalist for the Lott Trophy, which is awarded annually to the nation's top defensive player for his performance on and off the field.

The Colts believe Okereke can add depth to an improving linebacker group and perhaps may emerge as a future starter.

"He was very honest about his side of the story and what occurred and how he had to move forward," Ballard said. "It's a very sensitive subject and it's hard, I get that.

Ballard added: "We talked it through and at the end of the day it falls on me."