Comedy of errors as Steelers, Lions slog to 16-16 tie 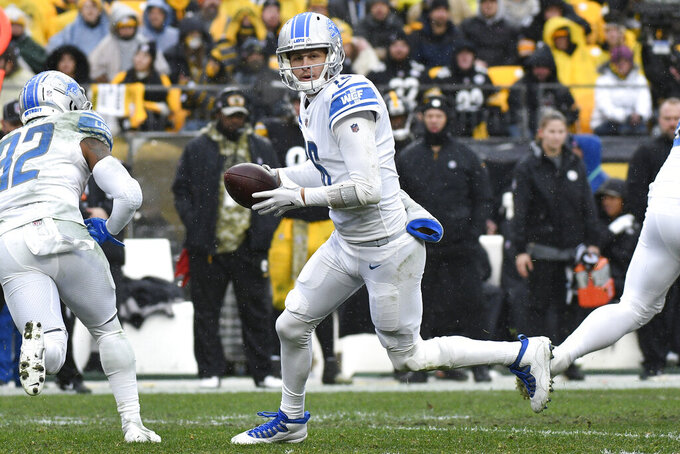 Detroit Lions quarterback Jared Goff (16) rolls out while looking to pass during the second half of an NFL football game against the Pittsburgh Steelers in Pittsburgh, Sunday, Nov. 14, 2021. (AP Photo/Don Wright)

PITTSBURGH (AP) — Detroit's long losing streak is over. The threat of a winless season still remains.

For now, the Lions will take it, no matter how ugly it looks.

The Lions slogged their way to a 16-16 tie in dreary Pittsburgh on Sunday, surviving a nearly four-hour marathon against the Ben Roethlisberger-less Steelers that ended with Detroit mercifully avoiding the loss column for the first time in nearly a year.

Sure, it wasn't a win. Still, it beat the usual alternative, a feeling the Lions (0-8-1) had endured since knocking off Chicago on Dec. 6, 2020, a stretch of 12 games over 11 sometimes agonizing months.

“I don’t know how to feel about that, necessarily," first-year Detroit coach Dan Campbell said. “It’s like I told the guys, I was upset we didn’t win, but I was also proud of them because of the fact that we put ourselves in position to win the game in overtime.”

Only they didn't. Then again, neither did the Steelers (5-3-1), who saw their four-game winning streak halted by hardly looking like a team ready for life without Roethlisberger.

The Steelers (5-3-1) were forced to play without their 39-year-old franchise cornerstone when he went onto the COVID-19 list on Saturday night after testing positive. Head coach Mike Tomlin said Roethlisberger is symptomatic, leaving the two-time Super Bowl winner's status for next week at the Chargers up in the air.

Mason Rudolph completed 30 of 50 passes for 242 yards with a touchdown and an interception in Roethlisberger's absence. He didn't exactly make a compelling case that he is the heir apparent.

Sloppy when he needed to be steady, Rudolph struggled in key situations. He underthrew an open Ray-Ray McCloud in the end zone in the third quarter, and overcooked a slant to Diontae Johnson in the fourth on what should have been an easy third-down conversion in Detroit territory.

“We all have plenty to correct, trust me,” Rudolph said. “There are plenty of balls I'd like to have back.”

Najee Harris ran for 105 yards and at times appeared to be Pittsburgh's only consistent offensive weapon.

Then again, the only consistent thing might have been the steady stream of punts. Jack Fox booted it 10 times for Detroit, tying the most in a game this season.

When they weren't punting, the Lions were manhandling Pittsburgh's defensive front. De’Andre Swift rushed for a career-high 130 yards as Detroit relied heavily on the run with quarterback Jared Goff rendered almost completely ineffective. The Lions ran for 229 yards, only the ninth time in 51 years the Steelers have allowed more than 200 on the ground at home.

“Our run game was tremendous,” Goff said. “It felt purposeful. It felt like we were really on top of what we were doing offensively. It was something we can build on.”

Goff connected on 14 of 25 passes for just 114 yards while playing with a strained oblique as the NFL saw its first tie since Cincinnati and Philadelphia on Sept. 27, 2020. Detroit's previous tie was against Arizona in the 2019 season opener, while Pittsburgh's last tie came in Cleveland in Week 1 of 2018.

THEATER OF THE ABSURD

Campbell described the afternoon as “the twilight zone,” one that took a turn for the weird and the comic in overtime as both teams squandered multiple opportunities.

Rudolph hit Johnson for a 39-yard gain down the sideline on Pittsburgh's first possession of the extra period, but Johnson fumbled while fighting for extra yards. Detroit's Amani Oruwariye fell on it at the Lions 45.

The Lions, helped greatly by a pair of defensive penalties against the Steelers, moved in position for a 48-yard field goal attempt. But Ryan Santoso, filling in for injured Austin Seibert, saw his kick flutter well short into the open end of the stadium.

The Steelers had one last shot as time wound down. But rookie tight end Pat Freiermuth fumbled near the Detroit sideline with 9 seconds left. A series of laterals by the Lions on the final play ended far short of the end zone as the clock mercifully hit all zeros.

“We didn’t win, but we didn’t lose either,” Campbell said. “All you can ask for is improvement and we improved.”

The Steelers, not so much. On a weekend in which AFC North rivals Cleveland and Baltimore both lost, Pittsburgh missed an opportunity to pull into a tie for first with the Ravens.

Lions: Lost RB Jemar Jefferson to an ankle injury suffered at the end of his 28-yard touchdown run in the second quarter. ... S Tracy Walker was placed into the concussion protocol following a third-quarter collision with Rudolph. ... OLB Trey Flowers left in the third quarter with a knee injury but returned. ... Tackle Matt Nelson exited in the third quarter with an ankle injury.

Lions: travel to Cleveland next Sunday.

Steelers: begin a difficult two-month stretch to end the season with a prime-time matchup against the Chargers.