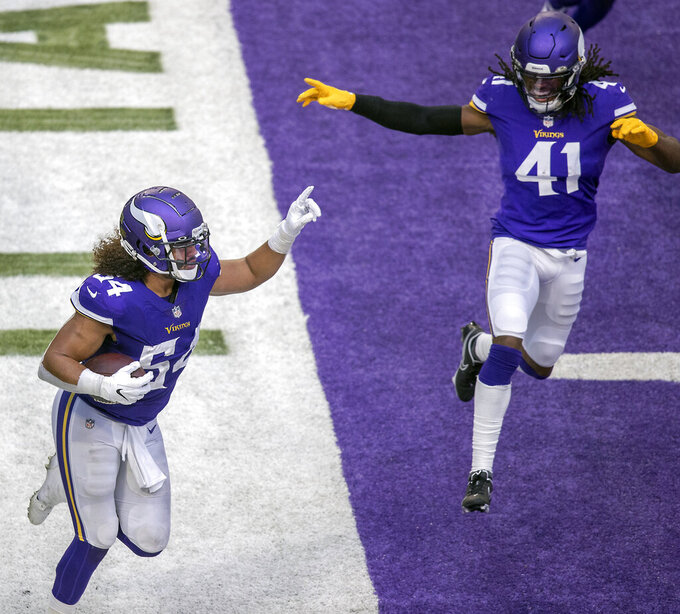 MINNEAPOLIS (AP) — The Minnesota Vikings stumbled through the first six games, looking like a team ripe for a teardown as they entered their bye week.

Dalvin Cook never broke stride, and suddenly the Vikings have an opportunity to be running at a playoff race pace down the stretch. His show-stopping performances not only keyed victories over Green Bay and Detroit that brought the Vikings (3-5) to the midpoint of the season, but his ability and attitude have managed to rev up the entire roster.

“Just the way he runs the ball I feel like is inspiring to me as a teammate,” said All-Pro linebacker Eric Kendricks. “When I’m about to go out on defense and play my position, I see Dalvin and how he’s putting in work, how he’s taking hits, how he’s finishing runs. I want to be able to match my teammate and his effort, his desire and his fire. I feel like that kind of energy is contagious.”

After sitting out one game to let a groin injury heal, Cook totaled 478 yards and six touchdowns from scrimmage over the past two weeks. The Vikings racked up 275 rushing yards against the Lions, their most since establishing the franchise record (378) on Nov. 4, 2007, when Adrian Peterson also set the NFL single-game record.

“We've got a bunch of young guys on this team just looking for somebody to grab them and show them the ropes,” said Cook, who's in his fourth season. “I've been there before.”

The offensive linemen, tight ends and Pro Bowl fullback C.J. Ham, who played 59% of the snaps on Sunday, have been thriving in the zone-blocking scheme devised by offensive coordinator Gary Kubiak and directed by offensive line coach Rick Dennison. Pass protection has been stronger, too.

The play-calling had the Lions on their heels for most of the afternoon, never more than during a six-play, 87-yard touchdown drive the Vikings finished in 64 seconds as the second quarter waned with either short throws or running plays. Cook took an inside handoff and darted for 13 yards off left end and out of bounds at the 22, draining only 5 seconds off the clock.

With four of their top six cornerbacks sidelined in an inexperienced group already facing a steep learning curve, the Vikings showed signs of improvement in pass defense against the Lions. Three interceptions, two by linebackers and one by a safety, covered up for some of the lapses. First-round draft pick Jeff Gladney had perhaps his most complete game but still has a long way to go.

“Just everyone knowing the scheme, knowing where our help is,” Gladney said. “We’re all learning.”

Left tackle Riley Reiff, who would have been released before the regular season started had he not accepted a $5 million pay cut so the Vikings could squeeze defensive end Yannick Ngakoue under the cap, was the subject of trade talk leading up to the deadline last week. Reiff was only on the block for potential salary savings and draft pick acquisition, because the ninth-year blocker has played superbly for a team that leads the NFL in average yards per play (6.64).

“He’s the definition of the kind of veteran you want in your room,” Dakota Dozier said. “He’s definitely the leader of our O-line. He sets the tone for the work ethic of our group. He comes in and busts his butt in the weight room, gets it done in practice, gets after it on the game field. It’s just easy to look at that and say, ‘Hey, that’s what this O-line should be about.’”

Punter Britton Colquitt, who had a solid first season with the Vikings, has not provided nearly the same field-position boost this year. While Colquitt has added value as a reliable holder, he's last in the league with a net average of 35.5 yards and second-to-last in percentage of punts landed inside the 20-yard line. Colquitt had two tries blocked by the Lions, prompting coach Mike Zimmer to demand a better overall performance by the special teams units.

Tight end Irv Smith Jr. left in the third quarter on Sunday with an apparent upper leg injury, after his second touchdown catch of the game. Right guard Pat Elflein, recovering from thumb surgery while rookie Ezra Cleveland has taken over his spot, must either be activated this week or stay on injured reserve for the remainder of the season.

627 — Justin Jefferson's receiving yardage total, the most in Vikings history by a rookie through eight games. He topped the 593 yards Randy Moss amassed in the first half of the 1998 season.

The Vikings have a four-game losing streak to the Bears, who are one of the three teams currently ahead of them for the last NFC wild-card spot. With a win in Chicago, where they are 3-14 since the renovated Soldier Field reopened in 2003, they'll have a prime opportunity to take a winning record into the last quarter of the season. They have consecutive home games against Dallas, Carolina and Jacksonville, a trio with a combined 6-20 record.

“Part of it is sticking to it," Zimmer said, "and believing you can get some wins."