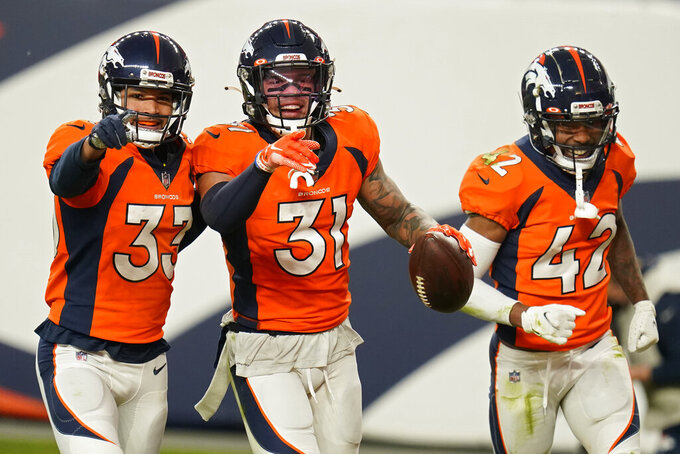 Denver Broncos safety Alijah Holder (33), free safety Justin Simmons (31) and cornerback Parnell Motley celebrate after Simmons made an interception against the Las Vegas Raiders during the second half of an NFL football game, Sunday, Jan. 3, 2021, in Denver. (AP Photo/Jack Dempsey)

DENVER (AP) — This time, Shelby Harris wasn't there to knock down Derek Carr's 2-point conversion pass in the closing seconds.

Carr's revenge came three days after the Broncos put Harris, who leads the league's D-linemen with 16 pass breakups since 2019, on injured reserve with a knee injury.

“Two-point play. Same spot in the end zone. Same everything,” Carr said. “Defensive linemen jumping in the air, but this time they didn’t touch it.”

The Broncos (5-11) reached the Las Vegas 45-yard line with 9 seconds left and Brandon McManus' 63-yard field-goal try was blocked by Maxx Crosby, who also blocked McManus' record 70-yard attempt on the last play of the first half.

With that, the Raiders (8-8) avoided a fourth straight losing season and a 10th consecutive loss in their season finale. They also handed coach Jon Gruden his first win in Denver in eight tries.

“It’s great to settle that score. There were a few teams there with Mike Shanahan, they looked forward to seeing us come to town," Gruden said, adding, "I’m glad you said that. I’m going to have a Coors Light before I leave.”

The Raiders appeared headed for another hangover with four turnovers, including three in a five-snap span in the second half, against a team that had only a dozen takeaways coming in.

But Josh Jacobs' 1-yard TD run with 24 seconds left capped a seven play, 77-yard drive and for the second straight year, Gruden went for 2 and the win instead of a tie.

“Funny about that, is right before that drive, I went to coach and said, ‘Hey, we’re going to win this game. So get your 2-point play ready,’” Carr recounted. “Of course, every memory of Shelby Harris came into mind, him batting the ball down. Shout out Shelby, hope he feels better.”

But Gruden’s mind was racing when Jacobs scored the touchdown and he kept changing the call.

“It may have looked more panicked than it was, because we knew what play we were running and we knew what we were about to do,” Carr said. “Then they called timeout and gave us time to really get set. It was nice. it was nice — same area. You couldn’t draw it up better."

Were the Raiders really that sure?

“First, we didn’t know the call,” Jacobs said. “We didn’t know the personnel. We had people running back in off the field. When they called timeout, they really kind of helped us with that. We would’ve been scrambling.”

Fangio said he called timeout because “we just wanted to make sure that we knew exactly who they had in there and how we wanted to play it. ... I would like to have saved it, obviously, but the game” was on the line.

The Broncos had taken a 31-24 lead with 6:29 left on Jerry Jeudy's 92-yard touchdown catch from Drew Lock, who threw for a career-high 339 yards and didn't commit a turnover for the first time in three months.

The Broncos, whose minus-16 turnover differential this season was by far the NFL’s worst, got two forced fumbles from rookie cornerback Michael Ojemudia and interceptions from Justin Simmons and Kareem Jackson.

Jeudy caught five passes for a career-best 140 yards a week after his five drops cost Denver a sweep of the Chargers, prompting Fangio to say it could be a career-defining moment for the rookie from Alabama.

“The way I'm wired I knew the last game, that was going to be one of the last bad games I have my whole life," Jeudy said. “I learned a lot from that game. Coming into this game, I was just a lot more focused on the details and just catching the ball.”

Crosby kept McManus from setting the NFL record with an 11th field goal of 50-plus yards.

“There were some holes in their protection,” Crosby said. "Some of their linemen are a little bit lazy on their protection. I’m not going to single anybody out, but you could definitely see it if you watched the film.”

The Broncos honored Hall of Famer Floyd “The Franchise" Little with a moment of silence. Little died Friday after a long battle with cancer.

“Floyd was a great player,” Fangio said. “I remember him when I was a kid watching him and he was one of my favorite players growing up. So, great player, sad to see him go. One of the all-time great Broncos.”

Raiders: CB Trayvon Mullen (shoulder) got hurt in the first half.

Broncos: WR Tim Patrick left with a foot injury in the first half. By halftime the Broncos were playing with both backup guards after RG Graham Glasgow (shoulder) and LG Dalton Risner (ankle) went out.

Raiders: Decisions on who will be the new defensive coordinator, whether to re-sign WR Nelson Agholor after his big season on a $1 million deal or look for someone else and whether to bring back Trent Brown at $14 million after he’s been available less than half the time the past two seasons.

Broncos: Decisions on whether Lock is their guy heading into 2021, whether to exercise Von Miller’s option year at $22.225 million and whether to pony up the big bucks to keep Simmons and Harris, whom they sorely missed at the end Sunday.