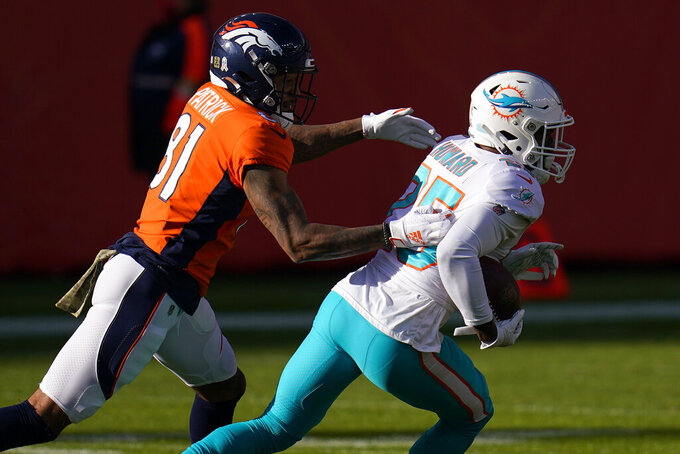 MIAMI (AP) — Ryan Fitzpatrick knows how interceptions can change a game because he has thrown 169 of them, which makes him a big fan of teammate Xavien Howard.

The Miami Dolphins cornerback leads the NFL with seven interceptions.

“It’s a great feeling to be sitting on the bench looking at the tablet, and somebody handing you your helmet and saying, 'Hey, we’re back up. X got another interception,'" Fitzpatrick says. "It’s unbelievable. He has always got his hands on the ball. He’s a pretty special player.”

Howard is the chief catalyst in the remarkable improvement by the Dolphins' defense this year. His shutdown skills against some of the league's top receivers have allowed Miami (7-4) to flummox foes with a high-risk, blitz-happy scheme that demands tight one-on-one coverage by the secondary.

“It’s inspiring the way he gets his hands on the ball,” teammate Nik Needham says. “It’s like, man, you’re trying to keep up and make as many plays as that man. He’s a great player.”

Even so, he leads the NFL with 19 interceptions since 2017. Now, at 27, he's healthy and playing better than ever.

Howard and Byron Jones form perhaps the league's best cornerback tandem on a team that ranks second in the league in points allowed per game. But while Jones is steady, Howard is a playmaker.

Along with being on pace for the NFL's first double-digit season in interceptions since 2007, he's tied for second in the league with 15 passes defended.

“He has really put in consistently some good all-around performances,” Boyer says, "becoming a complete corner and doing it very consistently for a long period of time. It’s really a credit to him and his work ethic that we’re seeing strides on a week-in and week-out basis.”

Last week, the New York Jets' Sam Darnold threw Howard's way 10 times. The results: one interception and three completions for 37 yards and a passer rating of 2.9.

“I’m not surprised,” he says. "Each week I’m probably on the best receiver on the team, so I’m expecting for them to throw the ball to that guy, no matter who’s on him. They feel like they want to give their guy the best opportunity to catch the ball.

"I’ve just been making the plays on the ball and really just doing my thing.”

The Dolphins are trending upward, and so is their best player.

“I feel like I’m just getting better," Howard says. “I kept that attitude coming off of injury of being hungry. For me, I feel like the sky is the limit.”