EXPLAINER: Not indicted, what's next for Deshaun Watson? 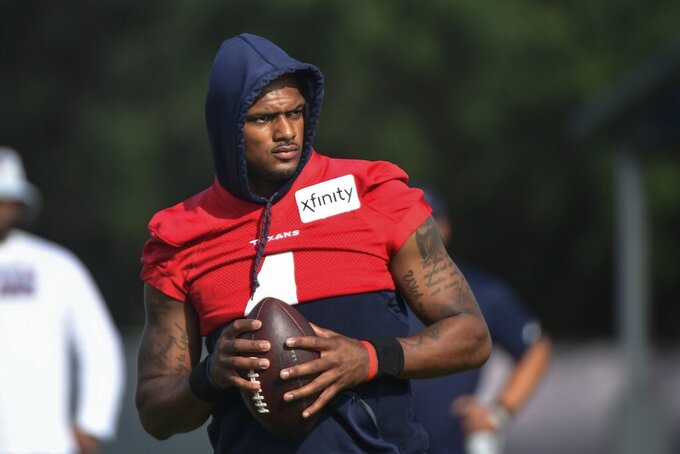 HOUSTON (AP) — A grand jury declined to indict Deshaun Watson on Friday following a police investigation sparked by lawsuits filed by 22 women who have accused him of sexual assault or harassment.

But there are still plenty of questions surrounding the Houston Texans star quarterback and when he could return to the field after missing the entire 2021 season.

Here’s a look at some of the key issues surrounding Watson and his future in the NFL.

ARE WATSON’S LEGAL TROUBLES OVER?

But Watson is still facing separate civil proceedings for lawsuits filed by the 22 women who claim he harassed or assaulted them during massages.

Watson was questioned in a deposition for one of those lawsuits for the first time Friday. Tony Buzbee, who is representing all the women accusing Watson of misconduct, said the process of questioning Watson as the lawsuits move toward trial will continue.

No trial date has been set for the lawsuits.

WHY DID WATSON SIT OUT LAST SEASON?

Watson has not been punished by the NFL for these accusations. He asked for a trade in January 2021 more than two months before the first woman came forward and did not play for the Texans last season because of that request. Watson has not changed his stance on playing in Houston, forcing the team to try and deal him elsewhere.

COULD HE STILL BE DISCIPLINED?

Watson could still face punishment from the NFL despite not being charged criminally. NFL spokesman Brian McCarthy said last week that the league is “closely monitoring all developments” and that matter “remains under review of the personal conduct policy.”

A player does not have to be convicted or even charged with a crime to be disciplined under the league’s personal conduct policy.

In 2010, former Steelers quarterback Ben Roethlisberger was suspended for six games for violating the policy a week after prosecutors decided not to charge him in a case involving a college student who accused him of sexually assaulting her in a Georgia nightclub. The suspension was reduced to four games after he followed the league’s guidelines and stayed out of trouble over the next few months.

In a letter to Roethlisberger announcing the punishment, NFL commissioner Roger Goodell stated in part that: “The Personal Conduct Policy makes clear that I may impose discipline ‘even where the conduct does not result in conviction of a crime’ as, for example, where the conduct ‘imposes inherent danger to the safety and well-being of another person.’”

DO OTHER TEAMS HAVE INTEREST IN TRADING FOR HIM?

The Texans tried to trade Watson before the deadline last November and were said to have been close to sending him to Miami. But they were unable to complete a deal with the criminal charges still pending. With that no longer an issue, Houston is expected to have many suitors starting Wednesday, which is the first day he can be traded.

Despite his legal troubles, Watson, who was a first-round pick in 2017, is still attractive to many teams after proving to be one of the top young quarterbacks in the league in 2020. That season Watson, who won a national championship at Clemson, led the NFL with a career-high 4,823 yards passing and had 33 touchdown passes. The 26-year-old is a three-time Pro Bowler, who has amassed more than 14,000 yards passing in his four-year NFL career despite playing just seven games as a rookie because of an injury.

The Dolphins were interested in trading for him before the November deadline, but it's unclear if they're still interested. Other teams that have a need at QB and could be in the mix are Carolina, Cleveland, New Orleans and Seattle, among other teams.

Watson has a no-trade clause, so he would have to waive that before any deal could be done.

Houston will expect a big haul in return for him since he’s still under contract for four more seasons after signing a $156 million extension before the 2020 season. The Texans will likely be looking to get multiple high draft picks in any deal for Watson, much like the deal that Denver made recently for quarterback Russell Wilson that included two first-round and two second-round draft picks.