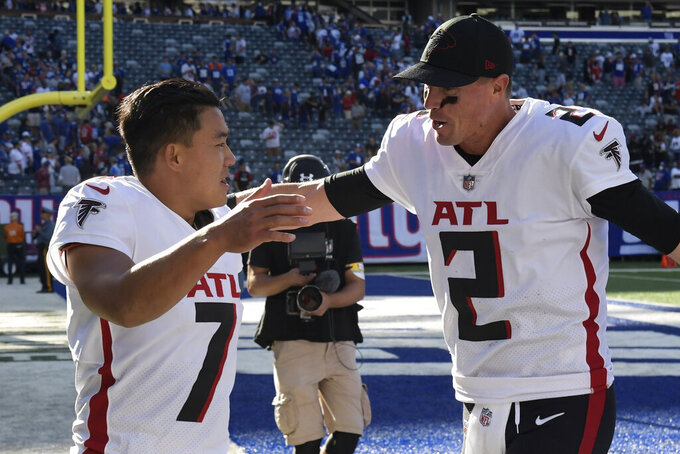 EAST RUTHERFORD, N.J. (AP) — After three games and a lot of ugly football, Arthur Smith finally picked up his first win as an NFL coach and his first game ball, courtesy of Matt Ryan.

As far as celebratory dancing in the Falcons' locker room after their last-second 17-14 win over the New York Giants on Sunday, Smith and owner Arthur Blank declined to take part. There's more work to be done.

“Years from now, you’ll look back but really it’s about everybody in this organization. The credit goes to them, not to me,” Smith said. "Hopefully, we’ll get a lot more wins than just one.

Younghoe Koo kicked a 40-yard field goal as time expired and Ryan threw two touchdowns and led the late, game-winning drive as the Falcons (1-2) handed the Giants (0-3) their second straight loss on the final play.

“Having been around a long time and knowing it’s tough to win in this league, the first time doing it as a head coach, that’s a special moment,” Ryan said. “Hopefully that’s something he’ll always remember, this game up here. That game ball is nice little thing to have to remind you of that. He was fired up.”

Ryan finished 27 of 36 for 243 yards and found Cordarrelle Patterson for 28 yards and rookie tight end Kyle Pitts for 25 on the game-winning, 58-yard drive over the final 1:58. He also threw a 4-yard touchdown pass to Olamide Zaccheaus late in the first half and added a 1-yarder to Lee Smith to tie the game with 4:13 to play.

The loss spoiled a day the Giants retired the jersey of two-time Super Bowl MVP Eli Manning and added his name to the Ring of Honor at MetLife Stadium. Co-owner John Mara was booed by fans at the halftime ceremony with the team trailing 7-6, and the final kick set off more dissention.

New York took a 14-7 lead on a Saquon Barkley’s 1-yard dive and Daniel Jones’ 2-point conversion run with 12:53 left in the game. It was Barkley's first TD since the final game of the 2019 season. He tore his ACL last year.

Ryan then took the Falcons 72 yards in 16 plays to tie it on a drive extended when Adoree Jackson dropped an interception in the end zone and then a penalty before the tying score.

The Giants got to their own 49 on the ensuing series but a sack forced a punt that gave Atlanta, which allowed 40 points a game over the first two, a chance to win.

“We battled and when it was time, we stepped up and made the plays we had to make,” Ryan said. “The last two drives were clutch and really good for us.”

While losing hurts, Barkley believes in this team, which opened last season 0-5 under coach Joe Judge.

“I told the guys that we have something special,” he said after gaining 51 yards on 16 carries. “I don’t know when it is going to happen. But we’ve believe it will. We’ve got to believe in each other and believe in the scheme. And when it happens, we’ve got something special.”

The Giants had two 73-yard drives that faltered late because of sack and a mishandled snap. Graham Gano kicked field goals of 25 and 31 yards for a 6-0 lead.

The Giants retired Manning's No. 10 jersey in a halftime ceremony.

Manning, who retired after the 2019 season, was walked to the stage by his offensive line. He finished his short speech by quoting the last Giants owner Wellington Mara who frequently said: “Once a Giant, always a Giant.”

While the crowd roared for Manning, current co-owner John Mara was booed when he spoke. The Giants have not been to the playoffs since 2016.

Atlanta: DL Marlon Davison sustained an ankle injury late in the first half and did not return.

New York: Inside linebacker Blake Martinez, the Giants leading tackler last season, sustained a knee injury on the opening series and did not return. WRs Darius Slayton and Sterling Shepard also were knocked out of the game in the first half with hamstring injuries.

With the receivers down, Collin Johnson stepped in and had five catches for 51 yards in his first game.

Giants: visit New Orleans on Oct. 3. It will be the Saints first home game since Hurricane Ida displaced the team last month. There was also a fire on the roof of the Caesars Superdome this past week.